In what future historians will look back on as a huge watershed event, the P2 Freemasons—worshipers of the Black Sun and creators of both fascism and communism—are suing for peace, White Dragon Society sources say. This, coming with the removal of the Rothschild family from control of central banks, means the world is about to enter uncharted historical waters.
The P2 Freemasons are proposing that the world “be led by a triumvirate of the sons of the Black Sun, the sons of big Horus, and sons of the Dragon,” according to the proposal conveyed by Vincenzo Mazzara, a cavalier of the Teutonic Knights and the most senior P2 member to contact the WDS.
The “sons of the Black Sun” refers to the P2 Freemasons, who give orders to the Pope and the world’s 1.5 million or so Catholics. The “sons of big Horus” refers to the eye at the top of the pyramid on the U.S. one-dollar bill, presumably referring to non-P2 Freemasons such as the Scotch Rite and Grand Orient who control much of the English- and French-speaking world. The “sons of the Dragon” refers to Asian secret societies who control most of East Asia.
At this point, most readers are probably, and rightly so, appalled at the idea of three secret societies colluding in order to continue to rule in secret. The WDS, of course, wants everything to be open and with full public participation. Nonetheless, the P2 are powerful; they told us in advance they were going to fire Pope “Maledict” (Benedict XVI) and they did so. The P2 also bragged to the WDS that they were the ones responsible for staging the March 11, 2011 Fukushima tsunami and nuclear mass-murder terror incident. Thus, the fact that they are now suing for peace means they know the dragnet is finally closing in on them.
This move is also intimately related to the announcement that Nazi Fourth Reich Fuhrer George H.W. Scherff (Bush) is dead. As Pentagon sources put it, “While the G20 was prepping the world for a global currency reset, 41st President Bush Sr. expired on 11/30 because 11+30=41.” In fact, Bush Sr. died in June, but the announcement was delayed until all the preparations were made to arrest senior Nazionist (Khazarian mafia) underlings like Hillary Clinton and Barack Obama, the sources say.
This is why U.S. President Donald Trump retweeted this famous image on November 27th with the label, “Now that Russia collusion is a proven lie, when do the trials for treason begin?”
The answer to that question, Pentagon sources say is that, Pentagon sources say, is that “Mass arrests may occur after the Bush funeral as Gitmo is over staffed and Trump may initiate military tribunals before the new Congress is seated on January 3rd 2019.“
The official announcement of the Bush Senior death is important because, unlike other members of his group such as Hillary Clinton or Bush Jr., Bush Senior had a lot of influence and respect at the top of the US Military Industrial Complex.
With him gone they have lost their last line of protection.
Also, as far as the eulogy is concerned, readers can find out for themselves his involvement in such heinous things as the assassination of Kennedy, I will mention only parts of the original intelligence where I derived from my sources of information about this man.
The first from MI6 was when, in Maine fishing in July 2007 with Russian President Vladimir Putin, Bush proposed to start a new cold war with Russia pretending to be China’s ally. Using this cold war to transform the G7, Russia and Japan that would increase their military budgets until all together could attack China and divide it into six countries. Certainly, until recently that was the plot followed by all the fake Anti-Russian hysteria in the corporate media.
In addition, the P2 Mason’s told me in 2009 that Bush was the head of the faction that wanted to kill 90% of humanity (the so-called useless eaters) and enslave the rest to create an ecological Nazi paradise.
Meanwhile my X-file sources tell me that Bush’s clone number 34 actually died. As proof he provided me with a link to “a video showing old Bush joking while presumably eating sushi and dying just as his wife Barbara finished it with a poisoned cloth. It was January 8 1992.
It was quickly replaced by a new one clone who was already waiting in the back room – a quick change of clones doubles – this was prepared in advance.“
I have asked contacts within the Japanese public broadcaster NHK to get a copy of the original tape of this incident but apparently it is kept locked up.


As a final comment, when I spoke to Bush Senior for an interview, I was told that he was retired and did not release interviews because “he knew he was supported” on what I was trying to investigate.
In other words, he seems to have changed his mind about genocide and accepted the alternative plan of a huge campaign to repair the planet followed by human expansion into the universe.
This brings us back to the peaceful ambitions of the P2 Lodge mentioned above that “will guide us into the new era with a new Yalta already in place.”
Yalta, we might recall, the 1945 conference between Winston Churchill, Franklin Roosevelt and Joseph Stalin, where it was decided the shape of the post-war world.
The new Yalta, according to the P2, it is an agreement to fund a hundred trillion dollar project to “build a huge spaceship to ferry us to other planets as part of a project that has already been developed by NASA.“
Of course, US intelligence defense agency sources have previously said that NASA stands for “Not A Space Agency” so these claims must be taken with extreme skepticism.
The other thing that the P2 had to say is that “the world financial system has been able to create financial debts of one point four billion dollars against world GDP of less than 100 trillion dollars.
This is a monster that no Central Bank algorithm can control; they know it well – both the FRB and the ECB, but also the Chinese.
This is the result of “a devastating financial war between Asia and the West which leads to the continued creation of new money in a way that is designed only to detonate the financial system.“
As a peace offer, P2 offers this bond backed by 46,000 tons of gold. 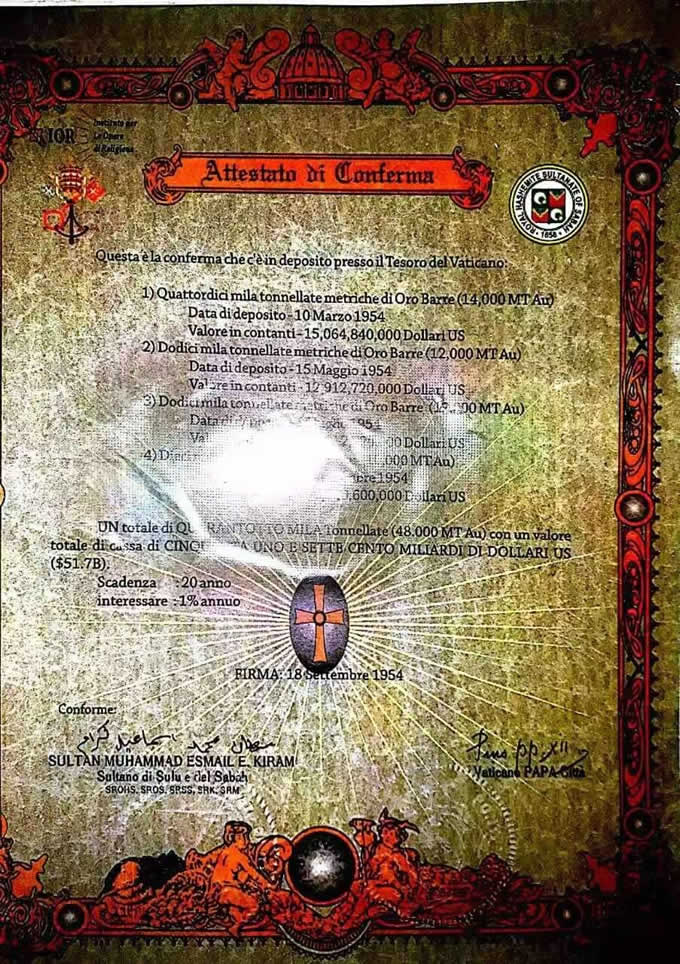 Despite this peace offer, the fact is that P2 and their secret societies have been extremely incompetent in governing this planet and have presided over human misery, endless war and the destruction of much of the natural world.
That is why instead of accepting their triumvirate we must continue to fight them until there is total and unconditional surrender.
On that front an attempt by the Khazarian Cabal (or mafia) to start the Third World War was prevented last week.
“There is no miracle of Hanukkah this year after Israeli false flag against the United States Navy to be blamed on Iran was blocked” say Pentagon sources.
Presumably this has something to do with the news that the Vice Admiral Scott Stearny, who oversaw U.S. Naval Forces in the Middle East, was found dead on Saturday in an “apparent suicide.“
This incident, combined with the Mossad laser pointers that targeted him last week, means that “Trump may be ready to declassify not only the FISA but the JFK and 9/11 files to put an end to Israel and the Bush Cabal“, the sources said.
“Israel is up against the ropes because it’s aviation, its missiles, its paper dome and its Lobby are useless, as the UN General Assembly demands the return of the Golan Heights” the sources continue.
The regime changes expected both in Israel and in its client state Saudi Arabia, as the Patriots of country’s seek the help of the world to remove Benjamin Netanyahu and his pet, the so-called Mohammed bin Salman, they say. A sign of this was seen when Trump refused to meet MBS at the recently concluded G20 meeting.
In addition Israeli police have recommended to charge Netanyahu for multiple crimes, his fall is only a matter of time.
Pentagon sources say the International Court of Justice is reporting to the Argentine magistrates to “examine the war crimes allegations against MBs the EU and the UN and this could imply Israel because it hit Yemen“.
The other thug of the Khazarian Mafia ready to be removed is the French slave president of the Rothschilds Emmanuel Macron.
Mass demonstrations to unseat Macron continue to rage across France, 84% of the French support protesters. Macron regime thugs are using provocative agents to create violent incidents as an excuse to declare martial law. However French demonstrators have posted videos demonstrating that violent protesters work for the police.
“When Macron declares martial law, the French Armed Forces can line up with the yellow vests (the demonstrators) to oust this Rothschild puppet“, the Pentagon sources said.
The sources of the French opposition, for their part, claim that Macron has hired over 10,000 foreign mercenaries to protect him, and that the French Military will use this foreign incursion as a pretext to act against him.
Another Rothschild criminal puppet that will soon be removed from the Japanese Ministry of Finance is Taro Aso, Japanese right-wing sources said.
Aso has infuriated the exponents of the right promising to sell all the water resources of Japan for the benefit of his son-in-law Alexandre de Rothschild. “The punishment of Aso has already been ordered and if it is not already done it will be soon“, said a source of the extreme right near the Imperial Family.
The arrest of the president of Nissan, Carlos Ghosn, is part of the campaign to remove the French influence of the Rothschilds from that country sources said.
Trump told Japanese Prime Minister Shinzo Abe at the g20 that he “favors a strong Japan in the rebalancing of the Nissan Renault alliance” sources from the Pentagon say.
“Given that Japan’s GDP is almost double that of France and since Nissan’s market capitalization is almost double that of Renault, France will be forced to sell or reduce its shares” add the sources.
Finally, there is also a sort of esoteric battle has now taken place in Australia that involves the direct energy weapons in the style of California.
The Australian intelligence has sent us the following images of what appears to be a massive DEW attack that is starting the fires in Queensland.
The situation is heating up and we can expect it to get worse, while the battle to free humanity rages toward victory and freedom from Babylonian debt slavery and towards a New Golden Era.