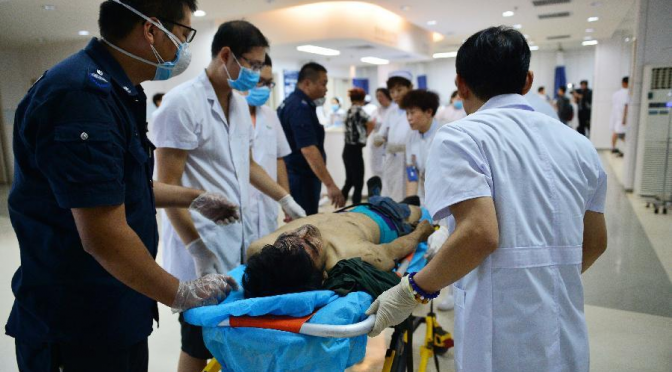 by benjamin
August 20, 2015
The recent blast in Tianjin China is linked to the ongoing cyber-war involving the financial and intelligence communities of the world. The blast produced an electromagnetic pulse that was directed at disabling the Tianhe.

http://geopolitics.co/?s=chinese+hacking
one of the world’s most powerful super-computers, according to Pentagon sources. The attack was timed to coincide with the recent devaluation of the yuan, indicating that financial warfare linked to derivatives holdings at the large Western banks was a likely motive. Clearly the attack was also linked to ongoing negotiations between East and West over the future of the global political, economic and financial infrastructure. Pope Francis is trying to place himself as a peace-maker and intermediary in this ongoing power struggle/negotiation between East and West, according to P2 freemason sources.
The real power struggle, of course, is still inside the US and, by proxy, in the Middle East, not in China. “I believe this nation is at an important inflexion point, specifically regarding national security,” retiring Army Chief of Staff Gen. Ray Odierno said on August 12th. This is code for a move against the Khazarian mafia, according to Pentagon sources.
As a part of this ongoing power struggle top US based Mossad agent Rahm Emmanuel “under pressure”, broke ranks with Benyamin Netanyahu to support the Iran nuclear deal, the sources say. “Emmanuel will probably be arrested anyway,” they added.
In Canada too, police are systematically exposing corruption inside the Stephen Harper government as Canada heads into an October 19th general election. The police investigations have dragged down the Zionist Bush slave Harper’s numbers and so his days in power may finally be about to end.
In the Middle East pressure is being ratcheted up on Turkey because of their support for ISIS and the rogue Netanyahu government in Israel. Russia has threatened to cancel their planned Turk stream pipeline as a part of this pressure. The US military, meanwhile have neutralized Turkey’s patriot missile defenses and told the Turkish military brass they either had to stop supporting ISIS or else be kicked out of Nato. China is being asked to not provide Turkey with substitute air defenses, the sources say. Turkish President Tayyip Erdogan’s son Bilal ships ISIS oil while his daughter Sumeyye runs a hospital that treats ISIS fighters, the Pentagon sources say. For this reason “they are high value targets,” the sources say.
They are not the only “high value targets,” out there, multiple sources agree. If we all push, especially inside the military and the agencies, Khazarian mob rule can be ended for good this autumn. In fact September 11th this year might be a good date to demand that the US and Israel based perpetrators of this attack, including the Bush family and Netanyahu, be finally arrested.
This writer will now resume his holidays and will be offline and not-connected to the web. If necessary, another emergency update will appear next week in addition to the pre-written text due on Monday.
source
One of the significant sources of funds for the fascist Nazionist Jesuit Khazarian Mafia is the healthcare industry which registered a whopping $3.09 trillion in 2014, and is projected to soar to $3.57 trillion in 2017, in the US alone.
We can help take down the Dark Cabal by avoiding drugs, defeat any viral attack and scaremongering easily by knowing how to build our own comprehensive antiviral system. Find more about it here.