Such were the words of “V” echoing across the Chinese airspace on the night the world created by the Illuminati is supposed to end. 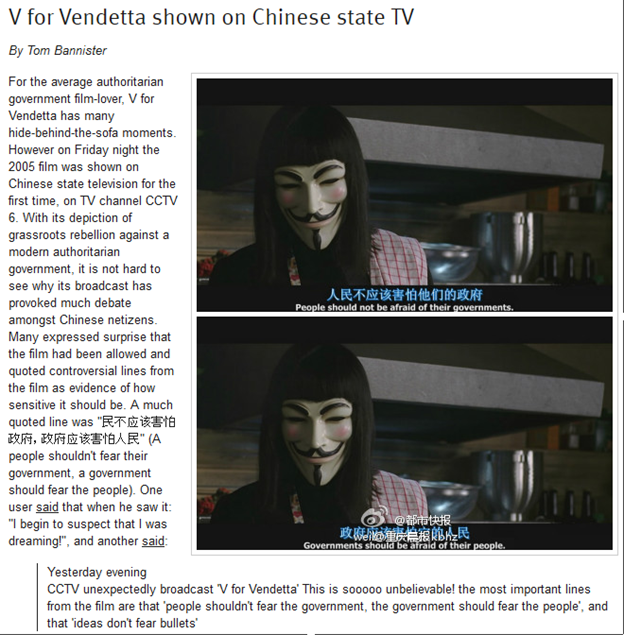 If my memory serves me correctly, this was a prohibited film before. There were too many lines in it about people demanding freedom, and people helping each other to eventually break out [from oppression]. The whole film is saturated with these themes.

Someone else said said:

CCTV has broadcast ‘V for Vendetta’. This makes netizens believe, people shouldnt fear their government, the government should fear the people! Love the V mask!

Update #1: Reader @1dayinchina points out that should viewers get inspired by the film’s revolutionary message, the masks are on sale at your local Shanghai Carrefour. 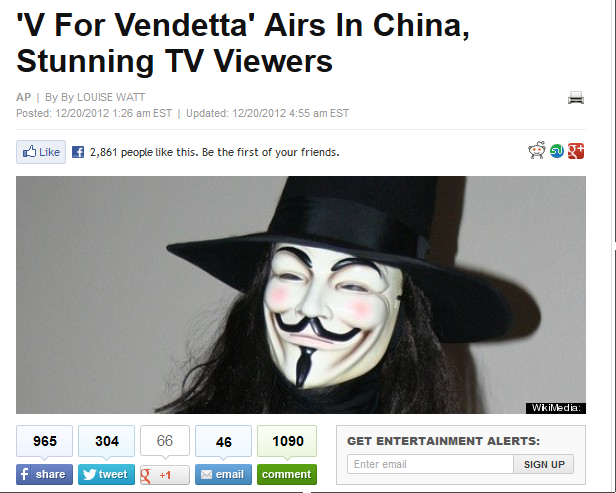 BEIJING (AP) — Television audiences across China watched an anarchist antihero rebel against a totalitarian government and persuade the people to rule themselves. Soon the Internet was crackling with quotes of “V for Vendetta’s” famous line: “People should not be afraid of their governments. Governments should be afraid of their people.”

The airing of the movie Friday night on China Central Television stunned viewers and raised hopes that China is loosening censorship. 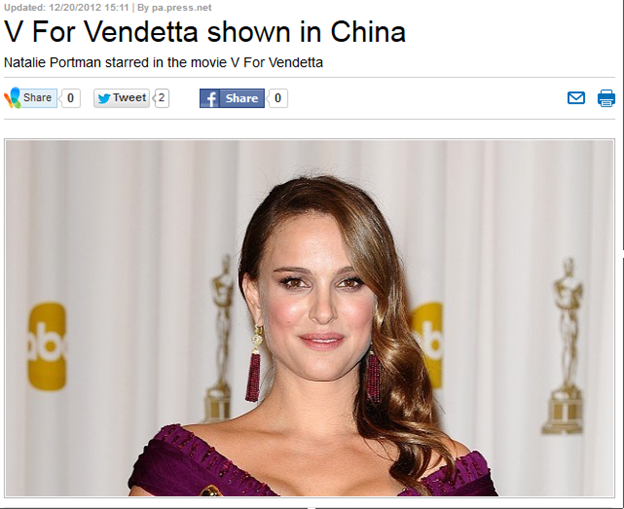 V For Vendetta has been broadcast in China – despite the plot revolving around a totalitarian government.

The film, which didn’t air on the big-screen when it was released, was shown on TV, raising hopes that the country is loosening censorship.

Television audiences across China watched an anarchist anti-hero rebel against a totalitarian government and persuade the people to rule themselves.

The 2005 movie, based on a comic book, is set in an imagined future Britain with a fascist government. The protagonist wears a mask of Guy Fawkes, the 17th-century rebel who tried to blow up Parliament.

The mask has become a revolutionary symbol for young protesters in mostly Western countries, and it also has a cult-like status in China as pirated DVDs are widely available. Some people have used the image of the mask as their profile pictures on Chinese social media sites.

Beijing-based rights activist Hu Jia wrote on Twitter, which is not accessible to most Chinese because of government Internet controls: “This great film couldn’t be any more appropriate for our current situation. 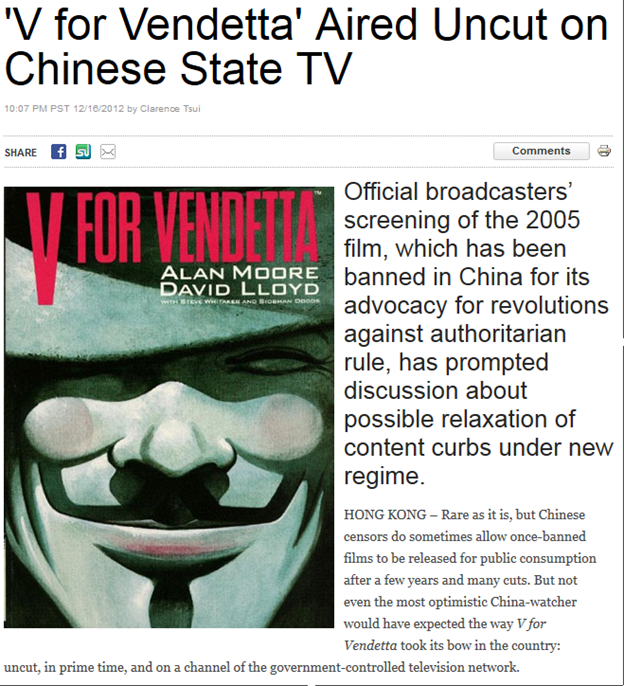 The sight of the film’s titular anarchist delivering a televised speech about “censors and systems of surveillance coercing your conformity and soliciting your submission” on CCTV-6, China Central Television’s movie channel – has set the Chinese blogosphere ablaze, with contributors expressing awe watching the film on official television and speculating whether this points to a more varied and less restricted media landscape.

The appearance of V for Vendetta on state television is just the latest of a string of released films with content which could easily bring discomfort to the Chinese ruling authorities. The Hong Kong film Cold War, which has secured 230 million yuan (US$ 37 million) in the mainland Chinese box office during its November run, revolves around the struggle between two assistant police commissioners aiming for the top job – a scenario which coincidentally mirrors the real-life factional fracas threatening the power-succession of the Chinese Communist Party last month.

V for Vendetta was screened, with its lines dubbed into Chinese, on CCTV-6 at 10:07 p.m. on Friday, with the channel’s official Weibo account running a message offering a synopsis of the film so that “film buffs could have some fun”. This post – which both acknowledges the existence of the film and points to a rough sketch of the story – was itself a breakthrough, as information of the film has been kept off officially-sanctioned internet search portals such as Douban or Baidu.

This is another Ben Fulford Updates confirmation re his article indicating that the new Chinese leadership is all for reforms.

“The Chinese leadership transition is also still underway but the emerging consensus is that democratic and other reforms that the new generation carry out will resemble the Singapore model more than they resemble the US or European models.” more

Recently, a rumor of a coup in China is circulating around a microblog called Weibo…

Which roughly translates to Google’s…

Here’s what’s in the papers yesterday… 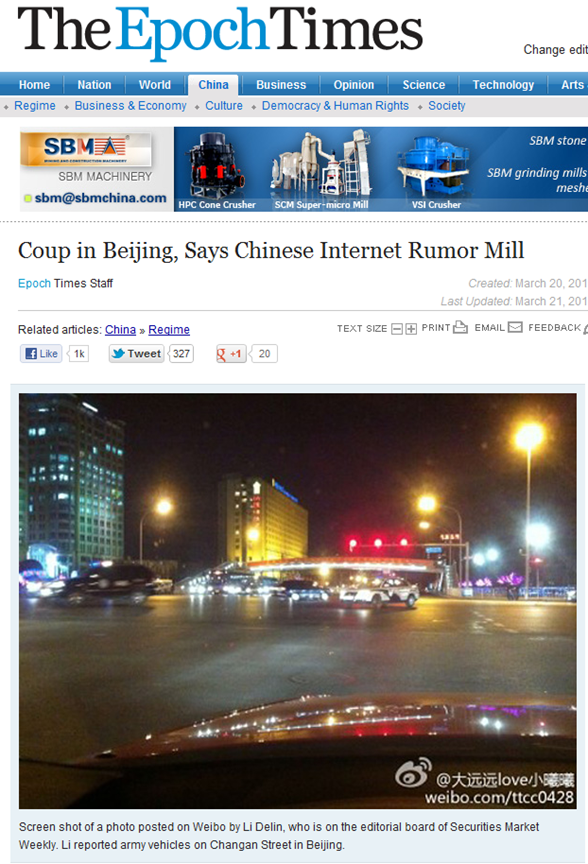 “Over the night of March 19 and early morning of March 20, Bejing local time, a message about a large number of military police showing up in Beijing spread widely across microblogs in mainland China.” more 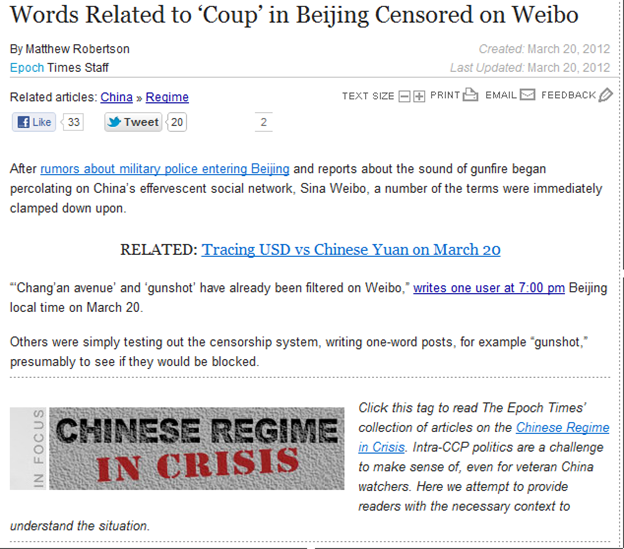 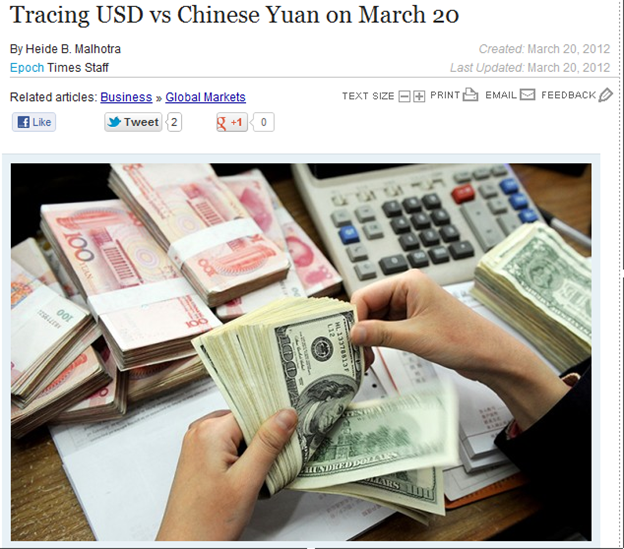 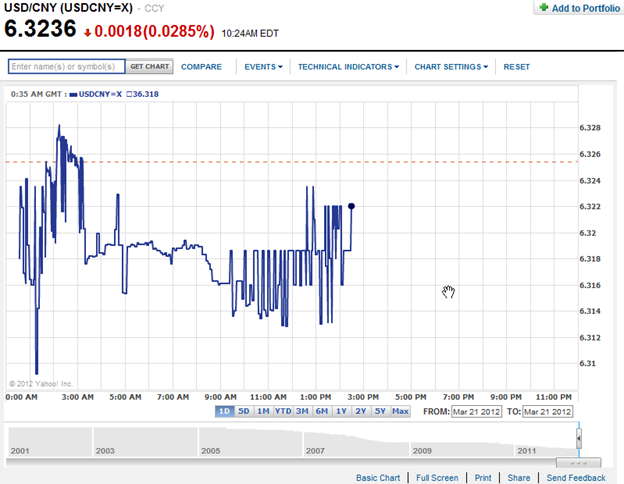 Early this week, a certain Bo Xilai was ousted from office… 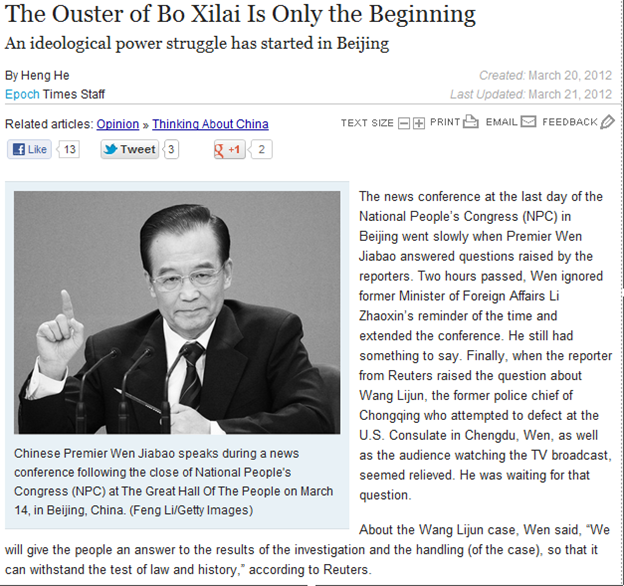 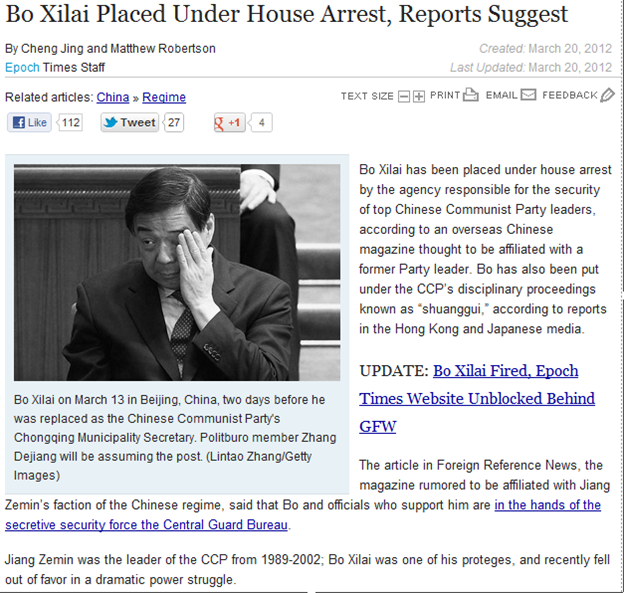 Is this rumored coup part of the action taken by the White Dragon Society to pave the way for the implementation of Global Settlements and worldwide development packages?

While we don’t know exactly what these events really are, we have to remember that China together with Japan is at the forefront of the move to implement Global Settlements by way of knocking down the counterfeit financial structure of the Dark Cabal. Is the rumored coup a confirmation of the WDS plans to rid China of the Dark Cabalists? Or, is it otherwise, i.e. the cabalists are gaining the upper hand?

Perhaps, the articles below will shed more light to the issue… 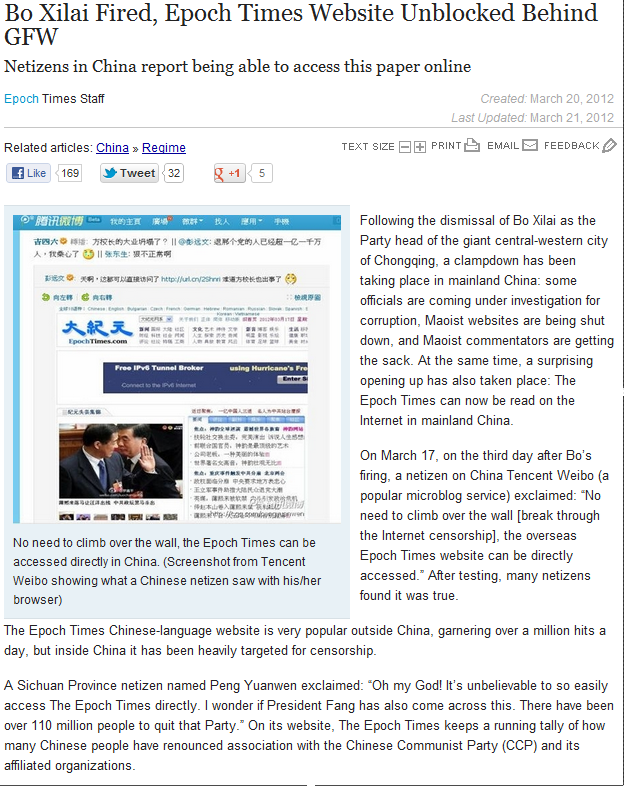 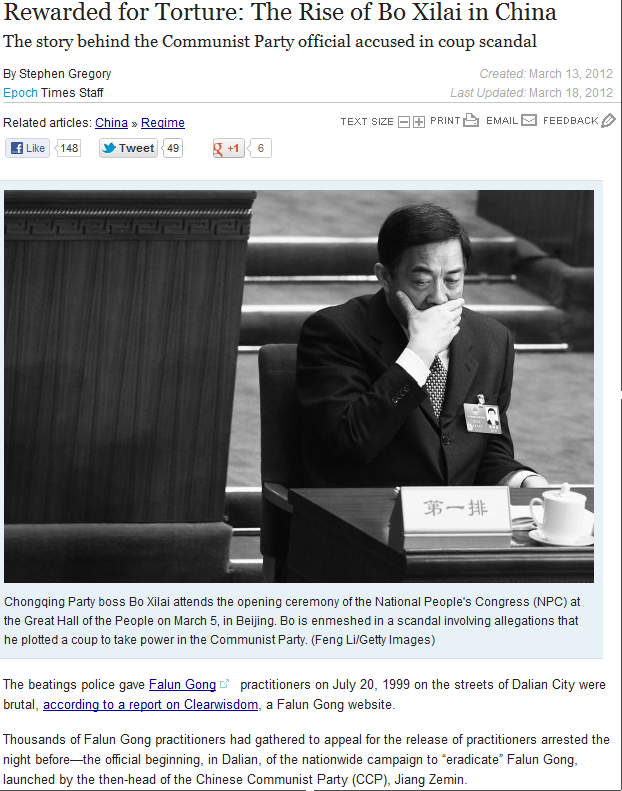 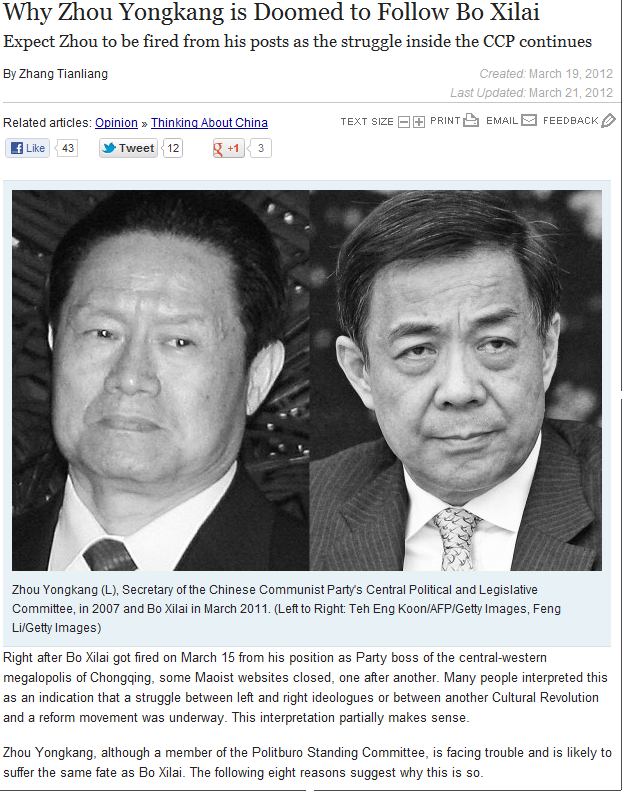 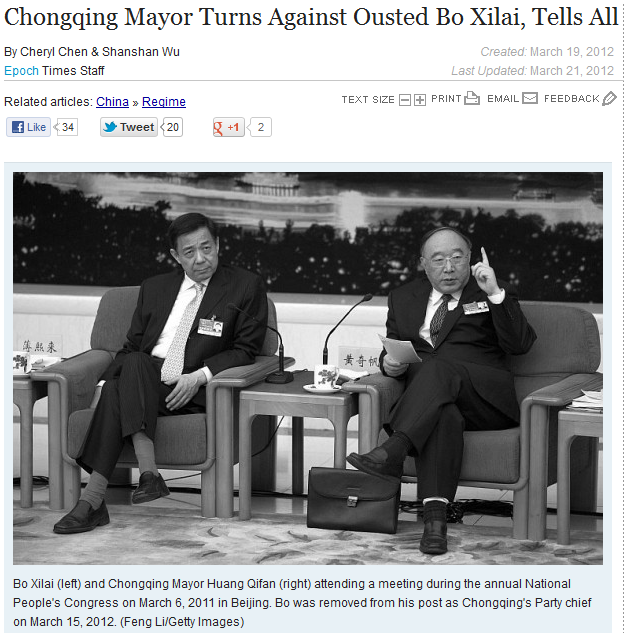