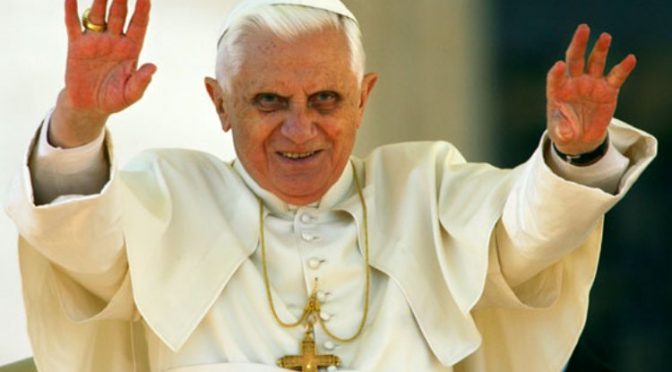 Here’s an explosive update from the International Tribunal into Crimes of Church and State [ITCCS]:

A Global Media Advisory from the International Tribunal into Crimes of Church and State (ITCCS) and its Central Directorate, Brussels

“I saw Joseph Ratzinger murder a little girl”:
Eyewitness to a 1987 ritual sacrifice confirms account of Toos Nijenhuis of Holland

A Breaking News Summary and Update from ITCCS Central, Brussels

The criminal prosecution of yet another Pope came closer to reality this month as Italian politicians agreed to work with the ITCCS in a common law court action against the papacy for its haboring of a wanted fugitive from justice: deposed Pope Benedict, Joseph Ratzinger.

The agreement came after a new eyewitness confirmed the involvement of Ratzinger in a ritual child sacrifice in Holland in August of 1987.

“I saw Joseph Ratzinger murder a little girl at a French chateau in the fall of 1987″ stated the witness, who was a regular participant in the cult ritual torture and killing of children.

“It was ugly and horrible, and it didn’t happen just once. Ratzinger often took part. He and (Dutch Catholic Cardinal) Alfrink and (Bilderberger founder) Prince Bernhard were some of the more prominent men who took part.”

This new witness confirms the account of Toos Nijenhuis, a Dutch woman who went public on May 8 with her eyewitness account of similar crimes involving Ratzinger, Alfrink and Bernhard. (see: http://youtu.be/-A1o1Egi20c)

Soon after his historic resignation from office last February 11, Joseph Ratzinger was convicted of Crimes against Humanity on February 25, 2013 by the Brussels-based International Common Law Court of Justice, and a global citizens arrest warrant was issued against him. Since then, he has evaded arrest within Vatican City under a decree of the present Pope Francis.

The surfacing of this new evidence of Vatican complicity in child murder has prompted a group of Italian politicians to agree to work with the ITCCS in confronting the papacy with a common law court case against the present Pope Francis, Jorge Bergoglio, for his sheltering of Ratzinger and his own complicity in war crimes. The politicians had been in closed negotiations with ITCCS representatives since September 22.

“We are looking at revising if not abolishing our country’s Lateran Treaty with the Vatican, whose actions in harboring child rapists certainly meet the definition of a Transnational Criminal Organization under international law” stated a spokesman for one of the politicians.

In response, during the same week of October 7 when these new allegations surfaced, the Vatican commenced a series of attacks against ITCCS groups in Europe involved in documenting the church’s involvement in cult ritual murder.

Paid operatives sabotaged ITCCS work in Holland and Ireland during that week, and on October 14, the main ITCCS website was destroyed by the same saboteurs.

Political sources in Rome have revealed that these attacks were paid for and coordinated through the Office of the Vatican espionage agency known as the “Holy Alliance” or The Entity, and its affiliated “dirty ops” bureau, the Sodalitium Pianum, established in Rome in 1913. They also involved the agents of the Papal Nuncio to Holland, Archbishop Andre Dupuy, who made direct contact with two of the saboteurs, “Mel and Richard Ve”, and with the Archbishop of Dublin, Diarmuid Martin, who likewise paid bribes to disrupt ITCCS work in Ireland.

“The political tide has shifted against the church, and it’s no longer possible for child killers in robes to hide behind the Lateran Treaty. And in its death throes, the church hierarchy is using its usual methods of lies and misinformation to shift the focus off its own criminal guilt.”

In response to this breakthrough and to the renewed attacks on its work, the ITCCS Central Directorate in Brussels has today made the following announcement to the world media and to its affiliates in twenty six countries:

1. During November, our network will convene a global press conference in Rome with Italian politicians to announce a new phase of our campaign to disestablish the secular power of the Vatican. This campaign will include the launching of a new common law court action against the present Pope Francis and his agents for complicity in Crimes against Humanity and cult ritual murder.

2. To safeguard these efforts, our main website at www.itccs.org has been restored and protected with new security features. In addition, henceforth, all ITCCS sections will operate under an official Charter which all members must sign and swear to. A copy of this Charter will be posted at itccs.org and circulated to all our sections.

3. For information purposes, our former television site at www.itccs.tv has been compromised and seized by the paid operatives known by the aliases “Mel and Richard Ve”, who are acting in deliberate opposition to the ITCCS to blacken our work and the good name of Kevin Annett, our Field Secretary. Neither “Mel and Richard Ve” nor the itccs.tv site are affiliated with nor in any way represent the ITCCS.

4. Jorge Bergoglio (alias Pope Francis) and other officials of the Vatican are now under criminal investigation for heinous offences involving the trafficking, torture and killing of children. We advise all persons to refrain from assisting Bergoglio and his agents under pain of summary conviction for participating in a proven criminal conspiracy emanating from the Curia and the Office of the Roman Pontiff.

This Statement has been issued on October 28, 2013 by the Central Directorate of the International Tribunal into Crimes of Church and State in Brussels, Belgium.