If the dominant media was serious about holding the Canadian government to account for its foreign policy decisions, there would be numerous stories pointing out the hypocrisy of Ottawa’s response to recent political developments in Haiti and Venezuela. END_OF_DOCUMENT_TOKEN_TO_BE_REPLACED

A key witness to the Clinton high crime against the Haitian population was suicided, mere days before taking the witness stand. His death is just another line to the long list of Clinton murders involving adversaries and close associates. END_OF_DOCUMENT_TOKEN_TO_BE_REPLACED

Haiti gained so much attention when it was hit by a massive earthquake in 2010, but it wasn’t just a natural disaster.
The action of the US military to control inbound flights including those carrying disaster relief materials and personnel raised some hard questions.
END_OF_DOCUMENT_TOKEN_TO_BE_REPLACED

Those who have studied the inner workings of the mind have discovered ways and means on how to exploit its weakness. We all possess a sense of compassion, so that when we have the means to help someone in need we don’t hesitate to do so.
END_OF_DOCUMENT_TOKEN_TO_BE_REPLACED

The information spreading then was that it was deliberate and the goal was to plunder gold bullion from its central bank by occupation forces. Even the Red Cross personnel and equipment were not able to land on time for humanitarian purposes due to strict security at the airports.

“After the colossal disaster of the January 12, 2010, earthquake in which estimates of over 200,000 Haitians lost their lives, the government of Haiti, instead of setting forth plans to give some modicum of dignity to its people now living in tent cities throughout the land, has decided to act like the restaveks (indentured servants) to Western Corporatists and Haiti’s traditional parasitic “commercial elite” by facilitating wholesale sell offs of Haitian assets and natural resources such as oil, gold, and farmland….The speculations about the natural resources …need to cease. The current Prime Minister of Haiti, Jean Max Bellerive has already admitted publicly that not only is there oil, gold, most likely iridium in Haiti, but that contracts with certain “undisclosed entities” have already been made for exploitation of such natural resources.”

– Haiti for Sale by Pascal Robert for The Huffington Post, May 4, 2010

“The US military’s takeover of emergency operations in Haiti has triggered a diplomatic row with countries and aid agencies furious at having flights redirected.

Brazil and France lodged an official ­protest with Washington after US military aircraft were given priority at Port-au-Prince’s congested airport, forcing many non-US flights to divert to the Dominican Republic.

Brasilia warned it would not ­relinquish command of UN forces in Haiti, and Paris complained the airport had become a US “annexe”, exposing a brewing power struggle amid the global relief effort. The Red Cross and Médecins Sans Frontières also complained about diverted flights.

The row prompted Haiti’s president, René Préval, to call for calm. “This is an extremely difficult situation,” he told AP. “We must keep our cool to co-ordinate and not throw accusations at each other.”

The squabbling came amid signs that aid was reaching some of the hundreds of thousands of people in desperate need of water, food and medicine six days after a magnitude 7 earthquake levelled the capital, killing more than 100,000, according to Haitian authorities.”

– US accused of annexing airport as squabbling hinders aid effort in Haiti, The Guardian

Now, the Haitians are having another problem —  cholera epidemic, and they are suing the United Nations for deliberately introducing the outbreak into their country which have known not about the disease for the last 100 years. This is on top of the AIDS that was introduced into the country much earlier.

Today, putting a country into submission has never been that easy. Manufacturing disasters either by artificial scientific means or just leaving your shit behind, will always do the work. 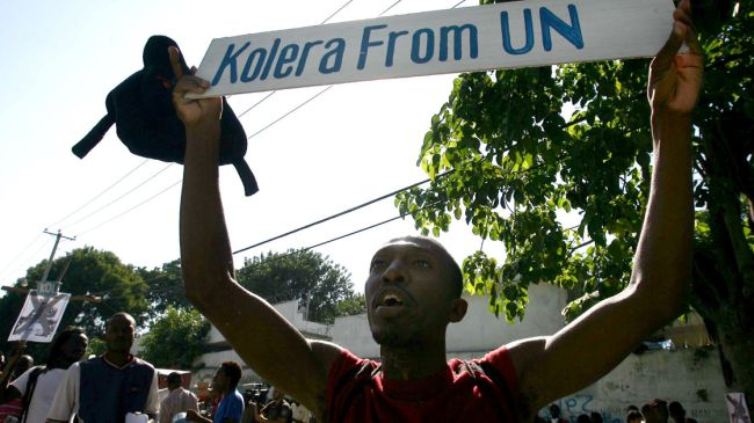 Lawyers representing victims of a cholera epidemic in Haiti have filed a multi-billion dollar compensation claim against the United Nations.

The lawsuit, which was filed on Wednesday in a New York federal court, blames UN peacekeepers for inadvertently introducing the disease into Haiti in late 2010, Reuters reported.

The disease killed more than 8,300 people and sickened more than 650,000 since October 2010. That’s almost seven percent of the population.

“Haiti today has the worst cholera epidemic in the world,” said Miami attorney Ira Kurzban, who announced the lawsuit at a joint news conference with the human rights groups Bureau des Avocats Internationaux (BAI) and the Institute for Justice and Democracy in Haiti (IJDH).
“Before these events, Haiti did not know of cholera for 100 years. Cholera was brought to Haiti by UN troops [from Nepal],” Kurzban said.

The troops were stationed near a tributary of the Artibonite River and discharged raw sewage that carried a strain of cholera into Haiti, sparking the epidemic, the lawsuit said.

“The UN knew or should have known that its reckless sanitation and waste disposal practices posed a high risk of harm to the population, and that it consciously disregarded that risk, triggering an explosive epidemic,” the civil rights groups said in the joint press release.

The lawyers are demanding $2.2 billion for the Haitian government to eradicate cholera along with unspecified damages for as many as 679,000 victims for personal injury, wrongful death, emotional distress, and loss of use of property and natural resources.

In February, the United Nations said it would not pay hundreds of millions of dollars in compensation claimed by cholera victims in Haiti, claiming that it is immune from lawsuits arising out of damage done in the course of its activities.

The UN peacekeeping troops were deployed to Haiti in the aftermath of the devastating 2010 earthquake there, which resulted in more than 220,000 deaths.

Cholera is an acute intestinal infection that causes severe diarrhea and can lead to dehydration and death. It occurs in places with poor sanitation.