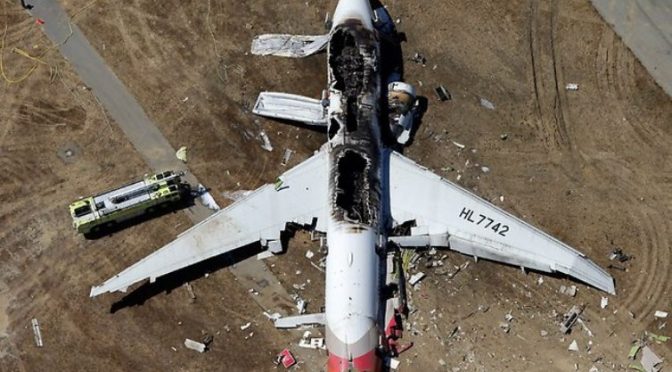 The Snowden Revelations is, at the very least, akin to the biggest scandal hitting the banking sector, i.e. Libor interest rigging, and yet the mainstream consciousness is deaf and blind.

It never cared when a president’s plane was forced to land to on airport that was not its designated destination. Nor it paid any attention about a plane crash that was beyond ordinary.

Those who have followed the chessgame from the very beginning know that the final pieces have been drawn, and it is clear that one has the advantage and the other is deadly desperate. 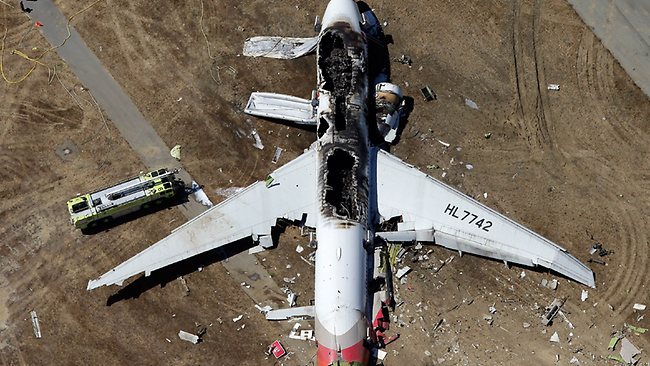 Why is no one talking about the plane crash?

There are too many anomalies surrounding the San Francisco crash of the 777 from Hong Kong. First of all, that plane would have been the most likely one to have been carrying Snowden if it was supposed to have instead been en route to Mexico City before refueling and continuing it’s flight. Whether or not they were is irrelevant from the perspective of an electronic hijacking, with the precedent of what happened with the Bolivian President’s plane already. Taking hostile action against aircraft that “could” have Snowden aboard is going to be the status quo, and any crashes or disasters that were unwarranted will be written off as collateral damage. Let’s look at the anomalies surrounding this crash.

1. There was absolutely nothing wrong with the airplane, and it appeared to be making a perfectly controlled approach that was way too low, and then suddenly just crashed.

2. The airport did not respond with emergency personnel. Instead, the Army responded to the crash, and as a result it took them over a half hour to arrive at the scene and do anything at all. People who were on the plane were blown away by the complete lack of any emergency response from the airport, which when it finally arrived happened AFTER everyone was off the plane and had walked away from the scene and done other things, such as aid people who had fallen out of the broken section and were laying injured out in the open. When the aircraft was on fire, it was AFTER everyone got their carry ons off the plane, and basically exited at their own pace. Flight attendants were throwing peanuts to the passengers in droves as they exited the plane. None of this made it into the mainstream press. Crazy stuff.

3. The FBI was there but offered no assistance to the injured passengers. Instead, the injured were quarantined at the airport until the FBI fully debriefed every single one of them. Why would the FBI not give a damn about the injured and debrief them immediately rather than in the hospital afterward, and why would the FBI even need to debrief anyone at all? This only happens when there is a huge government action going on, and they need to issue threats or payoffs to keep people’s mouths shut.

4. The flight recorders were promply confiscated and flown to Washington DC, before anyone from Hong Kong, the people who owned the plane, had a chance to check anything. Though the FAA could be expected to take the flight recorders into their posession, I am sure we are, as a result of them being taken by the most lying government in world history, going to get an accurate answer for what they really recorded. Cool.

5. There were no weather anomalies AT ALL that could have caused the crash. The automated warning which is supposed to tell the pilots to pull up when an approach is bad happened three seconds before the plane hit the ground. This is impossible, for the last 40 years or so these warning systems have been in all commercial aircraft and they work great. Pilots typically get at least a 45 second warning if an approach is not going right, why did this aircraft give the warning only 3 seconds before impact? I think I have an answer. If the plane was remote hijacked it is entirely possible that the warning to pull up was instead given to the remote hijacker, and when he figured he could not recover the approach he returned control to the pilots . . . . . too late. Witnesses on the ground said the plane went to full throttle immediately before impact.

The media was quick to blame the pilots as being inexperienced and “in training” but I’d like to pop the big question – how does being in “training” cause an automated system to give an approach warning WAY TOO LATE? The ILS system at the airport which assists pilots during foggy weather while they are making blind approaches was offline for maintenance, but with the weather being perfect it was not needed at all. The approach warning that failed is just part of the airplane, which operates completely independent of any system on the ground and observes it’s environment and calculates where and how the plane is going to touch down based on sensor inputs. Even 1970’s vintage soviet Migs had systems of this type which functioned perfectly, and I find the failure of this system in a state of the art high class American plane to be highly suspicious. It had to have been disabled and that could have easily happened if the plane was remotely hijacked.

The departure airport location, the failure of the arrival airport emergency response, the presence of the army, the debriefing by the FBI, the failure of the aircraft’s own approach warning system, and the immediate confiscation of the flight recorders add up to what I think is the greatest probability – that aircraft was not supposed to land in San Francisco AT ALL, it was probably supposed to land in Mexico City, got remote hijacked because they thought it might have Snowden en route to Venezuela, was flown by a desk bound idiot who could run Microsoft flight simulator really well, and crashed. The supporting stories about the passengers are all B.S., if they were true why would the FBI have to debrief everyone?

Fat chance we will get the truth in all of this from the scamming ziopress, perhaps I am wrong with this assessment but seriously, as far as what is “official” goes, things really don’t add up.

This article was first published on jimstonefreelance.com.