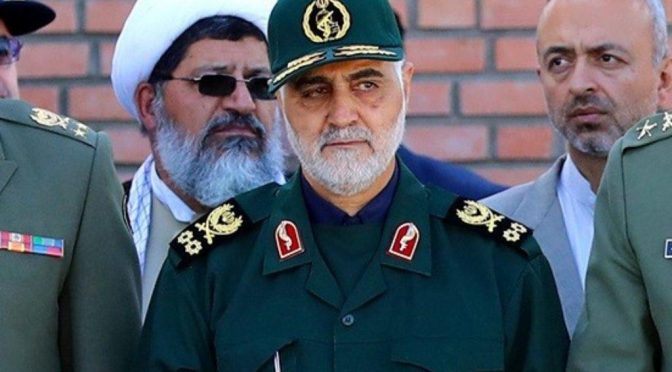 Donald Trump just crossed the red line when he ordered the assassination of the most respected commander of the Iranian Quds Force, Major General Qassem Soleimani. This action will put all US forces at risk of retaliation from Iranian sympathizers across the Middle East and beyond.

Major General Qassem Soleimani, the commander of the Quds Force of Iran’s Islamic Revolution Guards Corps (IRGC), and Abu Mahdi al-Muhandis, the second-in-command of Iraq’s Popular Mobilization Units (PMU), have been killed in US airstrikes in the Iraqi capital Baghdad.

The IRGC announced in a statement on Friday morning that Major General Soleimani and al-Muhandis were martyred in the attack carried out by US helicopters.

“The deputy head of the Hashed, Abu Mahdi al-Muhandis, and head of the Quds Force, Qasem Soleimani, were killed in a US strike that targeted their car on the Baghdad International Airport road,” it said in a statement on Friday.

“The American and Israeli enemy is responsible for killing the mujahideen Abu Mahdi al-Muhandis and Qassem Soleimani,” said Ahmed al-Assadi, a PMU spokesman.

The group had earlier said that its public relations director Mohammed Reza al-Jaberi and four other members of the group were also killed after three Katyusha rockets struck a military base next to Baghdad International Airport in the Iraqi capital.

The media bureau of the voluntary forces – better known by the Arabic word Hashd al-Shabai – described the early Friday morning attack as a  “cowardly US bombing”.

Shortly after the attack, US officials, speaking on condition of anonymity, told Reuters that the strikes were carried out against two targets linked to Iran in Baghdad. The officials declined to give any further details.

Meanwhile, security sources, speaking on condition of anonymity, told AFP that eight people were killed in the attack.

The development came as the United States military said on Sunday it had carried out strikes in western Iraq against Kataib Hezbollah group, which is part of the pro-government Popular Mobilization Units – better known by the Arabic word Hashd al-Sha’abi.

Senior Iraqi officials also condemned the US attack against the Kataib Hezbollah’s positions as a “violation of Iraqi sovereignty”.

Caretaker Iraqi Prime Minister Adel Abdul Mahdi called the move a “dangerous escalation that threatens the security of Iraq and the region” in a statement on Sunday,

Abdul Mahdi said US Secretary of Defense Mark Esper had called him about half an hour before the US raids to tell him of the US intentions to hit Kataib Hezbollah’s bases. He said he asked Esper to call off US plans.

The US raids drew a wave of condemnation from officials and movements across the region, and triggered furious public protests outside the US embassy in Baghdad.

The Pentagon said the bombings were in response to attacks targeting American forces near the oil-rich northern Iraqi city of Kirkuk last week, which reportedly killed a US civilian contractor and injured four US service members, as well as two members of the Iraqi security forces. The US accused Kataib Hezbollah group of the attack.

Therefore, it is wrong for the White House to justify the assassination of Soleimani as a retaliation of the angry protestors outside of the US Embassy in Baghdad.

The Americans started the whole thing somewhere else.

Israel is an expert in starting a war by killing somebody that would provide a pretext for a US intervention. Trump only needs a slight push in favor of Israel, especially when it comes to Iran.

Even more devastating for the Trump administration is the leaked information that it was a diplomatic ambush from the very beginning.

No magic intercepts were needed, we now learn from Iraq, to arrange for the assassination of Soleimani.  We now learn that the ambush was staged through diplomatic channels, drawing Soleimani to Iraq in order to receive an offer of reduced sanctions from President Trump.

General Qassem Soleimani landed in Iraq to meet with PM Adel Mahdi, who was to be given a message for Iran by President Trump.  He was murdered instead, the diplomatic note from Secretary of State Michael Pompeo to the Iranian envoy, Soleimani, was, in fact, an invitation to an ambush.

Soleimani flew from Damascus and was killed as he left the diplomatic check-in at the Baghdad International Airport.

Iraq had been acting as intermediary between Tehran and Washington with General Soleimani acting as diplomatic representative of Iran.

Soleimani had been asked by the Iraqi government to organize and train the forces that defeated ISIS, a process that was continuing as it had been continuing in Syria in partnership with Russia and Turkey, as part of the Astana Coalition.

The actual assassination was successfully conducted with the real-time coordinates supplied by the Israelis.

Starting another war in the Middle East – is this Trump’s way out of the ongoing impeachment lodged against him?

We all know that Bibi Netanyahu was using the same tactic in order to survive an election, and the corruption charges filed against him and his wife. Is Trump following Netanyahu’s footstep, without thinking about the thousands of consequences for such an unprovoked action?

Or is this really the plan from the very beginning?… to create the need for the military industrial complex to come in, and shore up the price of “defense” related stocks in the market, where Trump himself has huge investments in?

The gamechanging entry of the Iranian Quds Brigade under the command of Major General Qassem Soleimani into the Syrian theater of war against ISIS invasion of Syria is one of his most stellar accomplishments against Israel and the CIA.

“You are witnessing what they [the Americans] are doing in Iraq and Syria. They are taking revenge on Hashd al-Sha’abi because it paralyzed and [eventually] eliminated Daesh, which they [the Americans] had created and nurtured,” the Leader said at a meeting on Wednesday…

Ayatollah Khamenei also commented on the violent riots that hit several Iranian cities in mid-November on the back of a series of popular protests over a government decision to increase fuel prices.

The Leader said the people had some demands, but that the enemy quickly intervened to take advantage of those demands and commit acts of vandalism.

The people’s vigilance came to light when they broke ranks with the rioters, who were trying to hide behind ordinary protesters.

“The main culprits of the mid-November riots and the attacks on infrastructure such as gasoline storage sites, wheat warehouses and public property were linked to foreign intelligence agencies,” Ayatollah Khamenei said.

On the first day of the riots, the Leader added, the Americans jumped for joy, but they became disappointed shortly afterwards as the riots came to end and they failed to achieve what they wanted.

The Iraqis and their government have since been working with the Iranians after realizing that they were just pawns in the “war of terror”, which only benefits Israel and petrodollar countries in the Middle East.

This Iran-Iraq security cooperation is part of a larger coordinated action against the Western Criminal Cabal that has been fomenting endless wars wherever energy and other rare natural resources are present.

Just a few days ago, a combined naval exercise was held between Iran, China and Russia near Iranian waters, in order to send a message that both Russia and China will not stand idly by while the US is demonizing and sanctioning Iran without cause.

Despite of this warning, the Soleimani assassination is nothing short of a US declaration of war against Iran, and it has Trump’s signature in it.

Is the US prepared for another round of Eastern Alliance multipronged offensives?

Others have understood this Trump tweet to be a conciliatory one, but we consider it in reference to the Nuclear Treaty struck during Obama’s tenure where about $70 billion Iranian money, sequestered during a decade of sanctions, was returned to the Iranians as part of the deal to stop its nuclear program.

Whatever the immediate gameplay is, it has been known that the Jesuit/Rothschild faction of the Criminal Cabal will never surrender Apartheid Israel to anyone. These people are obsessed with fulfilling the scenario described in their own scriptures that created the idea for a Greater Israel.

For such a grand plan to become a reality, the US Armed Forces will be at the frontlines, and just like in Nazi Germany, the Germans “knew nothing about what’s going on, while their armed goons were just following Fuhrer Hitler’s orders.”

Either way, they are all guilty by way of commission, i.e. killing the wrong enemies, and omission, i.e. by not doing anything to eliminate the Deep State scourge within their own government.