Sources in the BIS and CIA confirm the Bilderberger meeting held starting June 9th in St. Moritz, Switzerland was cancelled halfway through because prominent participants, including Henry (Heinz) Kissinger faced imminent arrest. Following this, two prominent Bilderbergers, Joseph Ackermann CEO of Deutschebank and Queen Beatrix of the Netherlands, contacted the White Dragon Society and offered to cooperate in setting up the new financial system. A negotiator for the Chinese communist government also expressed support for the new financial system at a meeting last week in China with a White Dragon Representative. However, a lot of technical work remains to be completed so it is hard to give a precise date for the changes. There is also a strong possibility the new financial system will be introduced quietly and gradually with no major public announcements. 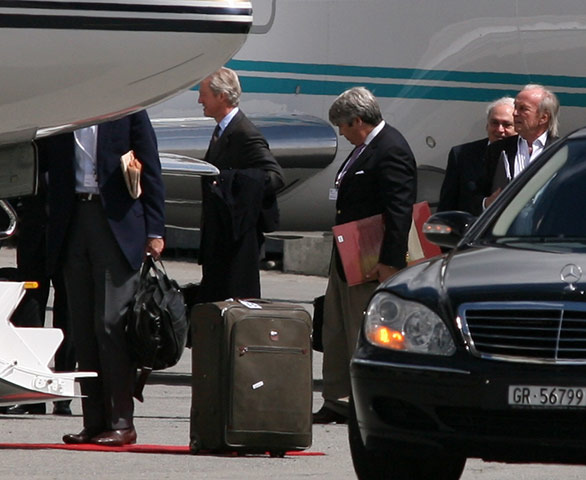 The collapse of the Bilderberger meeting in St. Mortitz came about because the Swiss government ordered the meeting to be opened to journalists and the public, according to the CIA and BIS sources.

In addition, many participants decided to flee the country before Monday, January the 13th, when Swiss judicial officials, plotting Knights Templar revenge, were planning to arrest many of the Bilderbergers, the sources say. As a result of this fiasco, David Rockefeller, George Soros and their fellow Khazarian Satanists are now more isolated than at any time in modern history.

Following this fiasco, Prime Minister Benjamin Netanyahu of Israel personally called Japanese Prime Minister Naoto Kan and said Israeli linked companies controlled the security at most Japanese nuclear plants and threatened a nuclear holocaust unless the codes to the financial system were handed over to the Khazarians, according to a Japanese military intelligence source. The same blackmail has also been directed at the nuclear power plants along the Mississipi river that are now being flooded. The Isrealis were told by both the Pentagon and the Russians that nuclear blackmail was not their monopoly in a clear warning to back off or else.

The meeting in China, for its part, revealed lots of new and important information. First of all, lots of new light was shed on the incident in Chiasso, Italy where two Japanese were illegally detained by Italian customs authorities and had the $134.5 billion worth of bonds they were holding stolen.

According to one of these men, Mitsuyoshi Watanabe, formerly of Merrill Lynch, he was carrying a bunch of Kennedy bonds that were supposed to be cashed in order to finance a tunnel linking South Korea and Japan.

His companion, Akihiko Yamaguchi was carrying bonds given to him by a senior Yakuza. The Yakuza said the bonds were part of a major hoard in Japan. Former US vice-president Dick Cheney recently examined the bonds, pronounced them to be real and took two boxes filled with $500 billion bonds with him. The Yakuza decided that if Cheney said they were real, he would try to cash some of them in Switzerland too.

Instead, the bonds were seized by the Vatican linked P2 Freemason lodge and by the operatives David Sale and Daniele dal Bosco.

The subsequent fight over these bonds revealed the existence of a top secret committee that had illegally seized control over the highest peaks of global finance. That committee is also known as the steering committee of the Bilderberg group. The legitimate and rightful owners of the world’s assets (the people of the planet earth) are now in the process of regaining control over the global financial system.

However, this is easier said than done because we are entering uncharted waters. At the top of the global financial system lies a book of top-secret codes and the controllers of these codes have been able to use them to create trillions of dollars out of thin air and play god.

The code books are now under the control of the White Dragon Society. There was, as we mentioned last week, a fierce 8 minute gun battle involving dozens of men and many types of weaponry as the Khazarians attempted to seize the code books. They were repulsed.

The problem we now face, however, is how to carry out a smooth transition to the new financial system without causing the enormous chaos and suffering that would result if the computers of the global banking system were suddenly shut down. There is also the delicate geopolitical power balance that needs to be handled with extreme care.

One example of how a misstep in this direction could lead to horrific consequences is the plan of a hardline faction in the Chinese military to “get rid of India,” so that the monsoon rains would reach the desert provinces of China. Of course, rational minds have prevailed in China as well as elsewhere and such a plan would never be carried out but it is an example of the sort of power that humans now have their hands on.

Any rash moves could thus literally trigger the destruction of the planet so there is a need to proceed with extreme caution.

The basic philosophy of the new financial system, however, is expected to be as follows: You are sitting across the table from another person. You each have a gun in your hand. If the person on the other side is a beautiful woman (or handsome man) you may decide to make love. If it is a fat man coming to rape you, you may decide to fight. You may also choose to just walk away from the table.

There is also a fundamental agreement to finance projects to turn the deserts green and replenish the oceans with fish. The new energy technology will be introduced in a manner that does not disrupt current financial and economic interests. The oil companies will be given major contracts to turn the deserts green as compensation for the gradual phase out of oil as an energy source. The commercial development of outer space will also be financed.

Part of this work will be carried out by a soon to be created meritocratically staffed International Economic Planning Agency. The non-corrupt parts of the traditional banking and financial system will be allowed to create two or more new offshore banking zones where they can carry out their own plans and projects.

Needless to say, changing how a planet is run is not an easy task and the transition needs to be handled with great care. That means it will take a bit of time. We also need to deal with the blackmail threats and power bases of the remaining Satanists and their allies.