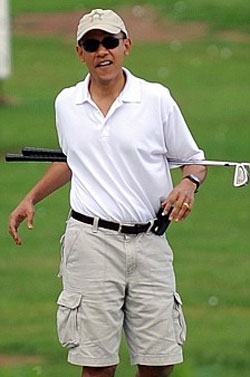 The Kenyan in the White House will sign to release the GS provided he gets his extortion money on the IQD revaluation.

The on-going battle rages between the customary conundrums … right v. wrong, good v. evil, thugs v. the common people. Our US President Barack Obama who is both ineligible to hold the office and totally incapable of carrying out the duties of said office is again resorting to thuggery … this time extortion.

The White Hats have been tracking the progress as patiently as everyone else allowing the good fellows in the international banking community to move through the process of being the meticulous mechanics they are. To find that it had stopped at Obama’s desk … again … gave us great pause as we had a feeling it meant more than waiting for a signature. True to form, Obama did it again. We never thought that our President could be so blatant in his demands. We shouldn’t be surprised as Congress allows him and his controllers, i.e. NWO gang of Bush, Clintons, Kissinger, Soros, et al to hold the American dollar hostage and threaten the world financial system … all for their own personal gain, attempting to leverage Obama’s temporary position to enrich their bank accounts, all the while financially destroying the American people.

The information contained in the attached Al Hodges letter is vital to the success of the World Global Settlements and, unfortunately, is very disturbing in its truthful content. You, the reader, needs to take the information to heart and know that this is the standard that Washington politics has come to.

This latest development, the extortion attempt by Obama, leaves us wondering how to respond.

Perhaps, we should start by apologizing for blocking his attempted extortion of $1,000 per package sent out by Federal Express to recipients of the Prosperity Packs, after all it was rude of us to do that. A quick calculation would indicate a nice “commission” for his trouble of making the phone call to allow them to go out. Perhaps this time we should request a written contract to sign. I’m sure his legal team could put something together for a basis in which to start negotiations.

And we haven’t heard yet on how he wishes to be paid this extortion money. We’re not sure if he’d like it in cash, a cashier’s check or money order. Or perhaps he’d like it wired to one of his overseas accounts at the Vatican Bank, the Bank of Santander, a bank in Honduras or maybe the Caribbean? If so, he’ll need to provide his routing coordinates as we’d hate to wire it to the wrong account, one under the name of Bush, Clinton, Kissinger or Soros. He’d NEVER get it back then. If he wants Ackermann at Deutsche involved, he should let us know that as well. We’re also wondering where he wishes the 1099 to be sent or would this be tax free money? And don’t worry; we’ll use the Connecticut Social Security for reporting to the IRS. We know, as President, he wouldn’t want to cheat them out of their money. How he reports it on his tax return and disclosure statements would be his problem.

Many of our long time readers are actively involved in the communications process, please continue. Call Washington and let them know you’re tired of the acts of this President and his participation with the Bush/NWO Cabal. Let them know that you demand action on the World Global Settlements. 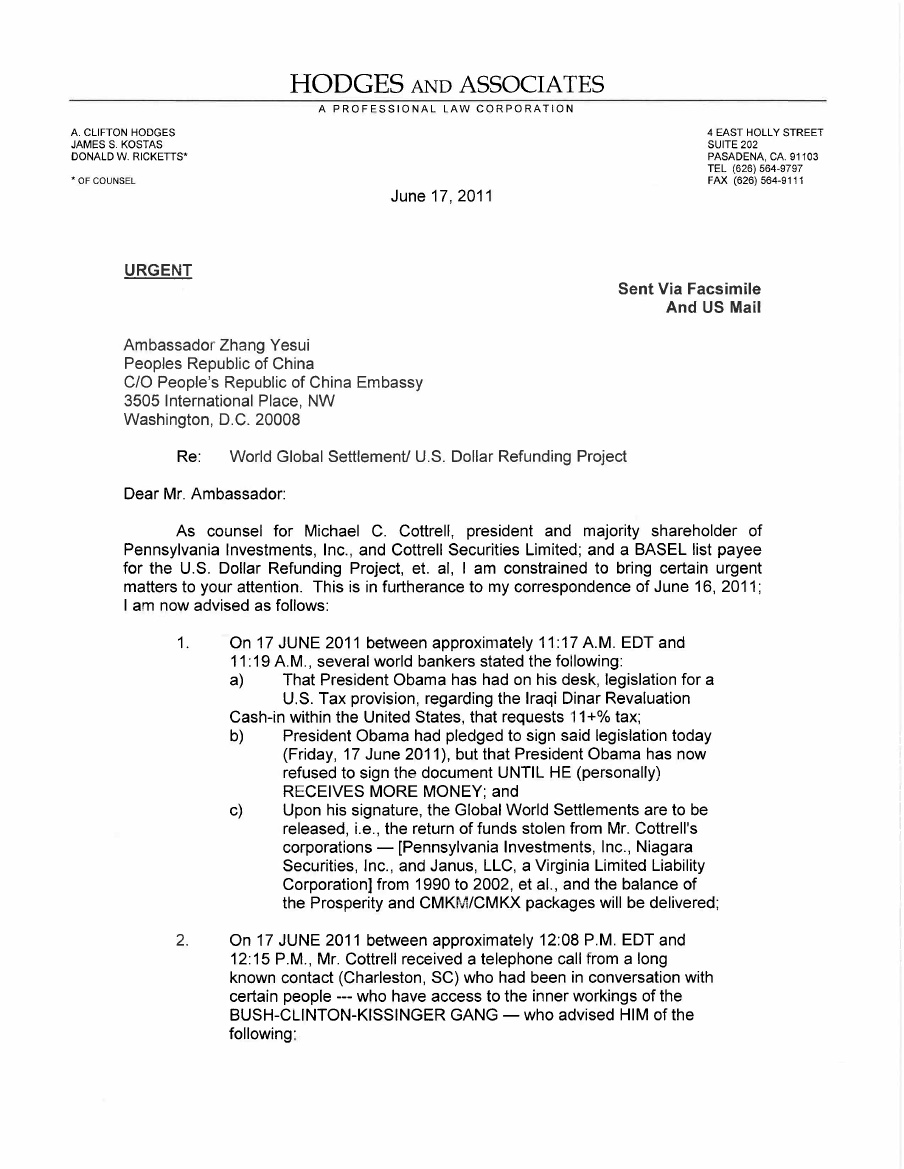 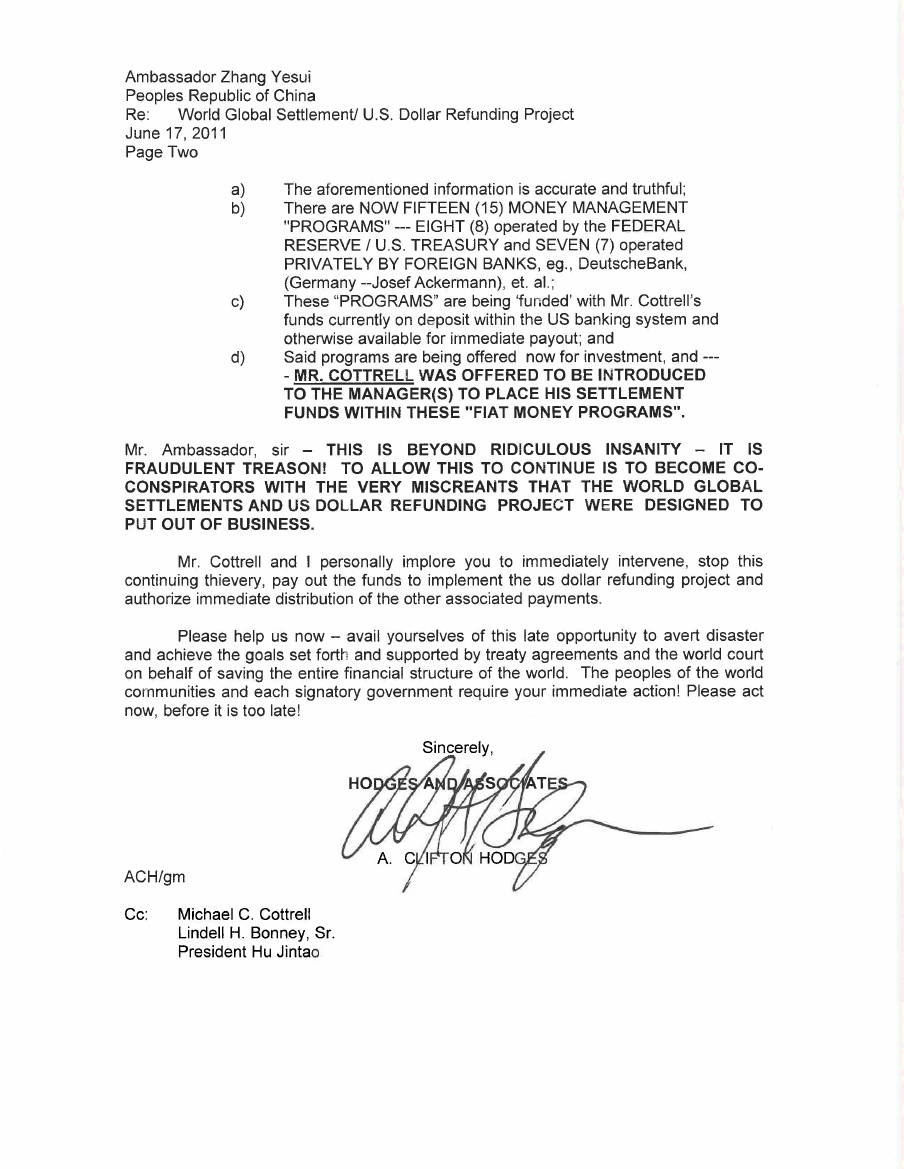 After being denied by Hawaii’s State Registrar and Chief Office of Health Status Monitoring, Alvin T Onaka, a May 9, 2011 UIPA request (see letter reproduced below) to examine the original, typewritten birth certificate of Barack Hussein Obama II, Attorney Orly Taitz turned to the The United States District Court, District of

Columbia and obtained a subpoena for Loretta Fuddy, Director of Hawaii Department of Health, to give a deposition at her office on June 27, 2011. The subpoena was issued by Judge Royce Lamberth in case number 11-cv-402, TAITZ V. ASTRUE and said:

Undoubtedly, the Indonesian Usurper’s Damage Control Team will now feverishly labor in league with the corrupt Hawaiian State Health Department officials and the equally corrupt Hawaii governor’s office to do everything possible to prevent Loretta Fuddy from appearing for a deposition because there is no “original 1961 typewritten” Hawaiian birth certificate to examine and revealing that on June 27, 2011 would ultimately result in the indictments of Loretta Fuddy, the governor, and numerous other Hawaiian government officials for felony conspiracy to obstruct justice.

So I don’t expect the deposition to take place, but this could be the ‘beginning of the end’ for the corrupt and complicit jackals who shame the people of Hawaii and disgrace the offices of the Hawaiian State Health Department and governor’s office. It might also be the first domino to tip over in the long awaited denouement of the most ineligible and contemptible scoundrel to ever enter the pages of American history, Barry Soetoro, aka Barack Hussein Obama II.

It’s hard to get over the hubris, arrogance, and criminality of these Hawaiian State Health Department officials. Do they not understand the meaning of the words “public record”? The reason that legislative bills, police records, real estate records, and vital statistic records-including birth records are all -under law- classified as “public record” is to allow any member of the public to examine them. The idea is that in a representative democracy, these records are available to the public to insure transparency and freedom from malfeasance through public scrutiny. The ludicrous defense presented of “protecting” the privacy of the record holders is untenable and contrary to established law.

P.S. While I do not know if she will give a deposition of June 27, I am quite certain, however, that Loretta will have no problem with “irregularity” for the next 30 days.

Supoena issued by Judge Royce Lamberth to Loretta Fuddy commanding her to give deposition on June 27, 2011 at her office in Hawaii: 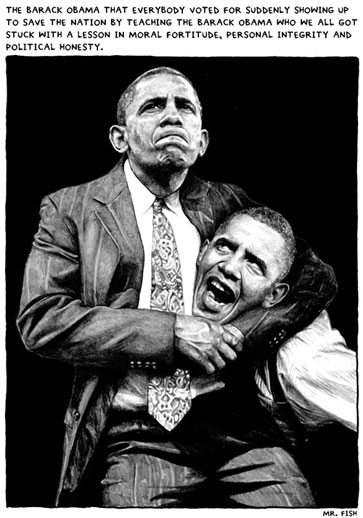