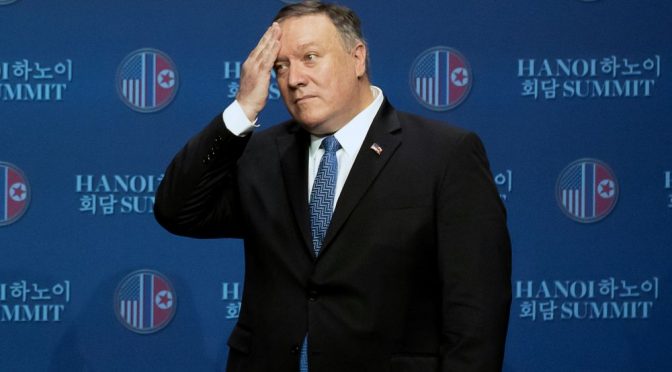 The U.S. body politic has degenerated to gibberish and empty threats, as bankruptcy and collapse are now a mathematical certainty.  That’s because the March 29th Brexit made it so that “the City of London is no longer the finance capital of the cabal,” both British Intelligence and Pentagon sources confirm.

When asked, “How is President Donald Trump responding to this?” a senior British Intelligence officer said, “Probably in a blind panic by this stage, to be very honest.”

Find this hard to believe?  Let’s step back a bit and look at what has happened so far this year to the U.S. government.  First, all military veterans withdrew from the Trump presidency as of January 1st.  Then the U.S. government shut down for 35 days, even as the U.S. military stayed fully financed.

When the U.S. government reopened, Trump had filled his cabinet with raging Zionist neocons.  They managed to keep operations going by stealing the American peoples’ tax refunds and hiking U.S. gas prices.  While this gave the debt-addicted Washington, D.C. another sugar high, it has begun to kill the U.S. economic recovery.

Trump, meanwhile, has been talking like a bankrupt junkie trying to convince everybody that great events were happening by saying things like, “Saudi Arabia will buy $450 billion worth of weapons, etc.” or “China will buy more than $1 trillion worth of goods from the U.S.”  The reality is that Saudi Arabia has only agreed to buy $14.5 billion worth of U.S. exports.  Also, even if China agreed to buy $1 trillion worth of overpriced U.S. goods, the fact is that the U.S. economy does not have the capacity to create these goods.  In any case, China is seriously thinking of declaring Washington, D.C. bankrupt, according to Asian secret society sources.

The Trump administration is now trying to keep itself afloat by forcing countries to buy its expensive shale oil and gas.  That’s the real reason for U.S. sanctions on Iran, Venezuela, and Russia, as well as for attacks on Syria and Yemen.  But this strategy is failing because the main oil importers—Europe, China, Japan, and India—have no interest in expensive U.S. oil and gas, and these countries are not going along with U.S. “sanctions.”  For a good analysis of this situation, I recommend the article below by Thierry Meyssan, the person who first scooped the 9/11 truth.

Pentagon sources note that “the arrest in Spain of former Venezuelan Military Intelligence Chief, Army General Hugo Carvajal has made the military even more loyal to Venezuelan President Nicolas Maduro, as the neocon coup failed royally.”  This means the world’s largest oil reserves remain outside of the cabal’s petrodollar system.

Arch-cabalist Henry Kissinger has been trying desperately and futilely to save the D.C. establishment and his petrodollar system by cashing bonds worth “quadrillions of dollars,” according to Japanese imperial family sources.  These bonds will never be cashed, the sources say.

Instead, something called the Quantum Financial System (QFS) is being implemented, multiple sources agree.  Since Japan’s financial markets will be closed for six days between April 27th and May 6th, which would be the longest financial market and bank closure since the end of World War II, it’s a good bet the transition will be implemented then.

The person who created the QFS says it had its origins in a “War College Power Transition Theory” that was “used in the liberation of Great Britain with pinpoint accuracy.”

CIA sources, for their part, say “Brexit is not about Europe or the UK alone. It is a huge satanic game with some senior members of Parliament being threatened if they leave the Club of Rome. Things are trying to shift, but the Old Guard will literally eat them alive should they try to escape.”

Now, according to an MI6 source, the world’s “armed forces and their intelligence arms” are using this power transition model to create “a global alliance of sovereign nation-states” to replace the collapsing New World Order.

The alliance of sovereign nation-states would also back “the creation of a global force such as the World Future Planning Agency,” says this source, who is a senior member of the traditional 13 ruling bloodlines.

This source was one of the key planners behind the “military counterintelligence operation that was central to the recent liberation of Great Britain.”

The operation to liberate the UK was triggered by whistleblowing by this person when he worked on “Sovereign Debt Markets at the Italian and Vatican desk,” at Barclays Bank. This whistleblowing led to the LIBOR rate-rigging scandal.

Here is his summary of the importance of this scandal: “The manipulation of the rates using a chat forum on Bloomberg became the largest-ever complex financial fraud in history and has—in the end game—bankrupted the entire industry and totally altered the trajectory of geo-politics, both overt and covert.”

Now he says the BIS, the IMF, and the World Bank “will be removed entirely,” because “they have fundamentally failed humanity and have committed very serious crimes against it, also.”

Of course, the Khazarian Mafia is not going to give up its control of these institutions and corrupt political systems without a fight.

Then, to distract public attention away from this electoral fraud, they staged a series of fake news events.

In Israel they staged a fake moon landing.

The photo below was sent by a Jewish CIA source with the following comment: “Attached is the fake photo of the fake Israeli moon shot. Note the perfect shot with the ‘Star of Satan’ clearly seen.”

They also put out a fake “first image of a black hole” that was widely derided as soon as it was put out. This did not prevent Khazarian-slave writers in publications like The Guardian or The New York Times to take this “photo” release as a cue to describe Brexit as a “black hole.”

Then of course they staged the so-called arrest of WikiLeaks founder Julian Assange.

We will not write much about this, since this farce has been widely exposed elsewhere.

However, we note that all the video and still images of the event came from a single source, Russia Today, which is a telltale sign of a computer graphic fake.

We also note that Julian Assange did not appear once on his balcony at the Ecuadorian Embassy in London after he was visited in 2016 by Pamela Anderson.

They also faked a Wikileaks “data dump” that had no really important disclosures in it.

You can be sure they did not mention 9/11 truth or Fukushima or other such crimes against humanity.

Fukushima was “a terrorist attack and a very serious international incident which has gone grossly underreported in the world’s press,” the MI6 source said.

He added it this “extremely serious matter” would be a major subject of upcoming war crimes tribunals.

In any case, the interesting thing about all these staged events is how they are now being immediately debunked, showing how much the Khazarian mafia has lost its power to manipulate public opinion.

Despite these hysterical efforts to distract attention away from their crimes, the dragnet is closing in on the Khazarian mafia, and especially their base of operations in Israel.

On this front, Pentagon sources note that “Trump tweeted ‘We will never forget’ with what Nancy Pelosi called ‘painful images of 9/11’ in reply to Congresswoman Ilhan Omar saying ‘some people did something’ on 9/11, as this now becomes a politically correct national conversation prior to truth bombs taking down Israel.”

This happened as Egyptian President Abdel Fattah el-Sisi “told Trump at the White House that Egypt won’t be part of the Arab NATO, making Iran the undisputed leader in the region,” the Pentagon sources added.

The regime changes that took place or are about to take place in Libya, Sudan, and Algeria are all connected to this resurgence of Middle Eastern and Muslim unity.

It looks like Benjamin Netanyahu will face historical justice by having the satanic Zionist project collapse under his watch.

On a final note this week, a ruling bloodline source confirmed to me that the Khazarian Mafia does use predictive programming.

That is to say, they do things like air TV programs about jetliners crashing into the World Trade Center buildings before staging the actual event.

That reminded me of when I was working for Forbes Magazine, a novel was published in which the Tokyo Bureau Chief of Forbes Magazine was killed with a weapon that causes heart attacks.

A few years later I was attacked by an individual carrying a white cylindrical device at Nagata-Cho train station in Tokyo.

The device fit the description of the heart attack weapon described in the novel.

Well, here is some predictive programming of my own: I see Benjamin Netanyahu in handcuffs at a military tribunal as he hears his death sentence being read out to him.

I also predict the Israeli military police will jail him and negotiate a two-state solution while they still have the chance to do so.

The alternative will be for Israel’s Jews to end up in a Turkish ghetto.