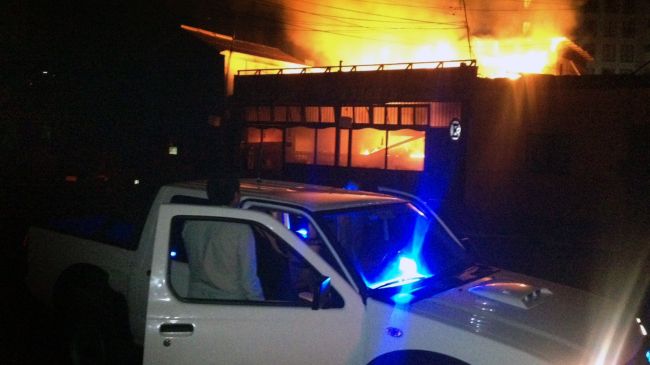 Just a day after ITCCS obtained an official acknowledgment of the Canadian Genocide involving 50,000 Kanata natives, and this happens…
… to preoccupy the mainstream mindset?

A man stares at a restaurant by the seashore in Iquique burning after a powerful 8.2-magnitude earthquake hit off Chile’s Pacific coast on April 1, 2014. Wed Apr 2, 2014 1:51AM

A massive earthquake measuring 8.2 on the Richter scale has struck near Chile’s Pacific coast, causing landslides and setting off a tsunami.

According to the United States Geological Survey (USGS), the quake hit at 8:46 p.m. local time (2346 GMT) on Tuesday at a depth of 20.1 kilometers (12.5 miles), 95 kilometers (59 miles) northwest of Iquique on Chile’s northern coast.
However, there have been no immediate reports of injuries or major damage.
The Pacific Tsunami Warning Center issued an alert for all of Latin America’s Pacific coast after the quake, while coastal residents of northern Chile evacuated as waves measuring almost two meters (6 ½ feet) struck ahead of the expected tsunami.

“An earthquake of this size has the potential to generate a destructive tsunami that can strike coastlines near the epicenter within minutes and more distant coastlines within hours,” the center said in a statement.

Chile’s emergency service reported some roads blocked by landslides.
Meanwhile, an official at Peru’s civil defense office said evacuations have been underway on that country’s coast.
Central and southern Chile were shaken by a 8.8-magnitude earthquake in February 2010 followed by a tsunami that wrought havoc on dozens of towns. Over 500 people were killed in the quake.
The same coastal area has seen numerous quakes in recent days. On March 30, a 6.0-magnitude earthquake struck off Chile’s Pacific coast, followed by at least two moderate aftershocks, the USGS said.
MR/AS/MHB
source »
Please support us by downloading our Towards Healthcare Emancipation – Premium Edition, a fully illustrated eBook about how you can implement a low cost but extensive and decisively effective healthcare system in the comfort of your own home.
With this eBook you can easily defeat cancer, AIDS and all other parasitic diseases for good. Find out more about it here.
The proceeds from this book will be used to fund our next project, Towards Energy Emancipation.
The aim is to make the subject of free energy more understandable for the layman so that anybody could replicate and install his own power plant and be completely living off-grid.
If you haven’t done so, please like our FB page to encourage others to learn more about our work.
Thank you very much for your valuable support.