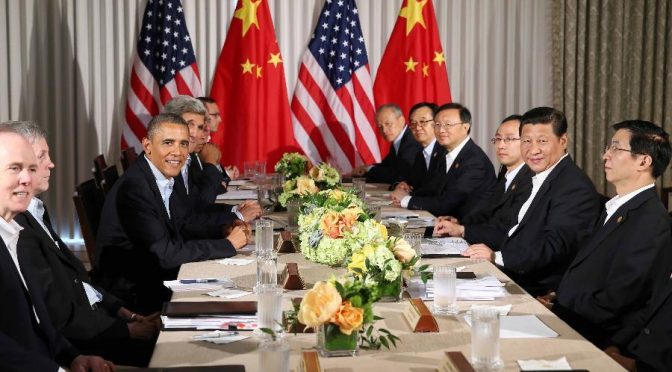 Don’t look now, but Washington just blinked.
As we’ve documented exhaustively over the past week, pressure has been building steadily for the US to strike some manner of conciliatory tone towards China with regard to the Asian Infrastructure Investment Bank, a China-led institution aimed at rivaling the US/Japan-backed ADB. Britain’s decision to join China in its new endeavor has prompted a number of Western nations to throw their support behind the bank ahead of the March 31 deadline for membership application.

Because the AIIB effectively represents the beginning of the end for US hegemony, the White House has demeaned the effort from its inception questioning the ability of non-G-7 nations to create an institution that can be trusted to operation in accordance with the proper “standards.” Now, with 35 nations set to join as founders, it appears Washington may be set to concede defeat. Here’s more, via WSJ:
The Obama administration, facing defiance by allies that have signed up to support a new Chinese-led infrastructure fund, is proposing the bank work in a partnership with Washington-backed development institutions such as the World Bank.
The collaborative approach is designed to steer the new bank toward economic aims of the world’s leading economies and away from becoming an instrument of Beijing’s foreign policy. The bank’s potential to promote new alliances and sidestep existing institutions has been one of the Obama administration’s chief concerns as key allies including the U.K., Germany and France lined up in recent days to become founding members of the new Asian Infrastructure Investment Bank.
The Obama administration wants to use existing development banks to co-finance projects with Beijing’s new organization. Indirect support would help the U.S. address another long-standing goal: ensuring the new institution’s standards are designed to prevent unhealthy debt buildups, human-rights abuses and environmental risks. U.S. support could also pave the way for American companies to bid on the new bank’s projects.

“The U.S. would welcome new multilateral institutions that strengthen the international financial architecture,” said Nathan Sheets, U.S. Treasury Under Secretary for International Affairs. “Co-financing projects with existing institutions like the World Bank or the Asian Development Bank will help ensure that high quality, time-tested standards are maintained.”
So essentially this is just the old “if you can’t beat ‘em, join ‘em” strategy disguised as an attempt to bring the AIIB into the fold of US-dominated multinational institutions.
But make no mistake, this is at best an example of Washington cutting its losses and at worst an outright surrender, as no one should pretend that the AIIB, which is starting with $50 billion in capital, will remain subservient to the ADB which, after five decades, has barely three times that amount:
Infrastructure needs around the world are enormous. Emerging countries need new ports, railways, bridges, airports and roads to support faster growth. Developed economies, meanwhile, must replace aging infrastructure. The Asian Development Bank estimates its region alone faces an annual financing shortfall of $800 billion a year. The consulting firm McKinsey & Company estimates global infrastructure-investment needs through 2030 total $57 trillion.
By comparison, the Asian Development Bank has just $160 billion in capital and the World Bank-which has co-financed with other regional institutions for years—has around $500 billion. The China-led bank plans to have a $50 billion fund to start.
And with that, one more leap towards de-dollarization is now in the books.
ZeroHedge

We are updating our DNS to www.geopolitics.co to make it more descriptive to our discussions here. Our old www.eclinik.co will point to our sister site www.myeclinik.com soon`.
Please update your bookmarks accordingly. Thank you very much.

One of the sources of funds for the Cabal is Big Pharma. It also serves as the weapon of mass destruction via vaccine tainted with live virus it is supposed to protect us from, and the deadly chemicals used to treat our diseases that they caused through our GMO / pesticide contaminated food supply.
We can avoid using drugs, defeat any viral attack and scaremongering easily by knowing how to build our own comprehensive antiviral system. Find more about it here.