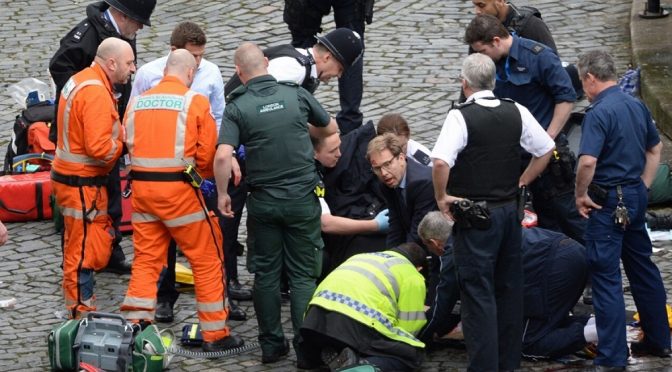 It’s not only the choice of Skull and Bones date, but the usual “dead lone attacker” element eliminates all the thrill, of which the fake news media would like to defeat by increasing the number of deaths and arrests, as the days go by. Yes, the overnight vigil will certainly add more drama and credibility to the whole event.
If the doctors above looked more like Special Forces personnel, they might just be. Because, it’s not a coincidence that the military industrial complex, through their embedded sales agent at the Pentagram, is requesting additional billions to the defense budget for this year.

They do need to fight this clandestine war with a fat budget, or else…

by Kevin Barrett, Veterans Today Editor
A MASSIVE, ICONIC terror event (a couple of people hit by a car, a policeman stabbed, an alleged perp shot) shocked and galvanized the world today. Stop the Presses!

But wait a minute. More than 270,000 pedestrians are killed by vehicles each year, while well over a million are injured. That means more than a thousand are killed, and perhaps three or four thousand injured, every day.
Of the thousands and thousands of vehicular casualties that happen every day all over the world, a tiny fraction just occurred near the Parliament building in London. The logical inference: Somebody spent a rather small sum of money to arrange a publicity stunt which did not even make a faint blip on the day’s (much less the year’s) accident statistics — but which reaped hundreds of millions if not billions of dollars worth of virtually free publicity for the perpetrators.
Now who would do a thing like that?
As in all criminal cases, we must answer that question with another: Cui bono? Who benefits?
More often than not, these things are blamed on “radical Muslims.” (The dead perp in the photo has the typical, iconically-“Muslim” salafi beard.) But it’s hard to see how actual radical Muslims, whose goal is to push Western imperialists and colonialists out of historically Muslim lands, gain anything from such deeds. On the contrary, attacks on Western civilians provide a huge PR boost to the imperialists and colonialists, and free up huge sums of money to be spent on military action against “radical Muslims.”

So whoever did this presumably wants to convince you to give up your hard-earned money, and perhaps your freedom as well, and support the hyper-militarization of the West — and an accelerated war against Muslims. Just like the previous London attack in July 2005! Watch terror consultant Peter Power confess that his company was running “terror drills” at the exact times and locations that the real bombs went off!
Another clue: The “vehicular attack” and “stabbing attack” motifs are Israeli. These are among the types of attacks that have characterized the latest Intifada, or Palestinian war of self-preservation against slow-motion Zionist genocide. (The real Palestinian attacks target Israeli soldiers and settlers, who are defined as Occupation forces and thus legitimate targets under international law; while any attacks targeting civilians should be assumed to be false flags.)
Israel wants the West to join its genocidal war on the people of the Middle East. As the Dancing Israelis, part of the Israeli team that blew up the Twin Towers and WTC-7, told the police who arrested them on September 11th, 2001:

After Israeli agent Michael Chertoff shipped the 9/11 perp “Dancing Israelis” home to Israel, they went on national television and stated:

“The fact of the matter is we are coming from a country that experiences terror daily. Our purpose was to document the event.” (ABC News)

The Israelis are desperate to drag the West into the Israeli war against Islam, Muslims, and Middle Eastern people in general. That is why virtually every major “Islamic terror” event since the Cold War ended in 1989 is a known or suspected Gladio B operation with Israeli fingerprints all over it.
Another sign of a suspected false flag is the “dead perps don’t talk” syndrome. If a terror event were real, the authorities would do everything possible to capture the perp alive in order to interrogate him and take down his terror network. But when terror perps are shot down like dogs, with no attempt made to save their lives so they can be interrogated, one must suspect that they are being silenced. (Seriously: How hard would it be to kneecap or otherwise incapacitate a guy with a knife?)

This is now an annual ritual…

“Radical Muslims” (meaning fanatical wahhabis and other extreme-puritanical types) do not celebrate other people’s holidays…least of all the holidays of satanists.
Yet we are told that ISIS, whose acronym invokes a pagan goddess, has just conducted a big human sacrifice in Brussels on a major satanic holiday.
And it’s somehow all the fault of “radical Islam.”
Yeah, right.
The date 3/22 (322) is not only the emblem of America’s leading CIA-Freemasonic elite group, Skull and Bones.
3/22 is also the culmination of the three-day Satanic Feast of Pelusia, consisting of – get this – “the invocation of Isis.”
When Jim Dean says “you can’t make this stuff up,” he is understating the case.

As the freemasonic Satanists invoke Isis (or ISIS) on 3/22, they also pay homage to another female deity: Ishtar, the “goddess of fertility, love, war, and sex.”
And it gets better (or worse, depending your point of view): Ishtar “was particularly worshipped in the Upper Mesopotamian kingdom of Assyria (modern northern Iraq, north east Syria and south east Turkey).” That would be the territory that is currently ruled by … you guessed it … ISIS.
If you aren’t rolling your eyes and screaming WTF?!,… you’re not paying attention.
I’ve been a Muslim since 1993, and have a Ph.D. with an Islamic Studies component. One thing I can tell you is that observing satanic holy dates associated with Isis and Ishtar is just not “Islamically kosher.”
Muslims are not big on pagan goddesses. Trust me.
ISIS is a US-Zionist group. It has nothing to do with Islam.
Muslims are not into human sacrifice. The biggest Muslim holiday, Eid, celebrates The End Of Human Sacrifice. It commemorates the moment when monotheists broke with the sacrificial practices of pagan-god-and-goddess-worshippers, who were in the habit of burning or burying their own children alive as offerings to their deities. (For a convincing analysis of human sacrifice and paganism, read René Girard.)
And Muslims do not kill innocent people:

Satanic human sacrifice, as opposed to Islam, revels in the sacrificial killing of innocents. The more innocent the victim, the better, from the satanic perspective…and from the perspective of freemasonic-Satanist New World Order operatives.

Another giveaway on this one is that while the “lone nut attacker has been neutralized for good,” the police lockdown and media coverage will be extended indefinitely, without allowing the people to express their sympathies through the same YouTube chatroom.
https://www.youtube.com/watch?v=y60wDzZt8yg
Just like all previous false flag operations, this “lone nut attacker” has been known to the intelligence community all along, i.e. in this case, to the MI5.

How convenient!
It doesn’t matter whether you believe in these rituals, or not, but they do. So, let’s not try to sensationalize this pagan ritual any more than to expose the maniacal purpose that it really is.
Most importantly, don’t forget you are supposed to stay in your crib and cower, as you watch the entire over-extended show on TV. They’re not through with it yet.

Can the UK gov tell us what is Qaeda fixer Mousa Alomar doing in London?! Ah, he is against president Assad of Syria! Sorry! pic.twitter.com/DCxmDI6u4s