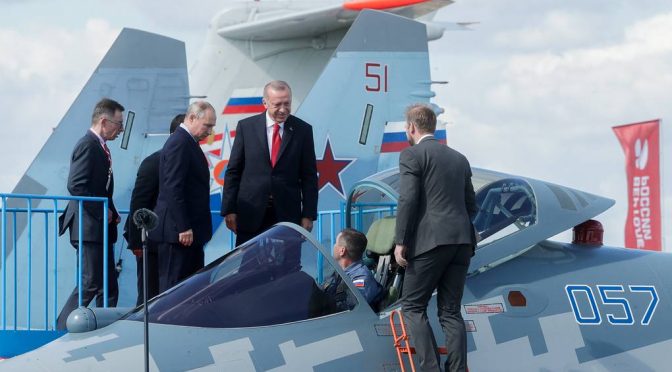 Erdogan was in Moscow this week sharing an ice cream cone with Vladimir Putin and cutting deals. The first part of that deal went into effect today; a ceasefire in the de-escalation zone in Idlib province.

If the battle is won, in essence, and the jihadists on the run, why call a ceasefire now?

Simple. Turkey needs to be able to recall its troops from the area and disengage with the rebels it has been backing there for years. That was what Erdogan bargained for in Moscow, the lives of his troops.

That should tell you how serious Putin is about retaking Idlib and how little patience he has now for Erdogan’s nonsense.

As Bernard from Moon of Alabama points out the proof of this is Turkey blocking the rebels’ escape from Idlib back into Turkey.

Today about a thousand ‘rebels’ tried to cross through the Al-Bab border station into Turkey. Videos show a long line of cars of fleeing people. At the front several hundred men managed to enter Turkish ground. They were pushed back by Turkish army forces with water cannon trucks, tear gas and finally with gunfire. At least two ‘rebels’ were killed.

Putin has been very clear about his policy from the beginning. Terrorists are to be wiped out. They are not to be allowed to escape and regroup to show up and cause trouble somewhere else.

The implicit message here is that Erdogan cannot do the U.S.’s bidding on this. He must withdraw support from them and leave them to hang.

If the U.S. and Israel want these guys kept alive then they should stop acting through Turkey’s proxy.

The howls from the U.S. corporate media will be ridiculous. There will be infuriating bloviation from Secretary of State Mike Pompeo. John Bolton’s mustache will be heartsick that opportunities to kill more decent people will be lost.

Netanyahu will likely bomb some SAA ammunition dump and declare himself the greatest military mind of the 21st century.

What was that the gods making men mad?

The failure to reinforce Khan Sheikoun and the open hostility by Syrian forces against the Turkish resupply convoy was Erdogan’s end-game in Idlib.

Putin by working with the SAA finally forced Erdogan to choose what’s more important: his relationship with the U.S. or that with Russia and China, who are currently supporting his economically-challenged regime?

Erdogan got what he wanted from the U.S. on removing the Kurdish SDF forces from the northern part of Syria. He made that deal when it looked like he would be able to hold Khan Sheikoun to keep maximum pressure on Bashar al-Assad’s government.

The U.S. is desperately trying to starve Syria of oil to keep the SAA from having the resources needed to finish its job. It is failing.

All of these little battles they’ve lost, inch by inch. The collapse of the coalition to starve Yemen has fractured because of this. The border crossing between Iraq and Syria is now open. Iran is surviving Trump’s sanctions as China’s oil imports are rising again.

Oil tankers will make it to Syria.

The amount of time and money the Trump Administration sank into stopping one Iranian oil tanker is ludicrous and now highlights just how pathetic and ineffective the whole program is.

With each little victory, each tanker of oil offloaded, town liberated and each day they survived, the position of the U.S. forces in Syria weakens.

And soon Trump will be forced to make a real decision, not some fake one he doesn’t have the stones to follow through on. He’ll have to decide if Syria is worth it.

The ceasefire will be temporary. It is Erdogan’s last chance to truly gain Putin’s trust and exit Turkey from an untenable situation. He cannot use his troops as human shields anymore to protect the jihadist attacks on government-held territory.

He’s been trying to play Russia and the U.S. off each other to forge an independent path and hold onto his gains in Syria, while at the same time pressuring Cyprus.

Putin wasn’t having any of that. The price for Turkey’s energy stability which Putin has provided is the end of Turkish-backed opposition in Syria. The price of Turkey’s territorial stability is also bound up in Putin’s support. Because it is clear that the U.S.’s goal is an independent and oil-rich Kurdistan under its proxy control.

Putin understands that Turkey needs to be put back in its box. Because this is the only way forward that puts Israel’s expansionist ambitions back in the bottle where they belong.

Trump’s over the top support for Israel emboldened everyone to think they had this campaign in the bag. Meaning, everyone in the U.S.’s orbit — Israel, Saudi Arabia, Turkey, the UAE, the U.K. — all overextended themselves. In so doing, they became exposed to counter-attack and to key moments of failure.

Khan Sheikoun was one of those moments. And with Turkey no longer providing support the jihadists there, they will be wiped out, paving the way for the reintegration of Syria.

As I pointed out last week, the Houthi drone attack was another. The UAE cutting deals with Iran after the attack on oil tankers at Fujairah was another. These were all small victories which have big implications.

Millions can return to rebuild Syria once this is campaign is over which Russia, China and Iran will take the lead on in defiance of horrific and cruel U.S. sanctions.

The big question is what Israel will do here to stop this. Because they are the last wild card.

Bibi Netanyahu is putting on his best show before September’s election. He’s opened Israel up to a response by Hezbollah and Lebanon after going way too far there and in Iraq.

One can only hope that Trump will finally see the folly of this policy, understand that the conditions to enforce the Kushner/Netanyahu plan for subjugation of the Palestinians is dead and begin reversing course.

There are signs that he obliquely understands this but Trump’s inability to curb his ‘enthusiasm’ is his Achilles’ heel.

The fate of tens of millions of people hangs in the balance.

One Last Ceasefire Before Oblivion for Jihadists in Syria