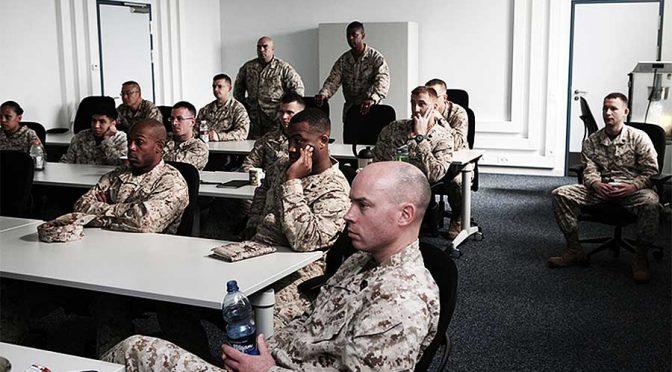 The Marine raid last week on CIA headquarters in Langley, Virginia has yielded a huge haul of actionable intelligence, say Pentagon and other sources.  “[U.S. President Donald] Trump is winning BIG, with Clinton-linked pedo rings busted in China as well as the Philippines, Africa, and Germany.  Military tribunals and sealed indictments across the USA are approaching 4,000,” according to Pentagon sources.

This raid was made possible because Trump signed an executive order on October 20th to recall retired military to active duty in order to “take down the Bush-Clinton cabal, the Jewish mafia, and purge the CIA and FBI of traitors,” the sources say.

The sources say that during the November 18th raid on CIA headquarters, computers and documents were seized and as a result, “some 400 drug facilities were located and the U.S. military began bombing them in Afghanistan on November 19th.”

They added that the bombed locations were labelled as the Taliban’s in order “to be politically correct.”  In other words, they do not want the world to think there is a civil war going on inside the military-industrial complex.

In any case, “The Marines have proven once again that they are semper fidelis (always faithful), as this was not just a military operation but an intelligence operation, a psychological warfare operation, and the largest anti-drug operation in history,” the sources continue.

In addition to cutting off heroin money from Afghanistan, the cutting off of air flights and land connections to North Korea has stopped the flow of amphetamine money to the Khazarian cabal as well, according to Asian secret society sources.

The mass arrests and deportation of the MS-13 El Salvadorian gang who are hired killers for drug kingpin El Chapo, as well as a new attack on the Mexican and Colombian drug cartels, means cocaine money from South America is also being cut off.  The ongoing legalization of marijuana worldwide has also cut off that source of Khazarian black money.

With CIA drug money influence drying up, the International Criminal Court is poised to prosecute the CIA and the Bush cabal for torture and other war crimes in Afghanistan as well as elsewhere, the Pentagon and other sources say.

Also, one of the largest corruption cases in U.S. military history has led to the investigation of 440 people, including 60 admirals—one third of the Navy’s top brass.

The removal of these corrupt officers, mostly stationed in Asia, means the 7th Fleet is soon going to stop protecting the corrupt politicians in Japan, South Korea, and the secret Khazarian colony of North Korea.  This will mean that U.S. arrests will be followed by similar arrests in Asia.

The Japanese criminals involved in the March 11, 2011 tsunami and nuclear mass-murder attack on Japan, fearing for their lives, have detained whistleblower and Gnostic Illuminati Grandmaster “Alexander Romanov,” aka Slasha Zaric, and confined him in inhuman conditions at the Hasegawa Hospital in Fuchu, Tokyo.  The hospital phone number is 81-422-31-8600.

Their assets will be impounded and Zaric will be compensated for the harm that has been done to him, say White Dragon Society (WDS) sources.  Of course, senior masterminds in the U.S., Italy, and Switzerland will also be brought to justice for these crimes.

Many top Khazarian mobsters like Bill Gates and George Soros have already been “taken out of commission,” WDS sources say.

Next among the most prominent people expected to be taken down are Eric Schmidt of Google, Jeff Bezos of Amazon, Mark Zuckerberg of Facebook, as well as Masayoshi Son of Softbank and many other oligarchs who have been used as funnels to launder privately-owned central-bank fiat money into the real economy. Japanese right-wing sources say that Son has “already been dealt with.”

Meanwhile, a source within U.S. Marine headquarters also provided sordid detail of other Khazarian crimes that were uncovered in the raid. This was received via e-mail from a CIA white-hat:

From a Marine at CIA headquarters

I’ve listed the following 23 ITEMS to pique your interest and summarize what’s happening: