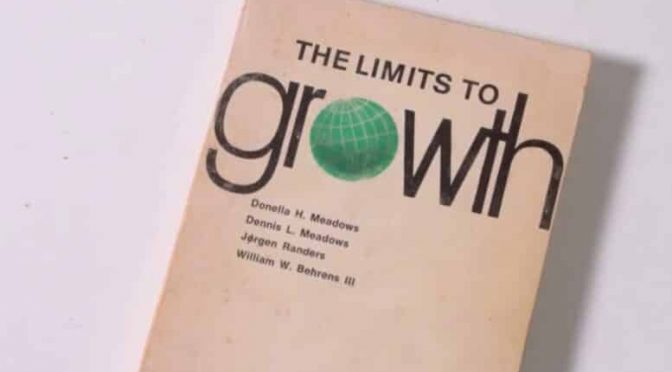 This view from Sweden reiterates the history of climate alarmism as being rooted in the Club of Rome, Maurice Strong, and the Rockefeller dynasty. When David Rockefeller created the Trilateral Commission in 1973, its stated goal was to “foster a New International Economic Order.”

Today, there are several synonyms for the NIEO: Circular economy, smart growth, sustainable development, Green New Deal and the Great Reset. These all point back to historic Technocracy, a resource-based economic system vs the price-based system of Free Market Economic theory.

In the shadow of the Corona pandemic, Sweden has introduced a new environmental strategy called “Circular Economy – Strategy for the Transition in Sweden”. This agreement between the government, the Center Party and the Liberals will bring about a dramatic change in our entire society where red-green socialism has a full impact.

Circular Economy is based on the recycling tank and maximum utilization of all resources. Fine words which, unfortunately, conceal a dark backside, namely a red-green agenda that benefits a few, restricts our freedom and harms the environment. To be effective over time, you need the Internet of Things, with constant connection where all material flows and are followed in real time throughout the life cycle. According to philosophy, this should lead to a world without waste, since clothing, furniture, lighting, appliances and means of transport are not owned but rented, which is giving producers incentives to make products more sustainable.

Entrepreneurs and freelancers will market themselves through digital platforms, providing reduced prices and greater accessibility for the consumer. Companies such as Airbnb for the rental of private homes and Uber for taxi ordering are now increasing frivolous competition from operators without professional experience, training, union membership, fixed costs or tax liability in the form of VAT and employer’s contributions. This provides access to global labor for temporary jobs offered by TaskRabbit, Ryan Air or Amazon, which has been criticized for a race to the bottom with temporary microjobs without any security whatsoever.

Here we see forced collectivisation and proletariisation, where people go from being employers or self-employed to being employed as low-wage workers. A historically proven concept with disastrous results as a result. From the turn of the year 2021, swedes now get in good circular spirit tax deductions for screwing together furniture, leaving clothes at dry cleaning and installing solar cells. At the same time, a fully functional nuclear reactor isbeing shut down. The justification is that it is no longer profitable. This is because the government has introduced an energy effect tax, which is fully in line with the Green Party’s philosophy of either taxing or closing down.

CLUB OF ROME – ORIGIN OF THE CLIMATE THREAT

The origins of the Circular Economy are found in Barbara Ward’s book Spaceship Earth (1966) where Earth is a closed system, as on a spaceship, with finite resources that must be used and reused. “Spaceship Earth – The Life Support System” is also the title of a chapter in the Rockefeller Brother Foundation’s 1977 book “The Unfinished Agenda”, a book that has since been promoted by the Club of Rome.

The same year this book was published, the circular economy concept was created by the Walter Stahel of the Club of Rome. The Club of Rome is a Masonic lodge founded in 1968 on David Rockefeller’s estate in Bellagio, Italy. The Member Squadron is a traditional collection of grandiose reformers with heads of state, UN bureaucrats, leading politicians and government officials, diplomats, scientists, economists and big business leaders. A collection from all over the world with a strong side of rich Western “elite”. This political lodge also brings together multi-billionaires in the Rockefeller, Rothschild and Soros families along with political chameleons such as Anders Wijkman and industrial magnates such as the now deceased oil businessman Maurice Strong.

In 1972, the Club of Rome published the acclaimed report “The Limits of Growth”, which reveals directly racist ideas based on Malthus’s philosophy that the population tends to grow faster than the means of supply. The working classes, the poor, are therefore condemned to a life on the brink of starvation if they do not exercise severe sexual abstinence¹.

MAURICE STRONG – THE MAN BEHIND THE SCARE MONGERING

Now the late Maurice Strong is one of the industrial tycoons who have been part of the Club of Rome’s circle of grandiose reformers. Photo by Lymantria, CC BY-SA 3.0.

Ahead of the first environmental conference in Stockholm in 1972, Maurice Strong prepared “Only One Earth: The Care and Maintenance of a Small Planet” together with economist Barbara Ward and microbiologist Rene Dubos. The report summed up the findings of 152 leading “experts” from 58 countries in preparation for the global UN meeting on the environment chaired by Maurice Strong. In the same year, he created the United Nations Environment Program (UNEP) and made a fortune as a businessman for Alberta Oil and the mineral industries. He was also good friends with David Rockefeller who chaired the Club of Rome. In addition, he was the man who created the scare mongering about global warming:

“Both the industrial nation and the car engine use fossil fuel. You can stop the engine by stopping the fuel supply, but if this is done, it will be an outcry which is politically dangerous. However, you can stop the engine by plugging the exhaust pipe if carbon dioxide is shown to be the contributing factor to global warming, which destroys the planet, this will justifies plugging again the exhaust pipe”².

Furthermore, Maurice Strong contributed to the creation of the Intergovernmental Panel on Climate Change (IPCC) in 1988 by merging the World Meteorological Organization (WMO) and UNEP. A smart move was to bring the WMO and its official bureaucrats into the United Nations. The meteorologists were able to easily take and accompany the politicians wherever they wanted.

An investigation by the United Nations Oil-for-Food Programme, conducted by federal investigators in 2005, revealed that Strong had certified a check for USD 988 885 (today the equivalent of USD 1 610 431) printed on “Mr. M. Strong” by Jordanian bank while working for Kofi Annan at the United Nations. The check was personally handed over to Strong by a South Korean businessman who in 2006 was convicted in New York Federal Court of conspiracy and bribery by U.N. officials to rig the Oil-for-Food program in Saddam Hussein’s favour.  Strong was never convicted of any wrongdoing, but he resigned from his UN position on the grounds that he “went on the side-lines while the clouds dissipated”.

In 2017, the World Economic Forum started the public private collaboration initiative “Platform for Accelerating the Circular Economy” (PACE) with Philips CEO Frans van Houten as chairman and with the British solo sailor Dame Ellen as the frontman. Already in 2009 she had founded the Ellen MacArthur Foundation together with the companies Cisco, BT Group, B&Q, Renault and National Grid and by 2013 she had been elected as a member of the Club of Rome.

In 2016, former EU parliamentarian Anders Wijkman, who is linked to Globe, Club of Rome and the World Future Council, carried out a “study” for the Club of Rome based on models that predicted positive effects on the climate, environment and economy. He also pointed out the commitment of the European Commission that resulted in the CircularEconomy Package.

ANDERS WIJKMAN CAN BE FOUND IN SIX DIFFERENT BODIES

A more professional lobbyist and political chameleon than Anders Wijkman can hardly be found. Nevertheless, the red-green government has hired him as chairman of a parliamentary inquiry into the “climate strategy” called “Environmental Goals Committee” carried out by the “National Committee for Climate Research”. At the same time, he is honorary chairman of The Club of Rome and chairman of Circular Sweden, where he, together with his unscrupulous club, is sponsored with tax money and money from companies such as IKEA, H&M, SCA, Coca-Cola, which thereby helps to whitewash his tainted environmental image.

If Sweden had a constitution worthy of the name, it would have banned this type of linkin the democratic process. Instead, the pandemic is now taking advantage of to push through changes that will have dramatic consequences for our entire society.

Under the radar of the pandemic, on 9 July 2020, the government departed from the principles of democracy with one single purpose – namely to achieve the world-changing ideas of global governance, population control and zero growth of the Green Party and the Club of Rome. In the days surrounding the 2020 Christmas rush, it then took the opportunity to introduce a pandemic law that makes advice and calls for laws with a penalty payment and, at worst, a ban on the nutrition of companies that lack to limit the spread of infection.

Now the government can work for zero growth and decide which companies will prosper and which ones will die out. In the early 1980s, the Danish lecturer Steen Steensen said “With the help of ecology, goals are now achieved that socialism only dreams of”. One can not more than agree, because with Sweden’s new Circular environmental strategy, red-green socialism is a fact.

2 thoughts on “Club Of Rome: The Origin Of Climate And Population Alarmism”