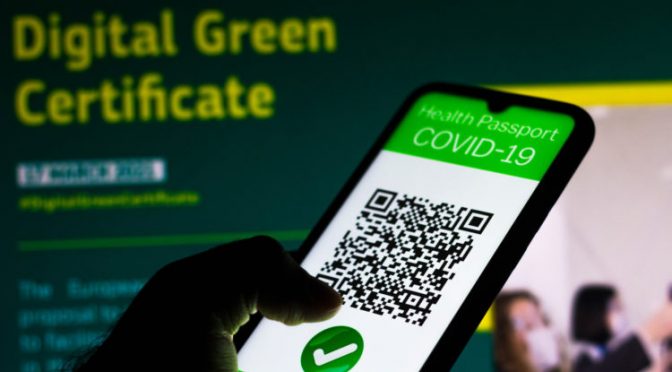 A spokesperson from the Global Blockchain Business Council (GBBC) reached out to correct the phrase “forced consent” to “forced consensus”, which obviously is far worse than the original considering the herd mentality of governments worldwide.

The updated quote would then be:

“I’m hoping with the desire and global demand for some sort of vaccine passport — so that people can get traveling and working again — will drive forced consensus, standardization, and frankly, cooperation across the world” — Sandra Ro, CEO at Global Blockchain Business Council

A digital identity encompasses everything that makes you unique in the digital realm, and it is a system that can consolidate all of your online activity data, including which websites you visit, your online purchases, health records, financial accounts, and who you’re friends with on social media.

It is also a scheme that, when used by authoritarians like in Communist China, enables a dystopian social crediting system where freedom is granted and restricted based on how citizens behave and who they associate with in both the physical and digital worlds.

The WEF has been pushing digital identity under the banner of its great reset agenda since its official launch in June, 2020, in which the globalist think tank envisions worldwide adoption of digital IDs through public and private partnerships.

During today’s session, the speakers made a lot of positive points on how digital identities are being used by various governments around the world to make life more convenient for their citizens, such as delivering essential goods and services at lightning speed while maintaining a high level of cybersecurity every step of the way.

The panelists did not discuss how digital identity schemes could be abused by governments and corporations.

However, the panelists agreed that the biggest obstacle to digital identity adoption, at least in the US, was a lack of trust in government.

Therefore, much of the session was dedicated to how to win over the people and get them onboard with handing over their personal data to the government.

“I think the US is going to be very hard-pressed to get a national identity system […] I think we’re going to have our own brand of fragmented identity mixed with public-private partnerships” — Sandra Ro, CEO at Global Blockchain Business Council

Sandra Ro, CEO of the Global Blockchain Business Council, told the panel that everything ID-related in the US was politicized, which presented obstacles to trust in digital identity adoption.

“In terms of increasing trust, I think it’s a very different mosaic in the US from maybe even 10 years ago,” she said, adding, “I think we have a very politically charged environment, and frankly, that gets in the way of actually the practicality of instituting an identity system.

“I hope that gets mitigated, but I think the current environment in the US — everything ID-related is getting politicized; fairly or unfairly, depending on which side of the fence you sit.”

According to Ro, vaccine passports offer a potential backdoor that could drive forced consensus, standardization, and cooperation around the world.

“Everything has been accelerated because of the pandemic, and a lot of the attention right now is on COVID passports or vaccine passports. Do we digitize that? How does it work? How does that connect with your identity? How do we start traveling again?” said Ro.

“I’m hoping with the desire and global demand for some sort of vaccine passport — so that people can get traveling and working again — will drive forced consensus, standardization, and frankly, cooperation across the world,” she later added at the very end of the session.

“I think the current environment in the US — everything ID-related is getting politicized — fairly or unfairly, depending on which side of the fence you sit” — Sandra Ro, CEO at Global Blockchain Business Council

For Ro, developing nations have a better shot at adopting a digital identity scheme on the blockchain over places like the US because they don’t have legacy systems in place that are lined with red tape.

“I think the US is going to be very hard-pressed to get a national identity system in the way that Ukraine has done, or Estonia, or some of the other countries that are out there like India as well.

“I think we’re going to have our own brand of fragmented identity mixed with public-private partnerships. I think that’s the only way the innovation’s really going to happen,” Ro added.

The technology for digital identities is already here, and is in fact being used in several countries around the world.

One of the most ambitious countries in this regard is Ukraine.

“Our goal is to enable all life situations with this digital ID” — Mykhailo Fedorov, Ukraine’s Minister of Digital Transformation

Speaking in the same panel discussion, Ukraine’s Minister of Digital Transformation Mykhailo Fedorov said that his government’s goal was to create a digital digital ID system that within three years would make Ukraine the most convenient State in the world by operating like a digital service provider.

“[Ukraine] President Zelensky has tasked our ministry within three years to create one of the most convenient States in the world in terms of the State as a service provider,” said Fedorov.

He added, “The Ukrainian Parliament has also adopted a draft law making us one of the first countries to legalize digital passports, which means we have fully put an ‘equal sign’ between plastic or paper passports and IDs and digital IDs, and now they’re accessible in all life situations.”

“People have no choice but to trust technology” — Mykhailo Fedorov, Ukraine’s Minister of Digital Transformation

When it comes to winning trust in government-run digital identity schemes, Fedorov believes that if you give the people an overwhelming amount of convenience that is accompanied by strong cybersecurity, then they will have no choice but to trust the technology.

“The pandemic has accelerated our progress. First of all, people are really now demanding digital, online services. People have no choice but to trust technology. We see what kind of business is developing, and this business is influencing the development of our services.”

“We have to make a product that is so convenient that a person will be able to disrupt their stereotypes, to breakthrough from their fears, and start using a government-made application” — Mykhailo Fedorov, Ukraine’s Minister of Digital Transformation

“We believe that we have to make the best product possible, a high quality product, a product that is so convenient that a person will be able to disrupt their stereotypes, to breakthrough from their fears, and start using a government-made application,” said Fedorov.

“When we allow a person to register a business in three clicks; when we allow them to pay their taxes in two clicks — no matter how skeptical a person is about the technology, they will start using our services.”

“Our goal is to enable all life situations with this digital ID,” he added.

“The technical part is the easy part. What is really confounding is the governance” — Don Thibeau, Executive Director at the OpenID Foundation

“It allows that citizen to grow businesses and participate in the economy in a much more efficient way,” he added.

Getting the technology right is only half the battle, according to Thibeau. The other is trust in governance.

“If we get the technology right, that’s only the sound of one hand clapping,” he said, adding, “We have to make sure that that we have the technology tools and the governance rules, whether they be in regulation and legislation.

“We have to align the tools and rules in order to scale identity systems in a safe, secure, and privacy-protecting way.”

He added, “In some respects, and one of the key takeaways is, is the technical part is the easy part. What is really confounding is the governance.

“And with governance, we have a new set of options — new tools that come to us through distributed ledger and blockchain technologies, new ways of securing the data about us, and at the same time, making it available for all these exciting new applications.”

“We have yet to create an ID system that’s easy to use, and that’s the paramount driver of adoption” — Don Thibeau, Executive Director at the Open Identity Foundation

For Thibeau, digital identity hesitancy due to a lack of trust in government can be overcome in part by giving people more control over their data with technology that is proven to be safe, secure, reliable, and easy-to-use.

“It comes as no surprise to this audience that the US is experiencing a crisis of trust — the trust that citizens have in their government. What’s holding us back is, I think, that fundamental notion,” he said.

“We have yet to create an ID system that’s easy to use, and that’s the paramount driver of adoption. Underlying that is the notion of security.

“We want the user to be able to act on their own behalf — to be able to interact with government institutions, business institutions, and others on a global basis, but to do so with the use of their data under their control” — Don Thibeau, Executive Director at the Open Identity Foundation

“If we do the job right, we just assume that it’s there. We assume that that technology will be reliable and offering a repeatable experience to the user.

“And as the user has that repeatable experience, that trust grows.”

According to Thibeau, user experience, data control, and cybersecurity will be key factors in winning trust.

“This is not just an ideal. It’s fundamental to creating the trust that we’ve all spoken about, and that user experience is really the platform for that creation of trust.”

As far as personal convenience goes, having a digital identity that consolidates everything into one place can be a godsend in that you can use your digital identity for a variety of goods and services wherever you go, and all of your data can be secured on the blockchain.

But, like with any technology, trust comes from knowing how it’s used, and knowing who benefits the most from the people who use it.

It’s very clear that while they try to identify a problem and try to justify their supposed solutions with it, the purported solutions are not directly addressing the problem for good.

The solutions that they are discussing are addressing a different problem altogether, and that problem is how to perpetually monitor and control the population.

If the problem is the inherent limitations of conventional healthcare in the honest ending of a global pandemic, then why not release the long proven longevity technologies like electromagnetic therapies instead?

Why focus on contact tracing, when you can destroy any viruses in situ on demand and in real time?