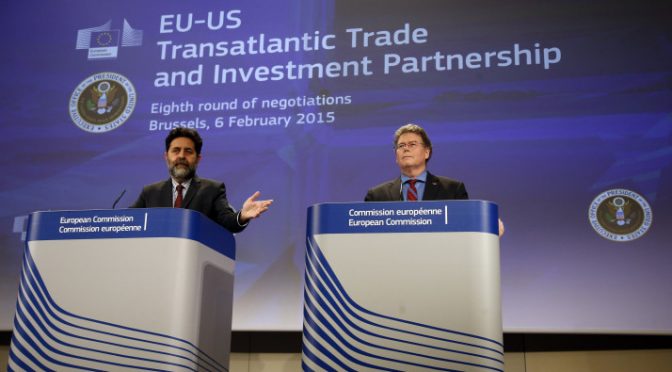 When the creation of the Federal Reserve was being planned and implemented it was all done in total secrecy, and we can forgive ourselves for not knowing all of the facts then because there was no mechanism such as big and pervasive as the internet.
But now that we do, we don’t really have any valid excuse why we are not doing anything to stop the TTIP.

While the majority are all wallowing in debts and barely surviving in a deteriorating quality of life, the Corporate Rats are negotiating behind closed doors so they could squeeze our necks even tighter and bleed us for more.
TTIP will create a new world order where the Corporation no longer work from the background in terms of governance, but its true face will be shown right at the forefront of our daily lives. What that means is that fascism in the United States and the entire Western continents can only get worse.
We cannot allow anymore invasions to our dignity in any form whatsoever. TTIP and all its proponents must be shut down now!

As the EU Foreign Affairs Council re-starts discussions on Thursday on the trade and investment partnership with the United States (TTIP), a senior UN official has dubbed the talks undemocratic and secretive.

The controversial TTIP agreement has been pushed through by US President Barack Obama, who has called for the negotiations for the world’s biggest trade agreement to be speeded up. As the talks get underway in Brussels on May 7, the Independent Expert on the promotion of a democratic and equitable international order, Alfred de Zayas, expressed deep concerns over the talks.

Trade Council this morning. Will discuss state of play TTIP, our new proposals for reformed investment court and Doha negotiations.

Speaking ahead of the meeting, de Zayas said: “I am concerned about the secrecy surrounding negotiations for trade treaties, which have excluded key stakeholder groups from the process, including labor unions, environmental protection groups, food-safety movements and health professionals.
“Proactive disclosure by governments, genuine consultation and public participation in decision-making are indispensable to make these agreements democratically legitimate. ‘Fast-tracking’ adoption of such treaties has a detrimental impact on the promotion of a democratic and equitable world order.”
The talks are aimed at securing a comprehensive Transatlantic Trade and Investment Partnership (TTIP) that will be the world’s biggest ever bilateral trade and investment deal.

US-EU Trade Deal May Cost Europe Jobs
The EU and the US already trade goods and services worth $2.3 billion (€2 bn) on a daily basis, but the TTIP would create further growth and new opportunities by eliminating red tape and tariffs wherever possible to reduce costs and open up new markets.
Multinationals Will Dominate Government
However, critics say the TTIP will pave the way for huge multinationals to have more controlling powers than governments.
According to the Gala Foundation, the TTIP’s regulatory harmonisations will ignite a “race to the bottom” of environmental regulations in the EU, so that they come to resemble the USA’s far weaker regulatory system.

Don’t forget to vote & don’t forget that #TTIP is a huge threat to what our elected representatives are able to do. pic.twitter.com/TCq5SrDyeb

Many analysts agree that TTIP is a trojan horse for big food corporations aiming to avoid food safety regulations and undermine sustainable agricultural practices in their rush for profits and trade.
Global Justice now said:
“For the first time on a grand scale, corporations would be able to sue governments if they make public policy decisions which could harm their future profits. Regulation which currently protects people, public services and the environment could be removed.”
Sputnik

Break the silence on the danger of the TTIP

Why are the media almost silent about the Transatlantic Trade and Investment Partnership being negotiated by the EU and the US? The TTIP represents a massive attack on the sovereignty of democratically elected governments; it will be irreversible. Attempts to harmonise standards between the EU and the US are likely to hit hard-won protections on food and chemical safety (eg in cosmetics, insecticides and pesticides), the environment, and workers’ rights. US agribusiness is pressing hard for Europe to import currently illegal GM products, and meat that does not conform to EU standards, such as chlorine-washed chicken and cattle raised with growth hormones.
The threat of litigation against states which pass laws in the public interest that could impact on corporation profits is particularly insidious. Already, Quebec is being sued for deciding to ban fracking, and tobacco company Philip Morris is suing the Australian government for trying to protect public health by legislation on the marketing of cigarettes. Germany is being sued because of its policies on nuclear power; Slovakia’s public health system is being challenged by commercial interests. Such cases could become commonplace, with profits being placed firmly above people, and commercial interests overriding national law.
Apparently, Ed Miliband hopes for an NHS opt-out clause, but it is doubtful the EU would make this a high priority in talks. We hope that all our political leaders agree that it should be democratically elected governments that decide what services should be publicly owned and managed, in the public interest, not international corporations.
Neville Grant
London