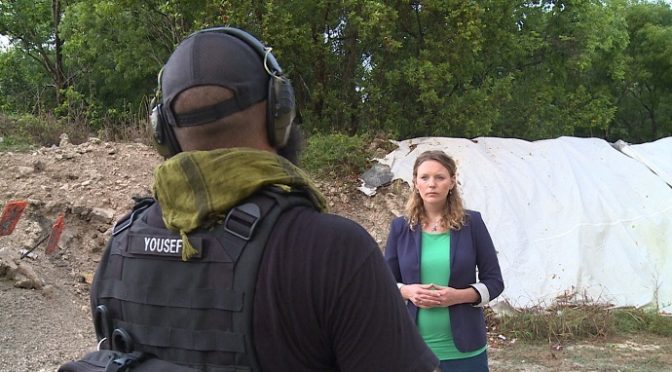 As early as 2009, the notorious BlackWater mercenary group has set up shop in the former American military base in Luzon, Philippines.
With the advent of ISIS in the region, another “voluntary” mercenary group is heading its way into the islands.

Knowing that ISIS is a creation of the CIA, and BlackWater mercenary groups is linked to Dick Cheney, any private military operation in this country is designed to inject terror anytime they deem fit.
The government is still being held hostage by imperial powers. It’s no wonder why China has to act aggressively in the Spratly.

‘Bigger and badder’: US volunteers head to fight ISIS

A group of US volunteers is headed to the Philippines on a contract to fight groups allied with the Islamic State. One counterinsurgency specialist wonders if their enthusiasm will make up for the lack of logistics, weapons and training.
Those in the group have day jobs and regular lives but feel the need to help people endangered by militants who have pledged loyalty to the self-proclaimed Islamic State (IS, formerly ISIS/ISIL), a group in southern Florida told RT’s Maria Finoshina.


They are led by Suleiman Yousef, a professional martial artist and firearms instructor who said he once trained with the mercenary outfit Blackwater. A Muslim himself, Yousef is no stranger to fighting Islamic militants. A tattoo on his neck proclaims, “Cut here.”
“They’re hurting kids, they’re hurting innocent people,” he says. “And they’re saying it’s in the name of Islam. It doesn’t work that way.”

Yousef and his teammates did not wish to reveal who hired them, but said they were paid “overhead.” Asked about their destination, he explains that the Philippines may not be in the headlines but that people there still had a problem with IS-affiliated fighters.
“There’s always a bigger and badder person. Right now we’re going to be that bigger and badder person,” he says. “We need to do what we can with what we know, and do it for the greater good.”
READ MORE: ‘They’ll be dead in a week’: Veterans question experience of ex-army anti-ISIS squad
Though the Florida group has access to customized infantry weapons, US Marine Corps veteran-turned-military-scholar Jake Diliberto told RT it was a bad idea for people to go off to fight the IS on their own. Americans who seek to fight terrorists overseas would be better off enlisting in the military, he said, or joining mercenary and contractor outfits the likes of Blackwater.
“Those that choose to go independently actually have a tendency to create more havoc and more problems in the conflict zone than an organized military or defensive contracting company,” said Diliberto, a veteran of the wars in Afghanistan and Iraq.


Volunteers are driven partly by empathy for the victims shown on the TV screens and partly by fear and anxiety that the violence taking place overseas could come home to America, Diliberto explained. “There is a need by some sort of more zealous, defensive Americans to protect their homeland against this kind of perceived threat,” he said.
“For the most part, ISIS isn’t interested in attacking the US,” Diliberto added. “They are interested in Raqqa, they are interested in northern Iraq. They are not interested in coming to New York City or Topeka, Kansas.”
RT

MANILA, Philippines?An investigative report circulating online said the American military contractor Blackwater was training ?mercenaries? of various nationalities, including Filipinos, at the Subic free port in Olongapo City.
Subic Bay Metropolitan Authority (SBMA) Administrator Armand Arreza, however, quickly denied the story.
In a video story posted August 28 on the Russia Today website, American investigative journalist Wayne Madsen claimed Satelles Solutions, a Blackwater subsidiary, was using a five-acre facility in the former United States naval base to train operatives for secret US-backed military operations in Iraq, Afghanistan and other hot spots.
Blackwater, founded by a former US Navy Seal in North Carolina, has been denounced in some US media as being America?s ?private army.? It does jobs for the US Central Intelligence Agency (CIA).
Interviewed on Russia Today, Madsen asked: ?Who gave them permission? Apparently it?s against the Philippine Constitution to station foreign troops in the country … someone is running around the Constitution of the Philippines. Obviously this is done with the permission of the president of the Philippines,? Madsen said.
He claimed the country was now a ?major operating base? for the Blackwater subsidiary.
Madsen alleged the Subic facility could train up to 1,000 operatives. He also claimed that other US companies linked to former US Vice President Dick Cheney had also opened a shooting range at the former Clark Air Base.
In 2007, Blackwater denied it was opening a facility in the Philippines. ?We are no longer pursuing a facility in the Philippines,? Anne Tyrrell, a company spokesperson, had said.
Madsen?s report indicates the company went ahead using a subsidiary company.
In a phone interview with the Philippine Daily Inquirer, Arreza denied Blackwater was maintaining any kind of facility in the SBMA.
?There is no facility for any military training by Blackwater or any such company,? Arreza said.
The only facility for any kind of military-style training here is the Philippine National Police Leadership School, he said.
He admitted that Blackwater submitted a proposal to set up a training facility in Subic three years ago.
?But this request never materialized. We want to develop the SBMA for commercial and industrial uses. We felt that the request (of Blackwater) went against our charter.?
He also said he was willing to open the facility to inspection or investigation. ?There are no restrictions here. Anyone can enter the SBMA.?
Inquirer

One thought on “Why U.S. Mercenaries are in the Philippines?”