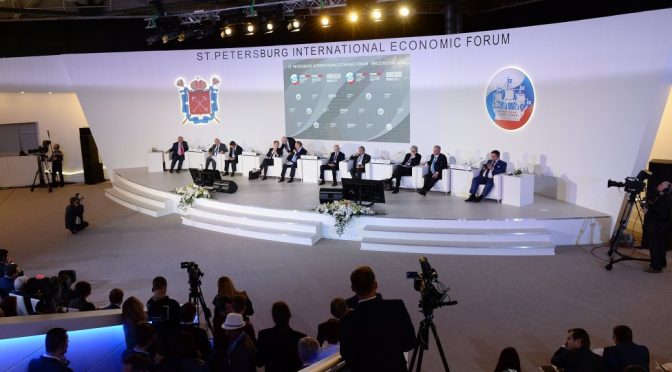 Undeterred by the huge ruckus about the European storm, BRICS working committees continue to work and hold various coordinative meetings in Russia which is now hosting these annual meetups.

Among the areas being considered are:

The BRICS organization’s goal is to make the whole economy more equitable than the present, and to depart from the outmoded concept of having an enemy image to unite the Sheeples.

05:03 07.07.2015
MOSCOW (Sputnik), Alexander Mosesov — Ahead of the meeting, simultaneous meetings of the five Working Groups on Infrastructure, Manufacturing, Financial Services, Energy and Green Economy, and Skills Development were held.
Also, meetings of two new groups, the Agricultural Cooperation Working Group and the Working Group for Eliminating Administrative Barriers and Improving the Investment Climate were held for the first time.
Working Groups Discussions
The meeting of the BRICS Business Councils consisted of the welcoming speeches given by the five chairmen of national chapters, including the Russian Chapter Chairman, Andrey Katyrin, who coordinated the meeting, and the reports by the representatives of the working groups.
The Working Group on Infrastructure concentrated on physical connectivity of BRICS countries, the New Development Bank, as well as on the scientific cooperation in the sphere of infrastructure.
The Manufacturing Working Group’s representative spoke of non-tariff barriers and free trade practices, and the Financial Services Working Group focused on the initialization processes of the New Development Bank and strengthening investment ties between BRICS countries.
The Energy and the Green Economy Working Group focused on the security, affordability and sustainability of the energy supply, while the Agricultural Cooperation and the Skills Development Working Groups’ representatives spoke of the need to enhance the innovation and high-technological processes in BRICS countries.
The idea to create a BRICS Rating Agency was also brought up at the meeting.
All participants of the meeting expressed their content with the work done and stressed the need to carry on with joint work and dialogue between the five countries.
Established in 2013, the BRICS Business Council serves as a platform for boosting economic, trade, business and investment ties among the five member states’ business communities.
The heads of the council’s working groups report on the results of their cooperation throughout the year and outline future plans and areas of collaboration.
Following the BRICS Business Council, delegations from Brazil, Russia, India, China and South Africa will head to the Russian city of Ufa for the 7th BRICS Summit on July 8-9.
Sputnik

BRICS are discussing terms of a free trade zone agreement although the bloc is not ready to “rush events” yet, top Russian officials said on Monday.
“We are already discussing the terms of the agreement regime… The correct decision is we do not rush events and not grind out an agreement on free trade zone now,” Russia’s First Deputy Economic Development Minister Alexei Likhachev told Russian agency Tass.
The Russian Minister claimed “it can happen within five years”.
A BRICS free trade zone would be a significant step further in boosting commerce between the rising powers. It would create a uniform economic zone for more than 2.8 billion consumers and eliminate many of the hurdles that obstruct trade across the five countries today.
Between 2002 and 2012, intra-BRICS trade increased 922 per cent, according to official statistics.
Negotiations for an ambitious free trade zone between Brazil, Russia, India, China and South Africa would be challenging as most of these countries have been accused by the Global Trade Alert (GTA) as adopting strident protectionist measures.
The EU and the US are also in the midst of long-drawn out negotiations on the Trans-Atlantic Trade and Investment Partnership or TTIP, which Washington claims would create the world’s biggest free trade zone.
Meanwhile, Moscow is aggressively pushing for the newly-proposed BRICS free trade zone.
“At first it will be a declarative document that will inspire our countries to cooperate more actively. Then it could be non-preferential agreements, which optimize regulatory system, simplify customs and investment procedures, create the so-called “green corridors” for goods. The third phase is a preferential regime – concessions that we will make in terms of commodity trade,” Likhachev said on Monday.
BRICS countries account for 42 per cent of the world population.
The IMF says the combined GDP (by purchasing power parity) of the BRICS countries is $32.5 trillion.
Leaders from the five countries, Vladimir Putin, Xi Jinping, Dilma Rousseff, Jacob Zuma and Narendra Modi will meet in the Russian city of Ufa from 8-9 July to discuss a future roadmap for trade and investment ties within the BRICS.
The leaders will also launch the New Development Bank and a $100 billion BRICS contingency reserve fund.
TBP

Russia and China on Monday pledged to settle more bilateral trade in ruble and yuan with central banks of the two countries set to sign a financial agreement, reducing the role of the dollar in international trade.

The 6th China-Russia Finance Ministers dialogue is being held in Moscow.
Russian Finance Minister Anton Siluanov and his Chinese counterpart Lou Jiwei discussed bilateral cooperation as well as the upcoming BRICS Summit on Monday.
“We have actually reached a final stage of preparing this document. I believe we’ll be able to sign it in the coming days. The memorandum deals with such issues as making settlements in national currencies, stimulating access to internal markets and so on,” said Siluanov.
Chinese Finance Minister Lou Jiwei said the BRICS Bank and the Asian Infrastructure Investment Bank will aid in injecting new vigor to Russian-Chinese bilateral ties.
The third biggest shareholder of the new China-led Asian Infrastructure Investment Bank, Russia, last week approved the articles of association of the new lender. Russia owns 65,362 shares of the bank.
“Russia and China are the founding countries of the AIIB and are also investors of the BRICS Development Bank. We can use these two mechanisms, two structures for promoting Russian-Chinese bilateral and surely multilateral cooperation [with the participation of Russia and China],” said Lou in Moscow on Monday.
US and European governments have slapped sanctions on Russia for its alleged backing of separatist rebels in Ukraine.
Russia denies the allegations.
Washington and Brussels have excluded Russia’s state banks and top energy firms from capital markets.
Meanwhile, overtaking the Canadian dollar and the Australian dollar, China’s yuan has become the world’s fifth most widely used payments currency, according to the Society for Worldwide Interbank Financial Telecommunication (SWIFT).
The value of cross-border deals settled in the Chinese currency, yuan, more than doubled in 2014, shows new data from SWIFT in January this year.
China’s policy makers are seeking to boost the currency’s convertibility and global use.
The yuan reached a record high share of 2.17 per cent in global payments by value in 2014.
The U.S. dollar, euro and British pound remain the top three world payment currencies.
The yuan surpassed the euro in 2013 to become the second-most used currency in global trade finance.
The Chinese currency is already traded directly against the US dollar, the euro, the Japanese yen, the British pound, the Aussie and New Zealand dollars, Russia’s rouble, the Singapore dollar and Malaysia’s ringgit.
TBP
One of the significant sources of funds for the fascist Nazionist Jesuit Khazarian Mafia is the healthcare industry which registered a whopping $3.09 trillion in 2014, and is projected to soar to $3.57 trillion in 2017, in the US alone.
We can help take down the Dark Cabal by avoiding drugs, defeat any viral attack and scaremongering easily by knowing how to build our own comprehensive antiviral system. Find more about it here.

2 thoughts on “BRICS Continue to Create A Parallel Economic System”