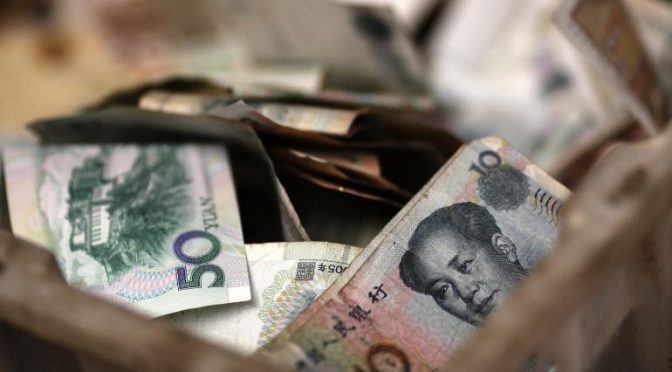 After reassuring the United States that its economy will be propped up by China, Obama has given his thumbs up to the inclusion of Renminbi into the IMF’s SDR basket of currencies.
Renminbi is the official “people’s currency” of China; Yuan is the primary unit of that currency.

This will pave the way for the exclusion of the fiat dollar from the global financial system in the coming days.
Of course, there are other covert arrangements which led us to conclude that the East is only really aiming for a peaceful “win-win” resolution of all conflicts with the West, and that the best they, i.e. the Reformists, could do for the time being is to initiate an “all-inclusive economic system”, and it is up to us to exploit and maximize that scenario where “no one is left behind.”
Earlier, the White House was also trying to raise the stakes using the cybersecurity and hacking issue which both countries are guilty of doing, and to which China has effectively downplayed by talking to the tech companies first before with anybody else.
After extended bargaining, both parties have reached an understanding on cybertheft issue, among others.

Andrew Mayeda
The Obama administration took a step toward backing China’s bid to have the yuan recognized as a global reserve currency, as the U.S. softened its insistence that the Chinese implement financial reforms to win support.
The International Monetary Fund is reviewing whether the yuan should be included in its Special Drawing Rights, a basket of reserve currencies used by the lender as a unit of account. After U.S. President Barack Obama and Chinese President Xi Jinping met Friday in Washington, the two sides issued a statement saying the U.S. supports the inclusion of the yuan “provided the currency meets the IMF’s existing criteria in its SDR review,” a point Xi highlighted in his press conference with Obama.
The shift in the U.S. position follows the administration’s failed attempt to prevent allies from joining the China-led Asian Infrastructure Investment Bank earlier this year, a strategy that was faulted by former policy makers including ex-Treasury Secretary Henry Paulson.
In June, a joint statement by the two countries said the U.S. “supports China making the reforms that would lead to the inclusion” of the yuan in the basket. Friday’s statement mentions U.S. support for “China’s commitment to implement further financial and capital market reforms.” The new language clarified to the Chinese that the IMF’s assessment of whether the yuan meets the fund’s SDR criteria will be the determining factor for American support, said an administration official who asked not to be identified.
Winning the IMF’s endorsement would validate efforts by Xi to push through policies aimed at making the world’s second-biggest economy more market-oriented, boosting China’s prestige as it prepares to host Group of 20 gatherings next year. At least $1 trillion of global reserves will convert to Chinese assets if the yuan joins the IMF’s reserve basket, according to Standard Chartered Plc and AXA Investment Managers.
“The train delivering the SDR to President Xi in time for the November 2016 G-20 Summit in Hangzhou remains on schedule,” said David Loevinger, managing director of emerging-markets sovereign research at asset manager TCW Group Inc. in Los Angeles. There’s “plenty of wiggle room” within the IMF criteria to allow China to meet the fund’s requirements, said Loevinger, a former senior coordinator of China affairs at the U.S. Treasury.
The IMF’s executive board will make a decision on the yuan reserve-currency issue as soon as November. Approval requires 70 percent of the fund’s voting shares, and even if the U.S. opposed the move, the nation would need several allies because the U.S. has about 17 percent of votes. Many analysts have been predicting approval.
The U.S. and China also look forward to continuing to discuss methods to facilitate yuan trading and clearing in the U.S., according to the joint statement.
U.S. Treasury Secretary Jacob J. Lew in previous comments this year has put the onus on China to prove the yuan belongs, saying the country needs to further liberalize its currency policy and complete financial reforms before it can get the IMF’s nod.
Friday’s shift brings the U.S. closer to the positions of the U.K. and France. In a speech Tuesday in Shanghai, U.K. Chancellor of the Exchequer George Osborne said he’d like to see the yuan added to the IMF basket as the currency becomes increasingly important in global markets and “meets existing IMF criteria.”
French Finance Minister Michel Sapin said last week in Beijing that France favors including the yuan in the SDR basket, though China still needs to meet the IMF’s technical requirements first, according to Francois Coen, Sapin’s spokesman.
bloomberg.com

Without Ex-Im, Boeing Still Managed to Sell 300 Planes to China

National Review
That order, by the way, is the largest ever order by a single country. Way to go, Boeing! ​But as Markay notes, “This can’t be right. There’s no Ex-Im bank around to finance the deal,” and we know that according to Boeing and GE, without Ex-Im the export world is going to hell in a hand basket.
Not to worry, though — the pro-Ex-Im crowd has found a way to explain why this purchase from China is all about the bank’s expiring after all. You see, at the same time as the sale was announced, it was also made public that Boeing would be building its first assembly line in China. From now on, Boeing will be making some of its planes in China, and not just in Washington State. As such, and right on cue, pro-Ex-Im advocate Loren Thompson tells us that “it appears the uncertain fate of the U.S. Export-Import Bank figured in the decision to establish offshore production.” ​
Good try, Loren, but we are not buying. From what I have read in the last few days, the move is mostly the product of China’s fast growth, its emerging middle class, and a rise in air-travel in the country.
In fact, Boeing is following the steps of its European competitor, Airbus, which, in spite of not having lost its credit agency, built an assembly line in China in 2008 and expanded it in 2014.
From the New York Times:
China accounted for roughly a quarter of Boeing’s single-aisle jet deliveries this year and is expected to claim a large share of future orders. But the company has lost ground in recent years to Airbus, which delivered the first of its rival A320 jets from an assembly plant in Tianjin in 2009.
Here is the Yahoo story:
The state-owned Commercial Aircraft Corporation of China (COMAC) also reached an agreement with Boeing to set up a “completion centre” in China for its narrow-body 737 airliners, Xinhua said. It represents a step-up in Boeing’s competition in China with European rival Airbus, which already has a manufacturing presence there.
Please, reporters, take note that Boeing has announced that it won’t hurt U.S. employment:
The assembly plant would be Boeing’s first in China and signals its attempt to match its European rival Airbus’s Chinese presence as the two rivals step up their efforts to win more business in the country’s lucrative aircraft market. Boeing said the Chinese facility won’t reduce employment levels at its plants in Washington state.
According to U.S.A Today, there will be plenty more orders in the future:
Boeing has projected it could sell China 6,330 planes worth $950 billion during the next 20 years. Nearly three-quarters of the planes will be single-aisle with about 700 wide bodies. Passenger traffic is projected to grow 6.6% per year during that time and air cargo 7%.
Can one say with a straight face that if Ex-Im were still around, Boeing would not be opening this factory in China? Of course one can’t. The market forces and competitive pressures in that industry would have required some presence in China for Boeing to remain competitive, with or without Ex-Im. This is why the still-heavily-subsidized Airbus made the move East a few years ago. Boeing was bound to follow sooner or later, whether U.S. unions like it or not.
But while I will defend Boeing’s right to move its operations abroad for the sake of its bottom line, I will condemn any attempts to use such a move as a means to get more subsidies and to renew the Ex-Im Bank.
This piece, which I co-wrote with the Heritage Foundation’s Diane Katz in The Hill, debunks the claim that Boeing lost a satellite sale because and only because Ex-Im was shut down down on June 30th. A tidbit:
The more plausible explanation for the looming layoffs involves fewer satellite and other defense-related orders from the government. The Tauri Group, which compiles an annual report on the satellite industry, noted slower growth in 2014 “due to a smaller number of expensive commercial GEO and government satellites.”
The satellite manufacturing industry posted a measly 1 percent growth globally between 2013 and 2014, and U.S. satellite manufacturing revenues (as measured by 2014 launches) dropped 9 percent in the same period. Job losses exceeded 10,000.
The timing of the ABS order cancelation is also worth noting. ABS announced the satellite order—its third from Boeing—on June 12, 2015. That was just 18 days before the Ex-Im charter was set to expire. It is hard to imagine that the two companies did not recognize the likelihood that Ex-Im financing was in jeopardy. Yet they went public with the deal nonetheless. That would seem to indicate a certain confidence that financing was not a deal-breaker.
Another June event was likely significant—the explosion of a Falcon 9 satellite launcher on June 28. Following the explosion, SpaceX, the owner of the rocket, informed customers booked to fly on upcoming launches to expect months-long delays. These delays will further extend the time it would take for ABS to begin generating revenue from a new satellite. Because the new satellite was to feature all-electric propulsion—rather than conventional rocket propulsion—the time to reach proper orbit would also take weeks longer.
I also have a piece over at Creators debunking GE’s claims that it is forced to “move” jobs to France because, and only because of the loss of Ex-Im.
nationalreview.com
There are also persistent noises about “helicopter money” that should be done to help the unemployed and revitalize the economy on top of the impending global debt jubilee that’s been marketed as the “Year of Mercy”.
What the Vatican is doing is always designed to fool the people to keep itself in power, via grandstanding when it has no right to, instead of asking for forgiveness for all the evil things the House of Lucifer has done.
The Year of Mercy should be rebranded as the “Year of Atonement” if we are to believe all the Papal BS at the UN just recently.