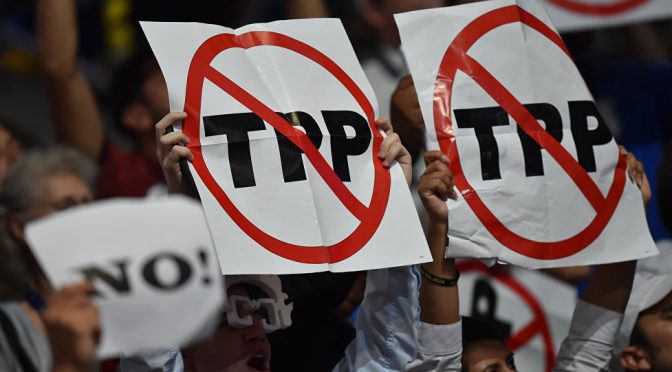 So far, the newly inaugurated Trump administration is doing as expected. The White House has just signed an EO withdrawing from TPP Trade Deal, and it is now sharing intelligence information regarding the specific locations of Daesh terrorists in Syria.
The Trans-Pacific Partnership free trade agreement is now officially dead, and the fate of the remaining Daesh terrorists in Syria will now be determined by the peace talks in Astana.

Sputnik 19:46 23.01.2017(updated 20:52 23.01.2017)
“We got to sign three memorandums today. Right now, to withdraw the United States from the Trans-Pacific Partnership,” White House Chief of Staff Reince Priebus announced on Monday presenting Trump with the order to be signed.
On Friday, the White House released a trade plan saying that the United States would withdraw from the Trans-Pacific Partnership (TPP) free trade agreement.
“Everyone knows what that means, we have been talking about this for a long time,” Trump noted while signing the order. “Great thing for the American worker, what we just did.”
During his presidential campaign, Trump often criticized the TPP agreement and called it a “terrible deal,” which is harmful for US workers. He has vowed to withdraw the United States from the deal within the first 100 days of his presidency and impose tariffs on products from China.
The TPP free trade deal, covering 40 percent of the global economy, was signed last February by Australia, Brunei, Canada, Chile, Japan, Malaysia, Mexico, New Zealand, Peru, Singapore, Vietnam, and the United States.
China has been promoting a rival free trade pact in the Asia-Pacific region, the so-called Free Trade Area of the Asia-Pacific pact (FTAAP).

Trump administration has today formally announced US withdrawal from #TPP. How did this all start? #TPP draft leaks: https://t.co/16A3lAIzNS

The Daesh terror groups still on the periphery of Syria are now running scared, and will be negotiating with the Syrian government in Astana, at a position of weakness.

Russia Receives Daesh Coordinates in Al-Bab From US

Sputnik 19:50 23.01.2017(updated 20:54 23.01.2017)
The United States has provided coordinates of the terrorists’ targets in the city of Al-Bab in Aleppo province for Russian airstrikes. After the reconaissance check, Russia and two coalition jets have conducted joint airstrikes on the Daesh targets in the region.
“On January 22, the Russian command center at the Hmeymim airbase has received coordinates of Daesh targets in Al-Bab, Aleppo province, via the ‘direct line’ from the US-led coalition headquarters. After further data verification with the assistance of unmanned aircraft and space reconaissance, the Russian Aerospace Forces and two jets of the international coalition have conducted airstrikes on the terrorists’ targets,” the statement said.
As a result, several ammunition depots, military hardware and fuel products were destroyed.
Earlier, Russian and Turkish combat planes have carried out a new series of joint airstrikes against Daesh targets in war-torn Syria, the Russian Defense Ministry said on Monday.
“The Russian and Turkish planes carried out joint airstrikes against Islamic State terrorists in the outskirts of the town of al-Bab in Aleppo province on January 21,” the ministry said in a statement.
According to the statement, the missions involved three Russian planes, including two Su-24M and a Su-34 aircraft, and four Turkish planes, including two F-16 and two F-4 fighter-bombers.
The news comes amid a nationwide ceasefire in Syria backed by Russia and Turkey which came into effect on December 30 and was later supported by a UN Security Council resolution.
Turkey is currently conducting an operation in Syria dubbed Euphrates Shield. On August 24, Turkish forces, supported by Free Syrian Army rebels and US-led coalition aircraft, began a military operation dubbed the Euphrates Shield to clear the Syrian border town of Jarabulus and the surrounding area from Daesh terrorist group. As Jarabulus was retaken, the joint forces of Ankara, the coalition and Syrian rebels continued the operation to gain control over Al-Bab in the Aleppo province.
Al-Bab is one of Daesh’s last remaining strongholds near the Turkish border. Capturing the city is of strategic importance to Turkey in order to prevent the Syrian Kurds taking it and unifying their own territories.

There are also some indications that the Trump administration will finally end the decades of government suppression against exotic technologies. This is very evident in his inaugural speech, 4 days ago.

“We stand at the birth of a new millennium, ready to unlock the mysteries of space, to free the earth from the miseries of disease, and to harness the energies, industries and technologies of tomorrow.”

The various space age technologies, e.g. free energy, anti-gravity, cell regeneration, that have been under lock and key for more than a century are probably his inspiration for the “Make America Great Again” campaign slogan.
If that is the case, then the next 4 years would be the most exciting period in our lifetime.
So, buckle up, ’cause it’s more than just a ride!