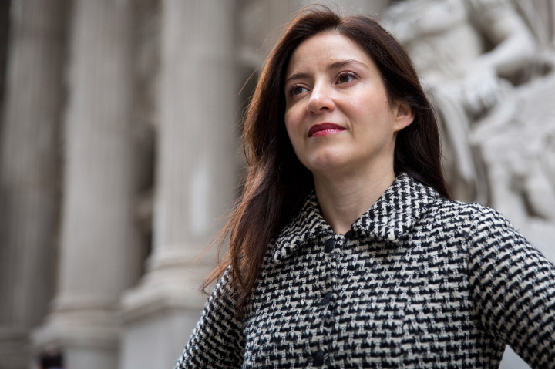 This is not a “conspiracy theory” anymore. A direct witness to the crime has come forth with recorded evidence to support her claim of collusion between the “regulator” and the banker, i.e. the Fed and Goldman Sachs.
Unimpeachable witness publicly releasing unimpeachable evidence should send somebody to jail.

“Ira introduces Carmen Segarra, a bank examiner for the Federal Reserve in New York who, in 2012, started secretly recording as she and her colleagues went about regulating one of the most powerful financial institutions in the country. This was during a time when the New York Fed was trying to become a stronger regulator, so that it wouldn’t fail to miss another financial crisis like it did with the meltdown in 2008. As part of that effort to reform, the Fed had commissioned a highly confidential report, written by Columbia professor David Beim, that identified why the regulator failed in the years leading up to the crisis. Beim laid out specific recommendations for how the Fed could fix its problems. Carmen’s recordings allow us to see if the Fed successfully heeded those recommendations more than two years later. What we hear is not reassuring.

ProPublica‘s Jake Bernstein tells the story of Carmen’s first months at the New York Fed, and how she came to start recording. And we hear the story of how the Fed examiners respond to an unusual, questionable deal that Goldman Sachs did — a deal that the top Fed guy stationed inside Goldman calls “legal but shady.”

We hear what the New York Fed and Goldman Sachs say about all this. We hear a Goldman Sachs supervisor tell Carmen Segarra how an examiner should talk and act to be successful at the Fed. And we hear what happens to Carmen when she does exactly what David Beim’s confidential report told the Fed it needed to encourage its examiners to do in order to spot the next financial crisis.
In the course of reporting our story with ProPublica, we sent lots of questions to the New York Fed and Goldman Sachs. We wanted to share those with you, along with the institutions’ responses.
Our questions to the New York Fed are here.
The New York Fed responded with a statement and later this email.
Our questions to Goldman Sachs are here.
Goldman Sachs’ response is here.
And one last document that plays an important role in our story: the confidential report Columbia professor David Beim wrote for the New York Fed in 2009, as it was trying to figure out why it failed to anticipate the financial crisis and what it should do to make sure it wouldn’t fail to catch the next one.
Here is a transcript of the full episode.”
source »

Would you like to like to have your own eClinik at home?
With this eBook, you can easily defeat cancer, AIDS and help your body cure all known and unknown illnesses without using drugs, at the comfort of your own home. This is our experience. Find out more about it here.
Every download of our eBook, Towards Healthcare Emancipation – Premium Edition, provides additional funding to our next project.
If you haven’t done so, please like our FB page to encourage others to learn more about our work.
Thank you very much for your valuable support. Mabuhay!

Wall Street is about to be rocked by secretly recorded audio tapes that purport to show a too-cozy relationship between the New York Federal Reserve Bank and the financial institutions it is supposed to regulate.
The 45 hours of tapes, made by Carmen Segarra, a former NY Fed worker, capture former co-workers, whose job was to keep banks like Goldman Sachs in line, instead deferring to the banks, being unwilling to take action and being extremely passive, according to public radio’s “This American Life,” and ProPublica which obtained the tapes and is scheduled to air a program about the matter Friday night.
Segarra, ironically, was hired by the NY Fed in October 2011 to help toughen up their oversight. She was fired in 2013 after, she claims in a lawsuit, she tried to get Goldman to toe the line on regulations.
The NY Fed has regulators embedded at each of the large banks it oversees. On her first day on the job, Segarra was assigned to Goldman.
The pushback from Goldman started right away. At one of her first meetings, a senior compliance officer at Goldman said certain consumer laws didn’t apply to the bank’s wealthier clients.

“I was shocked,” Segarra tells a reporter for the show, adding that her notes on the meeting had that exact line.Goldman, through a more seasoned Fed regulator also embedded at the Wall Street bank, told Segarra her notes were wrong.
Segarra said they weren’t.
Her more senior colleague asked her to change the notes.
She refused.
That senior colleague would later tell Segarra, according to a transcript of the program, that “credibility at the Fed is about subtleties and about perceptions, as opposed to reality.”
Said Segarra: “I found it to be completely incredible.”
Goldman and the NY Fed, as an answer to her lawsuit, have denied the charges.
David Beim, the Columbia University business professor whose 2009 report on how the NY Fed could improve its oversight of banks — a report which led to Segarra’s hiring — called the ability of banks to co-opt and tame NY Fed workers “regulatory capture.”
Michael Lewis, best-selling author of “Flash Boys: A Wall Street Revolt” and “Liar’s Poker,” said after listening to the tapes: “The Ray Rice video for the financial sector has arrived.”
source »

Here are developments following our report about the New York Fed and Carmen Segarra’s secret recordings: