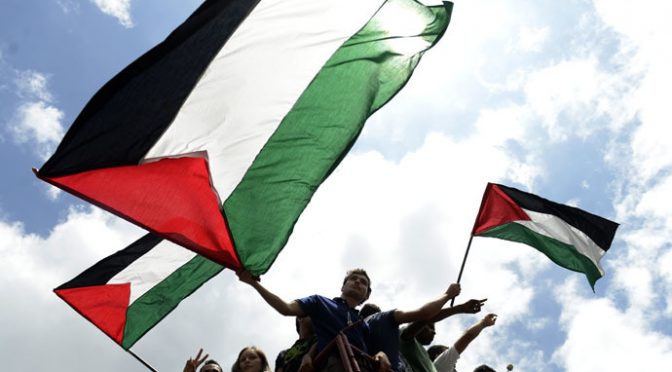 In a sign that Israel is being isolated from the rest of Europe, both Ireland and France have made it official to recognize Palestine as a sovereign state.

Ireland’s lower house of parliament has unanimously approved a non-binding resolution calling on the government to recognize the state of Palestine formally, on the basis of the 1967 borders. French senators also backed the symbolic resolution.
The motion is similar to one passed in October by the upper house, the Seanad. It calls on the government to “officially recognize the State of Palestine, on the basis of the 1967 borders, with East Jerusalem as the capital, as established in UN resolutions, as a further positive contribution to securing a negotiated two-state solution to the Israeli-Palestinian conflict.”
The symbolic measure was sponsored by Sinn Fein, an Irish nationalist party with strong Palestinian links.
“Achieving and recognizing a Palestinian state has always been the objective of the Irish government. Everything we do in the Middle East is directed towards that aim,” Sinn Fein’s Phil Flanagan told a virtually empty parliamentary chamber, with barely a dozen lawmakers present in the 166-seat chamber, AP reported.
“While successive governments have always seen recognition coming as part of an agreed peace, I’ve made it clear that I’ve absolutely no difficulty in principle with the idea of early recognition, if I believe it can contribute to achieving a settlement of the conflict. The present stalemate is not acceptable to me,” Flanagan stated.
READ MORE: Prominent Israelis join petition calling on Europe to recognize Palestine
Ireland has become the latest EU member to approve the motion seeking recognition of Palestinian statehood. On October 30, Sweden was the first Western EU member (and 135th of the world’s 193 nations) to recognize Palestinian statehood officially. Similar nonbinding motions have recently passed the legislatures in the UK, France and Spain.
French Senate votes in favor of Palestinian state
On Thursday French senators voted 154-146 in favor of a non-binding resolution calling on the French government to recognize Palestine. Last week the lower house of the parliament adopted a similar measure by a much larger margin. Israeli Prime Minister Benjamin Netanyahu called the move “irresponsible” and a “grave mistake.”

“Do they have nothing better to do at a time of beheadings across the Middle East, including that of a French citizen?” he told i24news on November 23 in Jerusalem, referring to Herve Gourdel, a French tourist who was executed in Algeria in September by an Algerian jihadist group linked to the Islamic State (IS, formerly ISIS/ISIL) militants.
While Israeli-Palestinian peace efforts are currently in deadlock, the French government advocates a two-state solution. A veto-holding member of the UN Security Council, France is trying to damp down growing anti-Semitism at home, preserving good relations with both the Israeli and Arab governments. The world is divided on Palestine’s status: While most developing countries recognize it as a state, most Western European countries don’t, insisting that an independent Palestinian state may only emerge from direct negotiations. Israel argues that nations that recognize the Palestinian state discourage direct talks.
READ MORE: Palestinian minister dies after run-in with IDF soldiers in West Bank protest
Earlier this month, a Palestinian envoy to the UN said that by the end of December he would submit a first draft of a request to renew peace talks with Israel to the UN Security Council, which will include a set date for establishing a Palestinian state. Riyad Mansour said that the request draft will also set a date by which the Israeli and the Palestinian delegations must come to an agreement, Israel Radio reported.
On November 26, President Mahmoud Abbas stated that he would be ready to set up a Palestinian State on land he says is only 22 percent of the size it should be, the Turkish Anadolu Agency reported.
On November 23, Foreign Minister Riad Malki told the Bethlehem-based Ma’an news agency that the Palestinian Authority had decided to put off its statehood bid at the UN Security Council. This was supposed to take place at the end of November, allegedly because of US pressure and threats, as well as due to the failure of the PA to get the backing of nine Council members in favor of the statehood bid.
source »