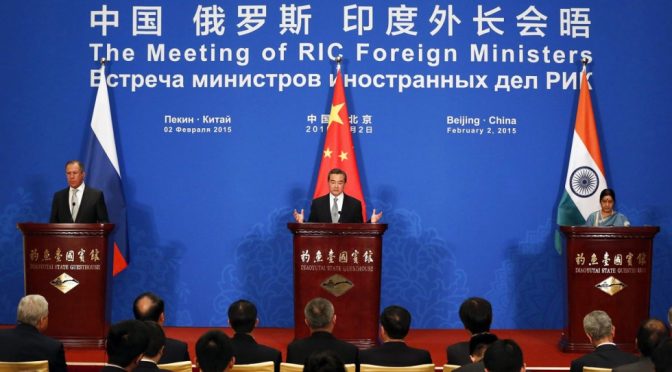 There was a Foreign Ministers’ Meeting between Russia, India and China held a day ago, discussing broad issues, from regional cooperation to global financial reforms.

The significance of these meetings is that these countries are putting forth their money where their mouth is, literally.
They have also expressed strongly on the need to prevent the weaponization of space which should send Dr. Steven Greer, of the Disclosure Project fame, grinning.
As part of the expected protocol, there are also items for the mainstream mindset, e.g. terrorism, Ebola and global warming.
But overall, this meeting, along with others before it, underscores the BRICS strong desire to lead the world into a more cooperative community of independent nations working for their mutual interests and aspirations of a peaceful and prosperous planet of the 21st Century.
This is very evident in the number of multi-lateral, multi-faceted meetings held in just a span of one year, to the point of making Western “advances” in the field of destructive proxy wars pathetically ridiculous.
Somebody need to stop these warmongers for good.
We have highlighted the key points of their joint statement below for your reading pleasure. Enjoy!

3 thoughts on “RIC Continue Pushing for Global Peace and Prosperity”