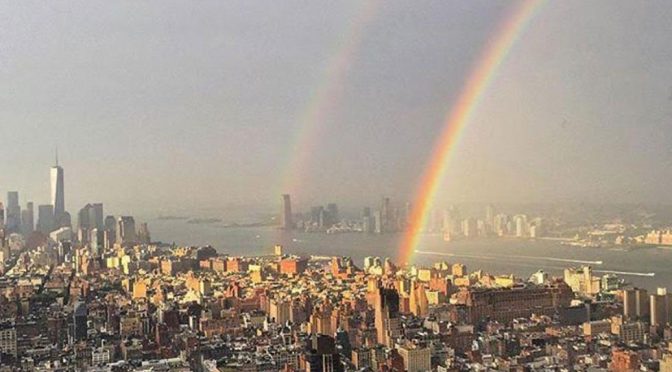 by benjamin
September 15, 2015
The 14th anniversary of 911 may be the last one to pass without the perpetrators of this crime finally seeing justice. There were some very unusual “heavenly” events associated with this anniversary. One was a double rainbow seen in New York

http://www.weather.com/news/news/new-york-city-rainbow-911-anniversary
which appeared at roughly the same time as one (witnessed by this writer) appeared in Tokyo. Even more otherworldly was the fact that a bolt of lightning knocked over a crane in Mecca owned by the BinLaden construction group on 911, killing 107 people.
http://www.dailymail.co.uk/news/article-3231117/At-62-people-dead-crane-collapses-Grand-Mosque-Mecca.html
US spokesperson “acting” president Barack Obama was instructed not to show up at any 911 ceremony but was instead told to go talk to US soldiers. Meanwhile, US Defense Secretary Ash Carter spoke at a Pentagon 911 ceremony where he promised that “no matter how long it takes [the perpetrators of this crime] will not escape the long arm and hard fist of justice…we will find you,” and “we will never forget.”
If the US military are sincere, then George Bush Jr., Donald Rumsfeld and most of the other neo-cons who signed the “Project for a New American Century” document in 2000 will be arrested. That document called for “a New Pearl Harbor” to justify a big invasion of the Middle East.
In any case, it is looking like an end game for the Zionist Nazi Netanyahu regime in Israel as Russian and Iranian troops move in while the Pentagon helps or turns a blind eye. We now have sources that are usually diametrically opposed to each other, the Mossad linked Debka and the Pentagon linked site Veteran’s today, both agreeing that Russian troops are on Israel’s doorstep.
http://www.debka.com/article/24885/Putin%E2%80%99s-offer-to-shield-develop-Israel%E2%80%99s-gas-fields-predated-Russia%E2%80%99s-military-buildup-in-Syria
http://www.veteranstoday.com/2015/09/11/syrian-right-observatory-russians-hit-israelis-on-golan-drive-to-tel-aviv/
The Debka article is revealing when it notes “Israel’s military strength is substantial but no one is looking for a military clash with the Russians,” before concluding Israel should ask for Russian protection. Russian White Dragon Society sources make it clear any Russian protection of Israel will not mean business as usual for that rogue state. Meanwhile, here is what a Pentagon source had to say about Israel: “Israel has been doing cyber-attacks from
continue reading

One thought on “Acts of God, mutual accusations, fear and hope as Zionist nightmare collapses”