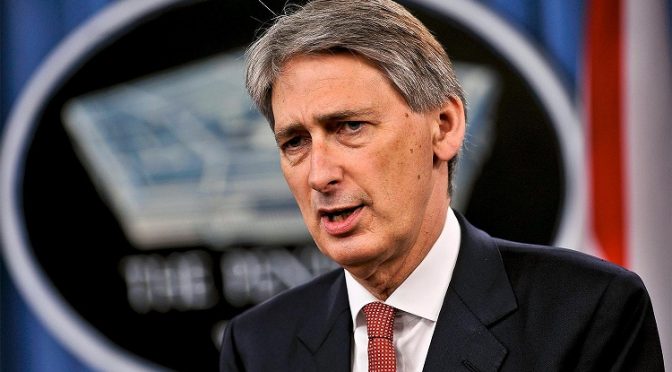 Western governments are now emphasizing it is highly probable that ISIS affiliated Egyptians working as baggage handlers may have planted the bomb that caused the mid-air explosion of Russian flight 9268.
UK has suspended all flights from Egypt for the time being.

Why are both western governments jumping the gun of the Russian investigations on the matter? Is it out of a noble desire to help the Russians?
Or, is it to tell the public not to venture into Egypt anytime soon to hurt the country’s tourism industry?
We suspect this is one of the goals all along. After all, the Egyptian government has formally joined Russia, along with Iran and Iraq, for its fight against terrorists.

Or, is it to tell the Russians to go easy with ISIS militants in Syria?
At the very least, the straightforward blame on ISIS is suspect considering that other geopolitical players in the region were obviously involved, and the fact that all ISIS cadres are mere dispensable pawns.

Philip Hammond: halting flights will have an immense impact on Egyptian economy – video

The UK foreign secretary, Philip Hammond, speaks to reporters to confirm Britain is warning against all but essential travel to and from the Egyptian resort of Sharm el-Sheikh. The decision is due to the government’s belief the downing of an Airbus over the Sinai peninsula could have been caused by an explosive device. Hammond says although the change will have an impact on the economy of Egypt, the safety of British nationals must come first
continue watching 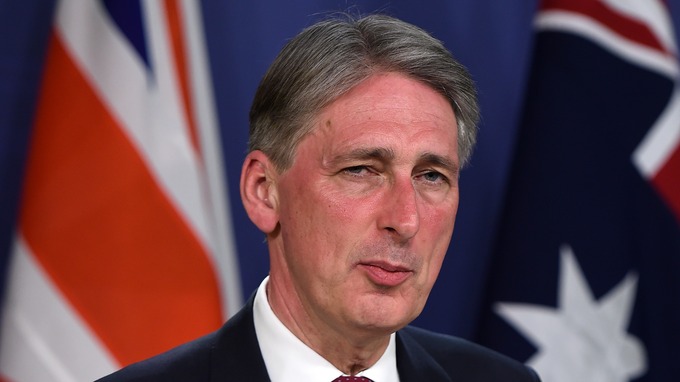 by M. Alex Johnson, Jim Miklaszewski and Courtney Kube
There’s significant evidence that a bomb brought down Russia’s Metrojet Flight 9268 over the Sinai Peninsula last weekend, U.S. officials told NBC News on Wednesday, saying U.S. investigators are focusing on ISIS operatives or sympathizers as the likely bombers.
Questions have swirled over whether foul play or terrorism may have downed the Metrojet-operated Airbus A321 since it crashed in Egypt on Saturday, killing all 224 people aboard. ISIS’s media office in Sinai released an audio message Wednesday reiterating its claim of responsibility. Neither Wednesday’s claim nor an earlier one immediately after the crash said how ISIS is supposed to have brought down the plane.
A U.S. official told NBC News he expects Russia to retaliate “heavily and militarily” if the theory is borne out.

U.S. officials stressed that while they believe it’s “likely” that a bomb was on the plane, it’s still too early to conclude that for certain. They told NBC News that mechanical failure remains a possibility.
Related: Investigators Examine Metrojet Black Boxes
NBC News’ terrorism intelligence partner, Flashpoint Global, said “it is unlikely that [ISIS] has the ability to have targeted and downed the airliner,” noting that the group continues to release publicity about the incident without providing any video of its actually targeting the airliner.
But NBC News national security analyst Kevin Baron, executive editor of national security analytics company Defense One, said that if ISIS was able to plant a bomb on the plane, “it’s a real game-changer for the region.”
State Department spokesman John Kirby told reporters Wednesday: “We need to advise U.S. workers not to go to the Sinai.” No U.S. commercial flights operate over Sinai, aviation officials told NBC News.
A U.S. official said investigators are looking at the possibility that an explosive device was planted aboard the plane by ground crews, baggage handlers or other ground staff at the Sharm el-Sheikh airport before takeoff. Passengers and the flight crew weren’t significantly suspected after intelligence scrub of the passenger manifest and the crew showed no one with suspected ties to any terrorist group, officials said.
Three top officials at the airport, including the head of security, were fired Wednesday after investigators uncovered numerous lax security procedures, officials told NBC News.
The comments track with statements Wednesday by British officials.
Foreign Secretary Philip Hammond said after an emergency cabinet meeting Wednesday night that a review of “all the information we have available from a range of sources” led to the conclusion that “there is a significant possibility that the crash was caused by an explosive device onboard the aircraft.”
Prime Minister David Cameron issued a delay on U.K.-bound flights from Sharm el-Sheikh, saying he wanted U.K. aviation experts to assess security there.
Related: Satellite Shows Heat Flash When Russian Metrojet Plane Crashed, But No Missile
British investigators haven’t been among the teams investigating the crash, but Egypt’s Aviation Ministry said data from the crashed plane’s data recorder had been “extracted and validated.”
nbcnews.com

Russia’s president has signed legislation enabling countermeasures in the case of the wrongful arrest of Russian state property abroad. The law, based on reciprocity, curtails the jurisdictional immunity of the country in question if not agreed otherwise.
The document was published on Russia’s official legal information website and therefore has come into effect.
According to the new law, the jurisdictional immunities of a foreign state and its property could be limited on the territory of Russia on the principle of mutuality, in the case that the jurisdictional immunity of Russia has been found to be suffering limitations on the sovereign territory of that country.
The provisions of the law would not be applied if Russia and the other country have reached an agreement to act differently.
The judicial immunity of a foreign entity that has filed a legal action, entered legal argument or has taken any other substantive action in a Russian court will be considered revoked.
The revoking of a foreign country’s judicial immunity in any given legal argument is irrevocable and will be applied to all stages of judicial examinations.
rt.com

MOSCOW (Sputnik) — According to the ministry, some 100 military personnel “deployed up to 10 EW centers and stations” in the training area, including brand-new Borisoglebsk 2 electronic warfare systems, which is capable of suppressing mobile satellite communication and radio navigation systems.
Compared to the previous generation of this system, the Borisoglebsk 2 has a wider range of radio surveillance and suppression, higher-speed frequency scanning and greater precision in locating sources of radio wave emissions.
sputniknews.com
Meanwhile, a major diplomatic standoff is now brewing between UK and Egypt for the former’s unilateral announcement of ISIS involvement in the ill fated crash of Russian fllight 9268…

A diplomatic row has broken out between Cairo and London after the UK Government barred all British flights into and out of Sharm el-Sheikh airport over security concerns at the airport and intelligence that ISIL planted a bomb on the Russian aircraft that crashed on October 31.