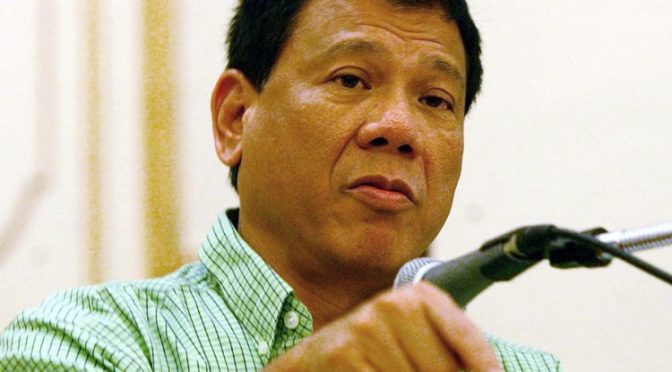 For the nth time the next president of the corporate Republic of the Philippines refuses to dance to the White House music in the South China Sea issue.
This latest reconfirmation of his readiness to talk to China bilaterally for the joint exploration of the Spratlys [known locally as Freedom Islands] which came after the US  Embassy asked for his stand on the issue which the US itself has aggravated, reinforces the people’s desire for peace in the region.

https://www.youtube.com/watch?v=qZ8mmU182FA
Why the American Embassy in Manila would want to summon a front running presidential candidate regarding his China policy at this early?
Are they trying to pressure Duterte and every other candidate in the upcoming Philippine presidential elections now that they are losing every battle front in the ongoing covert war for global control with the BRICS?
What if a candidate is not committed to their interests in the region, are they going to assassinate him at this period of the campaign, or sabotage the elections away from his favor?
The US interference in Philippine political affairs is not only revolting but quite an affront to the intelligence of the people.
Compare that to Russia’s involvement in Syria where the Russian aviation forces are only based on one airfield, and publicly announcing that it is not for Russia, nor any other country to determine Syria’s future but the Syrians alone.
The return of the US military without a formal treaty passed by the Senate is nothing short of an American reinvasion of the Philippines.
Among other negative consequences of the presence of the American military in the country was the unnecessary and costly deaths of 44 SAF operatives of the Philippine National Police, who were providing protective cover to an undisclosed number of American Special Forces, embedded during the operation to eliminate terrorist Marwan inside Muslim rebel territory in Mindanao.
Incidentally, two American troops were also killed during Operation Exodus, and were extracted by a US military helicopter, a priest witness said [here].
Those same Western Puppets in this country who are officially responsible for the SAF44 mayhem, among other stupidity and treachery, are now under threat of losing political power with the emergence of a socially conscious population, the majority of whom are fully determined to put their man as next president.
The White House understands this growing grassroots’ departure from US exceptionalism and the move towards geopolitical independence, and it is now trying to intimidate the people’s candidate even this early in the election campaign.
The self-confessed leftist Duterte is publicly refusing to bow down to this early US interference by further asking, “Why the United States did allow the completion of the construction of islands and military airstrips over reefs in the Spratlys in the first place?”
It is our understanding that the periodic instigation for war in the West Philippine Sea, aka South China Sea, is just a way of creating a scenario whereby the Philippines may need US military assistance in the event of a full blown war with China, a pigment of their own imagination from the very beginning.
This is also being used currently to justify the re-entry of US forces, not just with 2 bases, but in at least 8 existing Philippine military bases across the country.
Neither of the running candidates are perfect, and most of them are more than ready to continue licking American asses for whatever perceive personal advantage they could gain once elected, but it is only Duterte who publicly hinted that his leadership will put a stop to perpetual subservience to US diktats.
The stupid presidency of BS Aquino will be filing criminal cases against Duterte as dictated by his puppet masters at the US embassy.

“Allies of President Benigno Aquino III are preparing to file charges against PDP-Laban presidential bet Rodrigo Duterte for his supposed role and involvement in extrajudicial killings as mayor of Davao City.

This was the claim of the Duterte camp on Friday.

“We view this development with serious cause for concern,” he added.

Laviña tagged supposed legal action as a desperate move by administration candidates to derail the aspirations of Duterte to become the next Philippine President, especially now that momentum is on their side.

“This ploy to resurrect the worn out allegations against the Mayor is a vain and desperate attempt to stop that momentum,” he said.

Laviña questioned the timing of the charges that will be filed and pointed out that the case could have been filed earlier when Duterte was not yet running in the May elections. –

Majority of the people are betting on the strong-willed candidate that has a proven record of walking his talk. It would not surprise us if the Cabalist hitmen are already hot on his trail.

Under his presidency, the Philippines will never go to war with China, and China is not going to war with Philippines  which is populated with Chinese blood, too.
In fact, up to  now, China is not responding militarily to regular Philippine maneuvers in the area. Instead, they chose to build their artificial islands on top of the reefs to position countermeasures against the forced reestablishment of American military bases inside Philippine territory, and has actively repelled the recent US Carrier Strike Group intrusions in the area.
We are explicitly condemning these recent attempts to make us pawns in the ongoing US geopolitical game from our own territory.
Not anymore.
On top of the covert geopolitics game just described, Duterte is also threatening Khazarian El-Chapo methamphetamine enterprise which has already infected at least 3 police generals in the country, and of whom Duterte is poised to kick them all out for destroying the present generation with drug addiction.
It will be from these same police ranks involved in drug and kidnapping syndicate that the demolition agent against Duterte will be taken from to support the government’s supposed case against him.
This does have a precedent in the recent past when the Ombudsman suspended police chief was instead appointed by the stupid president for the planning and execution of OPLAN: Exodus that resulted in the deaths of 44 SAF officers already mentioned above.
This Duterte will just ruin the party and must never be allowed to sit at the helm of the Philippine presidency at all cost.