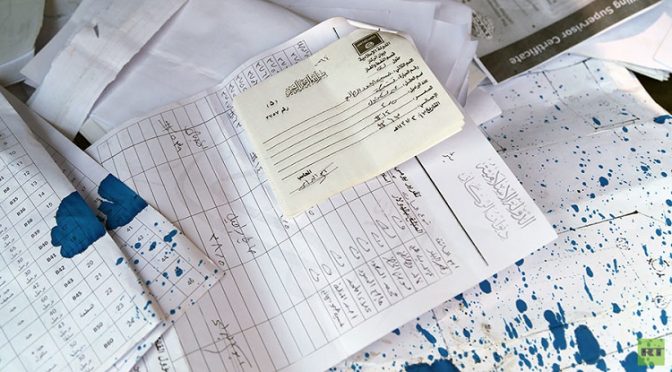 In another Russian media offensive, RT releases a damning documentary to inform the world that any terror attack on the West by the Islamic State enjoys the support of Turkey and NATO.

This is the consequence of the thousands of documents left by escaping Islamic State militants from Syria and into Turkey, which firmly established a paper trail of transactions involving the two allies.
In fact, there are multiple reports that those who were involved in the recent Brussels bombing were going in and out of Western intelligence prison cells for years [here]. These terrorist assets are doing great service for the authorities who kept on asking higher military and intelligence budgets.
Erdogan will find this new mainstream revelation really uncomfortable especially as it is trying to bleed the European Community of its $6 billion anti-refugee flooding program with Turkey.

An RT Documentary crew filming in northern Syria has seen Islamic State (IS, ISIS/ISIL) documents abandoned by retreating terrorists and found by the Kurds that, along with captured IS recruits, provide a stunning insight into the alleged Turkey-IS oil trade links.
Shortly after the outbreak of the Syrian war, IS became a game-changer in Iraq and, in particular, Syria. Beheadings on camera, mass killings, and enslavement, as well as apparent connections to the Paris and Brussels attacks had become synonymous with the terror group, giving it wide publicity.
Running a viable militant organization with such remarkable capabilities would be impossible without some logistical and financial support from the outside.
Turkey, which has been actively engaged in the Syrian war since the outset, has repeatedly denied claims that it is aiding IS. However, while Ankara insists that it is the jihadist group’s sworn enemy, facts on the ground often tell a different story.
RT has spoken to several witnesses who were involved in Islamic State’s trade activities and accessed the terror group’s documents, which provide insight into how and where foreign militants enter Syria to join the terrorist “state.”

The RT Documentary team did most of its filming in the town of Shaddadi, located in the Syrian province Hasakah, which has been partly overrun by IS jihadists. Following the liberation of Shaddadi, which is home to some 10,000 people, RT filmed Kurdish soldiers walking around what used to be the homes of IS fighters and examining piles documents that had been left behind.
Some of the files seized at the scene turned out to be detailed invoices used by IS to calculate daily revenues from their oil fields and refineries, as well as the amount of oil extracted there. All the documents had Islamic State’s symbol at the top.

The files showed that “IS has kept very professional records of their oil business,” said the author of the new RT Documentary on Islamic State filmed in northern Syria, who chose to remain anonymous for security reasons.
Every invoice included the name of the driver, the vehicle type driven, and the weight of the truck, both full and empty, as well as the agreed upon price and invoice number.
One of the discovered invoices dated 11 January, 2016, says that IS had extracted some 1,925 barrels of oil from Kabibah oil field and sold it for $38,342.

IS oil goes to Turkey – IS fighters come via Turkey

RT spoke to local residents who had been forced to work in the IS oil industry about what it was like working at the terrorist-controlled oil refinery and where the extracted oil was sold.
The locals attested that “the extracted oil was delivered to an oil refinery, where it was converted into gasoline, gas and other petroleum products. Then the refined product was sold,” the RT documentary’s author said. “Then intermediaries from Raqqa and Allepo arrived to pick up the oil and often mentioned Turkey.”
Important information revealing the connection between IS and Turkey was provided by a Turkish militant previously captured by the Kurds. The IS recruit said on camera that the terrorist group does, in fact, sell oil to Turkey.
“Without even us asking the fighter directly, he admitted that the reason why it was so easy for him to cross the Turkish border and join IS was, in part, due to the fact that Turkey also benefited. When asked how, he said that Turkey gets something out of it – something such as oil.”
RT was also able to speak with a Kurdish soldier in the area, who displayed a collection of passports he had gathered from the dead bodies of IS fighters. The documentary crew’s exclusive footage shows the documents of several jihadists who had come from all over the world, including countries such as Bahrain, Libya, Kazakhstan, Russia, Tunisia, and Turkey.

Most of these foreign fighters seemed to have come via Turkey, as all of their passports contained entry stamps issued at Turkish border checkpoints.
A YPG member also provided some photos that were retrieved from a USB drive allegedly belonging to future IS militants. One photo showed three men standing in front of the Obelisk of Theodosius, known today as Sultanahmet Meydani, a famous landmark in Istanbul. The next photo showed the three among other fellow militants somewhere in Syria – all armed and equipped.
One of the IS fighters that RT interviewed revealed that there had been no border guards waiting for them when they crossed from Turkey into Syria.

Turkey’s logistical support for extremist fighters trying to overthrow Syrian President Bashar Assad’s government, or at least its non-interference with their cross-border movements, has been widely reported, but little has been said about the ideological support coming from Turkish soil.
Among the documents left behind by the terrorists at an IS-run hospital, RT’s crew discovered an Islamist propaganda leaflet printed in Arabic titled “How to wage a perfect battle against the criminal Assad’s regime,” which described ways to combat the Syrian government.
Curiously, the brochure was printed in Turkey, with the cover openly displaying the postal address and phone number of an Istanbul printing house, supplemented by Facebook contacts.

“Many of the people spoke about the connection with Turkey. Turkey is the direct neighbor of IS. If it was willing to close the ‘connection’ between Turkey and IS, the terrorist organization could no longer survive,” the author of the RT documentary said, recalling interviews with Kurds and captured IS recruits. “If IS would stop receiving weapons, new recruits, food, and other help from Turkey, then IS would lose a big sponsor.”
Turkey benefits from Islamic State because the terrorist group provides it with cheap oil and is fighting both Syria’s government and Kurdish population. This is an opinion shared by both Kurds and their mortal enemies from the jihadist organization. The IS documents obtained by RT may provide additional evidence revealing the dirty game being played by the government of Turkish President Recep Tayyip Erdogan in Syria.
https://www.rt.com/news/336967-isis-files-oil-turkey-exclusive/
This should implicate all those intelligence agencies, and governments working with Turkey, Qatar, Israel, Saudi Arabia, and some Western governments, i.e. those same governments that are now terrorizing their own people with the Islamic State terror brand name.
Yes, they are going to continue exploiting the ISIS brand of terror even if it’s already been vaporized in Syria to continue sowing fear in the West for the continued advancement of their multiple fascist agenda.
This RT documentary is not addressed to these politicians but to the people in Europe, so that they would finally wake up and do something about Western government sponsored terror.
The empty streets of Brussels is now giving us the apocalyptic preview of what the Khazarians want this world to be.