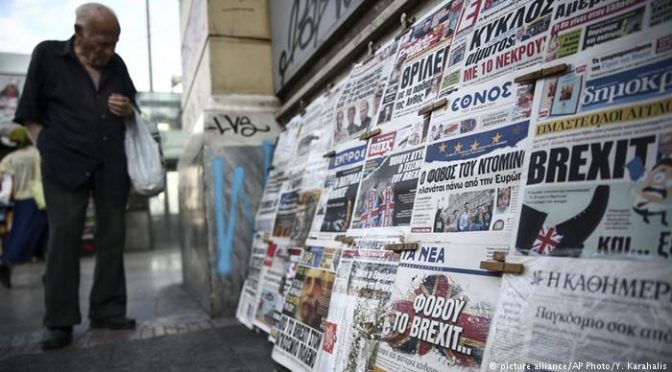 As ludicrous as the mainstream media have always been, Brexit is now being used as the new bogeyman for just about anything that is wrong about the Empire.


.. and will be blamed for more in order to prevent others following suit, including those states from the other side of the Atlantic.

Barack Obama had been a key voice warning that leaving the European Union could hurt Britain. But with Thursday’s shock referendum result now sinking in on his side of the Atlantic, there are growing concerns about what this seismic geopolitical event could mean for Americans too.

The International Monetary Fund recently estimated in a report published in Washington that the Brexit could knock up to half a percentage point off the combined output of all advanced economies by 2019, including the US. The IMF expects international trade and investment globally will shrink in response to the political uncertainty of an exit, especially one that may throw Britain, a key US trading partner, into sharp recession.

Turmoil in the bond market has already had a more direct impact on US monetary policy, after Janet Yellen warned that uncertainty over Brexit was a factor in the Federal Reserve’s latest decision not to raise interest rates. Wall Street grappled with volatility rarely seen since the financial crisis of 2007-08 after Britain voted in favour of leaving on Thursday, with many US banks based in the City of London on the front line.

The biggest concern in Washington is not just over the waning influence of its most important diplomatic ally within Europe, but the destabilising effect an exit could have on the continent as a whole. If other member states follow suit, the EU itself could slowly unravel, leaving it vulnerable to growing Russian economic influence and perhaps weakening Nato too. Some fear the western alliance, constructed after the second world war and a cornerstone of US influence in the world, now has a deep crack running through it.

But is there really something wrong about Brexit?
Only those who are ignorant about the true nature of the European Union want to be part of it still. Those who have benefited largely from the current setup are the ones passionately fighting for it.
To the open minded, some few simple facts need to be laid out right away. These are:

1. The EU leadership is composed of unelected, anti-democratic bureaucrats that most Europeans knew nothing about;

2. The EU Parliament is not authorized to craft and pass laws which protect and serve the Europeans;

4. You don’t need trade deals to buy and sell goods from other countries. You just need to follow their own regulations;

If there’s really something wrong with Brexit, it’s the chance for the British to return to the path of freedom.
If there’s only one video that you need to watch and learn as much about how the British people lost a lot of its economic freedoms through its membership in the European Union, and why the non-EU member Switzerland has more economic freedom and are far better off than all of its European counterparts, this should be it…

One thing inherent to all schemes of lies is that they cannot be sustained indefinitely due to the negative effects that are sure come out later, disproving earlier claims. It’s no wonder why other EU countries are now contemplating of following the Brexit path.
https://www.youtube.com/watch?v=yHq1hNdhjKI
The ongoing Project Fear, or Project Threat, is meant to sabotage the Brexit process in order to force the UK to have a second referendum that will defeat the Brexit vote.
It must be understood that the UK economy, as all other economies, is not dependent on politics and politicians. The economy is dependent on the people and their capacity to buy and create goods, both tasks, of course, have nothing to do with politics, but more so with industry and creativity.
https://www.youtube.com/watch?v=m5e5fPKUPVE
The EU collapse is not a collapse of the European economy, but is a collapse of a Corporate Empire that is serving only the plutocratic interest of a few inbreed families of Europe.  The EU is only about the preservation of the few who have appointed themselves to the royalty, an idiotic concept of exceptionalism.
The rest of the world will always be eager to do business with the Europeans, and the massive infrastructures for doing so are now being laid out across Eurasia and certain parts of Latin America. There will be a New Planetary Order that is free from wars, weather warfare and hunger.