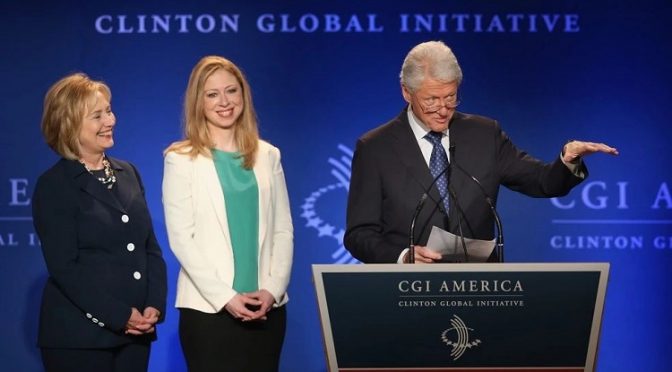 A thread on 4chan with an FBI insider confirms everyone’s worst suspicions. The Hillary Clinton email server was merely a distraction from the Clinton Foundation and most of DC is in up to their necks in what could be the biggest scandal of all times.
This inside info from someone claiming to be a high level FBI analyst whose job was to look at the records, with NOTES added to clarify some of the responses.

The smoking gun is about to arrive and there are “a lot of people involved”. To save everyone time, here are the choice bits with the link to the entire archive, where you can decide for yourself if this is for real or not. Looks like Trump and Putin hold some of the cards. This could be the most interesting election ever. (Language Warning):
This level of corruption is something expected in a developing country or a place like China, where they openly persecute good people and have industrial scale organ harvesting of Falun Gong and others. The Clinton Foundation is up to their neck with Jiang’s vile regime in China, but there is so much to see here…keep reading.

The ENTIRE Government is Involved
>>79482245
My opinion is the entire government is guilty of treason, which is why HRC’s death would not cease the investigation or prevent further scandals. Many, many people are involved.
>>79482342
There already is enough to indict. Comey has been trying to stall because he does not want to face the Clinton Machine, as well as the rest of Washington D.C. But this case would explode into a million other cases if fully brought to light, and then we would be one agency competing against the entire government and a hoard of other interests. It is a very tense and uncomfortable position.
What Lynch is saying is she will accept whatever they do and make her determination as she will. Nothing about her responsibilities has changed, she is simply trying to keep her hide intact.

79493354
Sex rings are popular in all governments, but pedophilia is primarily in British parliament & Saudi Arabia, and that’s why HRC and BC love foreign donors so much. They get paid in children as well as money. Dig deep and you can find it. It will sicken you.

Original thread archives at : http://archive.is/RffAd#selection-33761.0-33761.121
http://www.redflagnews.com/headlines-2016/fbi-insider-leaks-all-clinton-foundation-exposed-involves-entire-us-government
Thanks a lot, John.

30 thoughts on “The Situation is So Intense, it Involves the Entire US Government | FBI Insider”