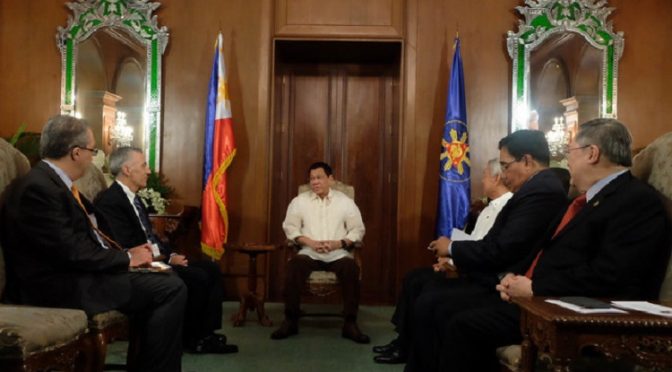 From being hostile and antagonistic to “courteous guests,” US lawmakers, together with the US ambassador to the Philippines, paid a courtesy call to the newly installed Philippine president Rodrigo Duterte, just a few days ago.

“Among the principal attendees from the US delegation were Ambassador to the Philippines Philip Goldberg, Senator Brian Schatz, Senator Christopher Murphy, Congressman Ted Deutch, Congresswoman Donna Edwards, and Congressman John Garamendi.
Upon entering the President’s Hall, President Duterte welcomed the first time visitors in the group and asked them about the places they want to visit in the Philippines.”

After the US lawmakers’ visit post-Hague verdict on West Philippine Sea issue, Duterte issued a statement that “no negotiation” between the Philippines and China will occur.

We were first US elected officials to meet w Duterte. Says he will not trade territorial rights to China. Tribunal decision non-negotiable.

In Manila – just out of meeting w new Philippines President Duterte. Assured us he has no plans to negotiate w China over islands dispute.

They would not have tweeted that if for them that’s insignificant to the US geopolitical and geo-economic interests in the region, right?
This is in contrast to an earlier administration pronouncements when the former president Fidel V. Ramos was “respectfully” asked to go to China and start the “bilateral talks” soonest possible.
US Secretary of State John Kerry is also set to visit the Philippines from July 26 to 27 to meet with Philippine President Rodrigo Duterte, a day after the first state of the nation address in Philippine Congress. This visit will remind the country about the “full range of US cooperation” with the new administration.

Kerry aims “to discuss the full range” of US cooperation “with the new administration,” Toner said in a statement.

Before this, Counselor Kristie Kenney of the US State Department, a former US ambassador to the Philippines, flew to Manila to meet with key Duterte officials. Kenney said she did this upon Kerry’s instructions.

As expected, this sudden Duterte turnabout is raising concerns among the nationalists. But, knowing the legalist in Duterte, we believe that both “no negotiation” and “bilateral talks” phrases will never be congruent.
While “bilateral talks” presuppose mutual interest and mutual respect among participants, and connote honest desire for exploration towards a peaceful development on a particular subject, “no negotiation” certainly means that the Philippines will never put the subject of its inherent rights in the Spratlys to any process of horse trading. Besides, putting sovereignty and exclusive economic rights up for negotiation is in gross violation of the Philippine constitution, in much the same way as going to war as the first option in solving regional conflict is.
To put it simply, a negotiation process mostly involves two antagonistic parties seeking as much advantage as possible, ending up with either uncomfortable, or forced compromise, while bilateral talks are mostly conducted in a friendly manner.

China’s position has always been for bilateral engagement and has expressed in more ways than one about its frustration against the unilateral action by the country in The Hague.
Even then, China underscores the  healthy relationship between the two countries, and to which the Philippines has responded positively.
Despite the seeming stand-off, Mr Yasay said Manila would continue to pursue efforts to open negotiations with Beijing. “I sense there is room to talk very quietly, using backdoor channelling,” he said.
“In recent years, the development of China’s trade relations with the Philippines overall has been smooth and stable. China is willing to develop mutually beneficial and diverse trade relations with the Philippines,” Straits Times cited China’s Vice-Minister of Commerce Gao Yan as saying.
The Duterte government understand that it would take time for China to tell its people that the contested body of water must be shared among the peripheral ASEAN countries, taking into consideration its national pride But eventually, it will give in to the tribunal verdict when no one is looking.

The overall view of this article is not to discount all of the vested interests of China and other parties in the region, but to consider the undeniable fact that all of these conflicts are mere part of the battle currently being fought in the region for the ultimate control and management of the planet for the rest of the century, and the West has a worthy challenger for the very first time in the BRICS Alliance.
We maintain the position that China’s aggressive island and airstrip constructions, and all military exercises in the area, are not to prepare for a ground invasion against any of our territory, but were only triggered by the weakness, and by all indications, sheer stupidity of the previous administration of BS Aquino which paved the way for the eventual reentry of the US armed forces though the Enhanced Defense Cooperation Agreement EDCA with the US, after the Philippine Senate refused to renew the mutual defense treaty with the United States, back in 1992.
The current EDCA mutual defense agreement will only kick in when the country is attacked, and for this reason we cannot disregard the possibility of a false flag attack against our fishermen in the contested areas in the Spratlys for purposes of providing the pretext for a military confrontation between China and the United States in the region, considering the existence of a shadow government within the US Central Intelligence Agency that is outside the control of the US president.
Although the above mentioned US lawmakers are not known to be tainted with Zionism as Victoria Nuland and John McCain, still the country must be very careful in dealing with the West, as adequately discussed in our previous article on The Congo Genocide & Rape of its Vast Mineral Resources”, there is a very clear distinction between Western governments’ foreign policies, and that of China. The latter prefers “resources for infrastructures” economic cooperation, while the former has the habit of totally ignoring the welfare of its host and is more focused on efficiently exploiting the conquered territory, by proxies or otherwise, in spite of its own prior humanitarian intervention and “full range of cooperation” claims.
In contrast to previous Philippine administrations, the Duterte government sees things as they really are and is expected to stubbornly stick to its independent and patriotic foreign policies, and as far as the West Philippine Sea issue is concerned, “War is not an option,” says the president.

The baseline to any future talks with China would be the confirmed exclusive economic zone EEZ rights of the Philippines, and proceed bilaterally from there.

In the same fashion of metamorphosis, the top Vatican hierarchy assigned to this province also paid the same courtesy call to the president, earlier preceded by a visit from a retiree cardinal from the South.

During the campaign, the Duterte camp released a damning documentary evidence of some priests requesting ex-president Gloria M Arroyo to provide them with SUVs so they could “serve the people in far flung areas” of the country, on top of the unequivocal statement to turn the election into a referendum between him and the Catholic Church.
Duterte also threatened to name names of those priest who were involved in extra-marital relationships.
This was in response to the active negative campaign lodged by the Archbishop of Manila Socrates Villegas in all Catholic churches in the country.
In all probability, they don’t want Duterte to rattle their comfortable cages again. They, the Sacred Hypocrites, can play nice, too, they must have said.