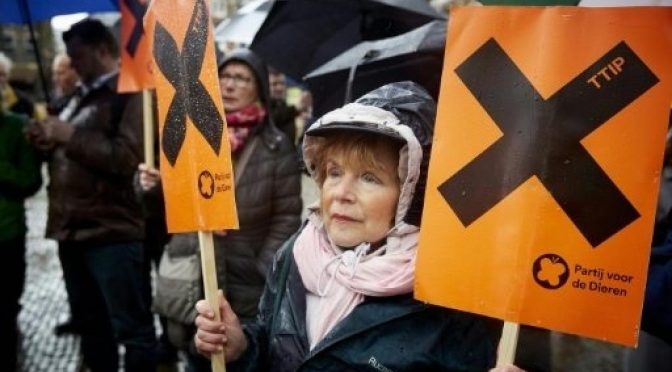 This is one of those incremental changes that we can celebrate on, but it doesn’t mean that we can let our guards down already.
The enemy is very cunning and knows how and when to play dead only to rise at some opportune time in the future.

This has been the case of the banishment of the Jesuits in the mid-18th century. Look where in the pyramid they are now.
Mass actions against corporate tyranny should be decisive and perpetual. Even better, refuse all rigged political exercises, and legalized extortions. The German Minister of Economy and Vice-Chancellor, Mr. Sigmar Gabriel, a few days ago has declared that the European Union should not submit to the demands of the United States, referring to the negotiations on the TTIP (Transatlantic Trade and Investments Partnership). He said the negotiations failed. By saying so, he joined French Prime Minister, Manuel Valls, as well as French Secretary of State for External Trade, Mr. Matthias Fekl.
Negotiations started in 2013. After 14 ‘rounds’ of talks dealing with 27 points, no agreement has been reached, none whatsoever, leading to the conclusion that the deal is dead. Even though Mme. Merkel defended the treaty with all her heart up to the end of July 2016, both Germany and France now request a definite end to the negotiations.
The collapse of the TTIP is one of the best news for Europe – and I mean the people of Europe – in recent times; an initiative of the two major players in the EU. This decision has several meanings:
1. European countries are gradually taking back their sovereignty from Brussels and decide for themselves what is good for them and for Europe;
2. With a failed TTIP Europe escapes, or avoids, being enslaved by US corporatism, financial institutions – and US legislation;
3. Europe may now continue making its proper policies on socioeconomy, environment, food safety, agriculture — and
4. Europe is now freer to pursue its own monetary policy. Under the grip of the TTIP, it would have been difficult, say impossible, to adopt a monetary policy outside of the Euro which many countries would like, openly or covertly – some without making a lot of noise for fear of being ‘reprimanded’ by Brussels.
The fact that authorities of both, France and Germany, stated in unison that the negotiations failed, is a sign that there is still a spirit of autonomy in Europe. What is called ‘negotiations’ were never really negotiations – a give and take between equal partners. It was from the beginning a one-way street, where the exceptional nation imposed its rules. There was no way of getting the slightest concession from them – not an iota.
No doubt Washington had no intention to share any of the benefits of this ‘Free Trade Agreement’ with Europe. The exceptional people wanted it all. For example, the term ‘Appelation Contrôlée’ for wine and cheese in France and other European countries, used to protect the farmers of a given region – would have disappeared. The US wanted everything to be open for the ever dictating ‘market’. Nothing was to be clearly defined, as far as Europe was concerned. No transparence – just a vast base for cheating, consumers and nations.
TTIP talks were held in top secret, behind closed doors. Not even politicians, let alone the public at large which eventually would have had to bear the consequences of the deal, had access to the documents being ‘negotiated’. – It showed the Machiavellian nature of empire at its best.
China knew very well why they were not even interested in participating in the TPP (Transpacific Partnership), a similar trade agreement with eleven Pacific nations and the US.
Let’s recall the key point that would have meant disaster for Europe:
– A private corporate tribunal that would have had supremacy over sovereign government legislation. For example, the tribunal could have imposed ‘sanctions’ or fines on governments, whose legislation, say for health, environmental protection and other social reasons, would have reduced corporations’ profit margins.
– Similar in the banking sector, monetary policy would have been firmly dictated by the FED, Wall Street (i.e. Goldman Sachs – see Greece and the head of the ECB, a former GS exec) and the European Central Bank. This for now is still the case, but with an unsustainable and unreformable EU and Euro, both are destined to disappear sooner or later. It is likely that many countries are already quietly and clandestinely arranging for “Plan B” – preparing exit strategies. Indeed, since BREXIT, there are numerous political movements to this effect under way – and this not only in the most devastatingly affected southern European countries, but also in northern Europe.
– Agriculture policy would have been dictated by Washington, especially with regard to GMOs and ag-subsidies. Monsanto and the like would have had free access to all of Europe, and none of the EU members could have passed legislation prohibiting genetically modified seeds.
– Standards for health and nutrition would have been imposed by Washington, i.e.  by the Food and Drug Administration (FDA). Most of these standards are considerably weaker than European equivalents, potentially exposing European citizens to greater health risks than current EU standards foresee.
– Labor laws would have been weakened in according to US standards which foresee virtually no protection for workers. The Brussels imposed new labor law in France, dubbed as the ‘El Khomri law’, after the French Minister of Labor, Myriam El Khomri, would reduce significantly French labor rights, fought for and attained with decades of efforts – literally sweat and tears – by French workers and unions. The new French labor law, signed as a decree by PM Manuel Valls under a dubious special provision in the Constitution (instead of being passed through Parliament), was a precursor for things to come in the rest of Europe – had the TTIP gone forward. This controversial law is currently at the demand of more than 60 French Parliamentarians being reviewed by the French Conseil d’Etat (equivalent to other countries’ Supreme Court) and may quite possibly be either canceled or sent to Parliament for a decision. Now that the TTIP is dead, it is possible that the law will be repealed.
The day the TTIP died was a great day for Europe. Although Europe is far from being out of the woods. Her own problems keep piling up, many of them also a direct or indirect consequence of empire.
To mention just a few –

This time the rest of the world would very likely not be spared. Many countries are conscious of this danger and would like to get out of NATO, but don’t dare say so, because of fear from the boots of Washington.
Let’s hope the death of the TTIP will bring a new breeze of fresh air and ideas into European sovereignty.
This article is in part based on an TV debate sponsored by PressTV, French Edition.
http://www.globalresearch.ca/good-news-for-the-people-of-europe-the-transatlantic-trade-and-investment-partnership-ttip-is-dead-negotiations-have-failed/5544425

7 thoughts on “The Transatlantic Trade & Investment Partnership (TTIP) Is Dead”