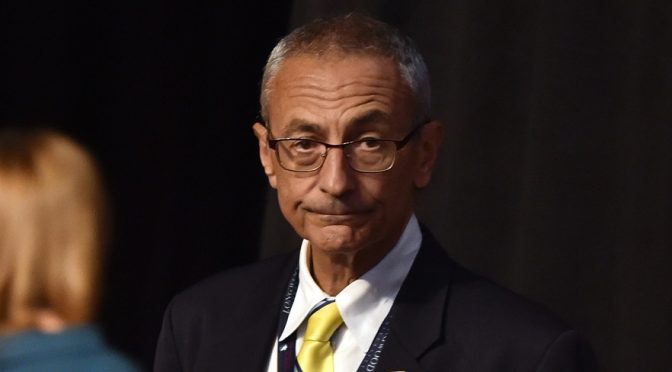 With the Wikileaks release of thousands of emails belonging to John Podesta, very little is known in US society about Podesta himself. While he’s maintained a low profile, John Podesta is actually considered one of Washington’s biggest players, and one of the most powerful corporate lobbyists in the world.

In this episode of The Empire Files, Abby Martin explores John Podesta’s political rise, his vast network of corporate connections and his think tank “Center for American Progress.” Learn why the Podestas and the Clintons are a match made in ruling class heaven.
https://www.youtube.com/watch?v=9fat63bqvG8

WikiLeaks begins its series on deals involving Hillary Clinton campaign Chairman John Podesta. Mr Podesta is a long-term associate of the Clintons and was President Bill Clinton’s Chief of Staff from 1998 until 2001. Mr Podesta also controls the Podesta Group, a major lobbying firm and is the Chair of the Center for American Progress (CAP), a Washington DC-based think tank. Part 1 of the Podesta Emails comprises 2,060 emails and 170 attachments and focuses on Mr Podesta’s communications relating to nuclear energy, and media handling over donations to the Clinton Foundation from mining and nuclear interests; 1,244 of the emails reference nuclear energy. The full collection includes emails to and from Hillary Clinton.

In April 2015 the New York Times published a story about a company called “Uranium One” which was sold to Russian government-controlled interests, giving Russia effective control of one-fifth of all uranium production capacity in the United States. Since uranium is considered a strategic asset, with implications for the production of nuclear weapons, the deal had to be approved by a committee composed of representatives from a number of US government agencies. Among the agencies that eventually signed off the deal was the State Department, then headed by Secretary Clinton. The Committee on Foreign Investment in the United States (CFIUS) comprises, among others, the secretaries of the Treasury, Defense, Homeland Security, Commerce and Energy.
As Russian interests gradually took control of Uranium One millions of dollars were donated to the Clinton Foundation between 2009 and 2013 from individuals directly connected to the deal including the Chairman of Uranium One, Ian Telfer. Although Mrs Clinton had an agreement with the Obama White House to publicly identify all donors to the Clinton Foundation, the contributions from the Chairman of Uranium One were not publicly disclosed by the Clintons.
When the New York Times article was published the Clinton campaign spokesman, Brian Fallon, strongly rejected the possibility that then-Secretary Clinton exerted any influence in the US goverment’s review of the sale of Uranium One, describing this possibility as “baseless”.
Mr Fallon promptly sent a memo to the New York Times with a rebuttal of the story (Podesta Email ID 1489).
In this memo, Mr Fallon argued: “Apart from the fact that the State Department was one of just nine agencies involved in CFIUS, it is also true that within the State Department, the CFIUS approval process historically does not trigger the personal involvement of the Secretary of State. The State Department’s principal representative to CFIUS was the Assistant Secretary of State for Economic, Energy and Business Affairs. During the time period in question, that position was held by Jose Fernandez. As you are aware, Mr Fernandez has personally attested that “Secretary Clinton never intervened with me on any CFIUS matter.”
What the Clinton campaign spokesman failed to disclose, however, was the fact that a few days before sending his rebuttal to the New York Times, Jose Fernandez wrote on the evening of the 17 April 2015 to John Podesta following a phone call from Mr Podesta (Email ID 2053): “John, It was good to talk to you this afternoon, and I appreciate your taking the time to call. As I mentioned, I would like to do all I can to support Secretary Clinton, and would welcome your advice and help in steering me to the right persons in the campaign”.
Five days after this email (22 April 2015), Clinton spokesman Brian Fallon wrote a memo to the New York Times, declaring that “Jose Fernandez has personally attested that ‘Secretary Clinton never intervened with me on any CFIUS matter’,” but Fallon failed to mention that Fernandez was hardly a neutral witness in this case, considering that he had agreed with John Podesta to play a role in the Clinton campaign.
The emails show that the contacts between John Podesta and Jose Fernandez go back to the time of internal Clinton campaign concern about the then-forthcoming book and movie “Clinton Cash” by Peter Schweizer on the financial dealings of the Clinton Foundation.
In an email dated 29 March 2015 (Email ID 2059), Jose Fernandez writes to Podesta: “Hi John, I trust you are getting a brief rest after a job well done. Thanks no doubt to your recommendation I have joined the CAP [Center for American Progress] board of trustees, which I’m finding extremely rewarding.”
Julian Assange

3 thoughts on “The Podesta Connection to Washington Deplorables”