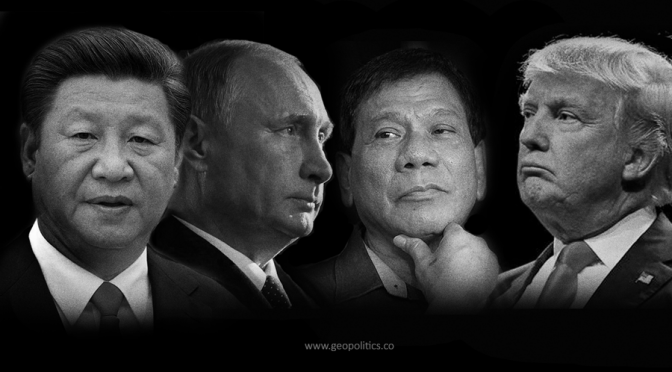 Hindsight is 20/20 vision, but foresight can also be interesting. With that in mind, here’s what to look out for in 2017.

Political predictions are never a sure factor and realities can change within hours. That being said, here are my predictions for what is to come in 2017.
Syria Will Be Free
I believe within six to eight months, operational combat against various terrorist groups in Syria will cease, having been successful. There may still be the odd skirmish but I believe that the Syrian Arab Republic will regain full control of all parts of the country with continued help from Russia, Iran, Hezbollah and others. Russia, Iran and also China will be crucial partners in rebuilding areas devastated by the war.
I am slightly less optimistic about the Trilateral Peace Talks aiding this process, primarily because of Turkish involvement. On this last element, it is best to wait and see.
Peace for Donbass
At the rate Kiev is going and especially with a seemingly unsympathetic Donald Trump soon to enter the White House, Ukraine will not be able to afford to continue the war against the Donbass republics, even though they’d like to. The mercenaries will leave when what’s left of the money runs out, and the already demoralised regular army will mutiny or go AWOL, and Donbass will be left in peace.
I would hope that because of her direct land border with the Russian Federation, the Donbass will ultimately be incorporated into the Russian Federation rather than experience a kind of half-way solution as is the case with Transnistria. It seems like a tall order for now, but with Trump in power, such a thing might be possible and ultimately it is the only long term just solution for Donbass.
Regime Change in Kiev
As per the above prediction, I believe that even the people in western and central Ukraine will soon be fed up with their current crop of fascist and crypto-fascist leaders irrespective of shared hatred for Donbass and Russia amongst the more emboldened Ukrainian radical fringe. There will be regime change and it will not be trouble free. But due to the unstable nature of Ukrainian politics, I have little hope that anyone with sense will take over. Meet the new boss, same as the old boss.
Brexit Will Stall
Brexit may yet happen, but it will be a much longer and more drawn out process than most Brexiteers expect. After 2017, cooler heads may argue for a Swiss style settlement with Brussels for the sake of realism, as both sides are behaving like poorly educated children.
French Presidential election
Le Pen will win by a comfortable margin in the second round.
German elections.
Although Merkel’s CDU will get a bloody nose, I believe she will still be able to form some sort of coalition government as all of her opposition are still too weak.
Russia
Because Russia’s strength and stability are so high, there is little to say about Russia other than that President Putin and his government will continue to build on the political successes of 2016. There will be no snap elections or anything else politically unpredictable. Sorry, Hillary.
Turkey
Erdogan’s life is not going to be any easier. There may be something worse than a coup in Turkey. There may be a kind of civil war between a combination of Erdogan loyalists, Gulenists, Islamists, Kemalists and Kurds. If this happens, the entire region will be deeply destabilised.
China
China will continue to build alliances in her region. I believe as The Philippines moves closer to Beijing, the South China Sea dispute may be closer to being solved than could have previously been hoped for. I further believe that US-Chinese relations will be better under Trump than under Obama.
Iran
Iran will make surpassingly big economic strides as well as minor but meaningful social reforms, demonstrating that Saudi Arabia and not Iran is the ‘extremist theocracy’ of the region.
Israel-Palestine
I believe the only hope for Israel-Palestine is a Russian held peace conference which may or may not happen. I do not think the conflict will come close to being solved by year’s end. I say so with a heavy heart.
EU
Months after Le Pen’s victory, the EU will have to do a great deal of soul searching. If it is not significantly reformed, its collision course with political mortality may be hastened.
Kurds
I believe that an independent Kurdistan may form in Northern Iraq by year’s end. If Turkey continues to spiral into instability, this makes such a thing far more likely. By contrast, Kurds in Syria will be able to work with rather than against Damascus for some sort of compromised position. As for Kurds in Turkey…see above.
Nagorno-Karabakh
With Russia’s growing importance as a geo-political peace maker and Turkey’s increased instability, I believe that Russia may be able to draft an ultimate solution to the ongoing dispute that will be in the best interests of both Armenia and Azerbaijan. It’s a tall order, but the combination of a south Caucasus which is becoming increasingly reliant on Russia, and recent troubling flair-ups in the conflict, means that a solution should not be put on hold, and Russian proposals can and should be taken seriously by those in the region, in countries like Turkey and Iran, as well as in Yerevan and Baku.
Kashmir
Like with Israel-Palestine I sadly do not see meaningful progress in the Kashmir dispute this year.
http://theduran.com/adam-garrie-predictions-2017/
The newly installed UN Secretary-General Antonio Guterres issued his first address on Sunday where he appealed for peace in the world.

“Peace must be our goal and our guide. All that we strive for as a human family – dignity and hope, progress and prosperity – depends on peace. But peace depends on us.

I appeal to you all to join me in committing to peace, today and every day.
Let us make 2017 a year for peace.”


So, if Donald Trump cooperates with the rest of the world, then we might have a good shot at transforming the planet for the better. China has already extended its hands in peace.

Will The Donald reciprocate?