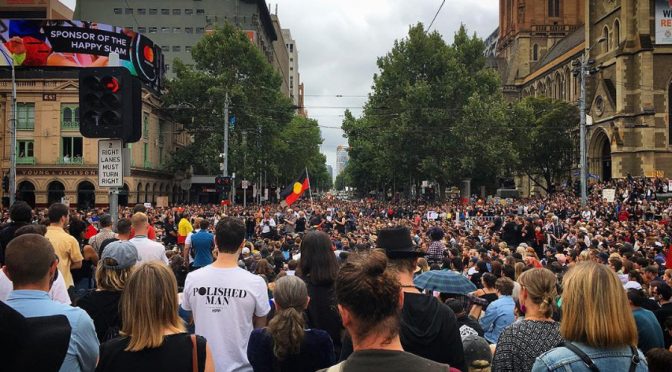 As most of know, the Empire has laid claim to a vast number of territories around the world through its supposed discovery thereof, while effectively ignoring the fact that those lands were already occupied for millennia, i.e. long before they arrived.

Australia Day is the official National Day of Australia. Celebrated annually on 26 January, it marks the anniversary of the 1788 arrival of the First Fleet of British Ships at Port Jackson, New South Wales, and the raising of the Flag of Great Britain at Sydney Cove by Governor Arthur Phillip. – Wikipedia

Later on, the invaders started sharing a new culture and language to the very hospitable inhabitants in order to justify their benevolent occupation that would only further the latter’s subjugation as the indigenous identity is erased.
It’s good to know that Australians have recognized that there’s indeed no pride in genocide.

Australia: ‘No pride in genocide’ – 50,000 march in Melbourne for ‘Invasion Day’ https://t.co/VaL49JL9Ku pic.twitter.com/QMOpko7l4s

Police have cracked down on flag-burning protesters gathered in Sydney for ‘Invasion Day’ – an event to protest Australia Day, which is celebrated on January 26.
Thousands of people across Australia have joined indigenous people to protest the celebrations.

The protester who initially tried to set the flag on fire, 20-year-old Indigenous Australian death metal singer Birrugan Dunn-Velasco, has been taken to the police station.
A woman was injured in the protest and was taken to the hospital, ABC News reported.
Protesters marched through central Sydney, calling on the government to change the date of Australia Day and chanting: “always was, always will be aboriginal land.”

January 26 is considered a day of mourning by Aboriginal Australians. On that date in 1788, the first British ships arrived in New South Wales.
“We have been mistreated, slaughtered and beaten down since the day, so don’t expect us to be happy little Aboriginals on that day,” Ken Canning, one of the rally’s organizers, told BuzzFeed.

Canning told a crowd that “Australians have woken up” and now realize that Australia Day is a day of mourning for Aboriginal and Torres Strait Islander people.

Indigenous elder Uncle Max Harrison, who came to a special smoking ceremony performed by Aboriginals in Sydney, expressed a milder stance, but also urged Australians to acknowledge what January 26 means for Aboriginals.
“I just hope that the public could understand and look at our cultural day within this day that they call Australia Day,” he said, as cited by ABC News.

Always was, always will be…
Smoking Ceremony at Barangaroo #SurvivalDay #AustraliaDay pic.twitter.com/XVjrl6gTl4

Protests across the country have drawn thousands of people. The Melbourne protest is the biggest, with tens of thousands participating, witnesses say.

What makes me proud to be an Aussie? 50k people in Melbourne protesting #InvasionDay on #AustraliaDay 2017#changethedate pic.twitter.com/oGDjXzQCOG

In Canberra, hundreds of protesters marched from the Aboriginal tent embassy to the doors of Parliament House.
The hashtags #ChangeTheDate, #InvasionDay, and #SurvivalDay have all been trending on social media.

This what our country looks like. Note the black dots that represent recorded massacres of Aboriginal people. #ChangetheDate pic.twitter.com/WWj24TIZiz

It seems, however, that most Australians want their national holiday to stay on the same date. A McNair yellowSquares national poll recently found that 68 percent of Australians felt positive about January 26, 19 percent were indifferent, while seven percent had mixed feelings, compared with the Aboriginal people, 31 percent of whom felt negative, with a 30 percent having mixed feelings.
Asked if the date should be changed, 15 percent of Australians said ‘yes,’ compared to 54 percent of Aboriginals.
Australians chose “barbecue,”“celebration,” and “holiday” as key words describing January 26, while for Indigenous Australians, the three words were “invasion,”“survival,” and “murder.”

Now, that method has been modified to include humanitarian military interventions via the United Nations Security Council impositions of “No Fly Zone” and carpet bombing, and until recently, by the use of paid mercenaries who are eager to sow terror on the target population.