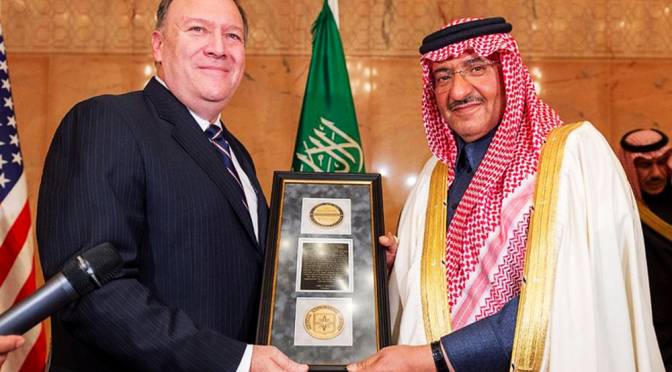 In order to show their undying love for one another, the CIA vested a prestigious award to its long-time financier Saudi Arabia, for all its contributions to the War of Terror in the Middle East, and inside America itself.
In one of the articles posted on this website, UK supposedly financed the WTC 9/11 false flag operation via multiple Saudi Arabian bank accounts.

According to Chicago financial sources, there were major cash transfers from the Extended Custodial Inventory Program, which involves Federal Reserve cash stored in private bank vaults, to other Federal Reserve branches and private banks prior to 9/11. Official internal Fed reports about the surge in cash transfers, which are so rare that there was only one other similar case just after the end of World War II, went ignored by Fed and Bush administration officials.
Specific pre-9/11 cash movements involving one billion dollars originated at the New York Fed and were received by the Miami branch of the Federal Reserve Bank of Atlanta. One of the private banks that received the Fed cash was Riggs Bank’s Miami branch. At the time of the transfer, the President and CEO of Riggs was Jonathan Bush, the uncle of President George W. Bush and Florida Governor Jeb Bush. In 2004, Riggs paid a record $25 million fine for laundering money through accounts held by Saudi Arabia.”

Being a vassal state of the British monarchy, there’s a possibility also that it was the Saudis’ deep pockets that were actually financing the whole thing, but with an expressed instructions from the Imperialists. After it will be the BAE Systems that is one of those who will benefit from the succeeding military invasions into Afghanistan and Iraq.
The Arab Spring saw multiple color revolutions making good of the Khazarian plan for multiple regime changes in at least four of seven targeted countries in the region, “in five years.”

They almost got Syria and Iran, after Libya and Egypt fall into their puppet Muslim Brotherhood, a sprawling umbrella organization of political dissidents and outright terrorists. Incidentally, the ties between the Muslim Brotherhood, Saudi Arabia and Clinton is not to be a surprise.

The Clinton campaign is attempting once again to sweep important questions under the rug about top aide Huma Abedin, her family ties to the Muslim Brotherhood and to Saudi Arabia, and her role in the ballooning Clinton email scandal.
The New York Post ran a detailed investigative piece over the weekend about Ms. Abedin’s work at the Journal of Muslim Minority Affairs from 1995 through 2008, a Sharia law journal whose editor in chief was Abedin’s own mother.
This is not some accidental association. Ms. Abedin was, for many years, listed as an associate editor of the London-based publication and wrote for the journal while working as an intern in the Clinton White House in the mid-1990s.
Her mother, Saleha Abedin, sits on the Presidency Staff Council of the International Islamic Council for Da’wa and Relief, a group that is chaired by the leader of the Muslim Brotherhood, Sheikh Yusuf al-Qaradawi.

No less than the late Pres. John F. Kennedy has described it so succinctly:

“It is a system which has conscripted vast human and material resources into the building of a tightly knit, highly efficient machine that combines military, diplomatic, intelligence, economic, scientific and political operations.
Its preparations are concealed, not published. Its mistakes are buried, not headlined. Its dissenters are silenced, not praised. No expenditure is questioned, no rumor is printed, no secret is revealed. It conducts the Cold War, in short, with a war-time discipline no democracy would ever hope or wish to match.”

Recently, the Trump administration is considering tagging the group as a terrorist organization, something that the Obama administration has been hesitant to do so [here].
Aside from this honor, the head-chopping Saudi Arabia had also been accorded the chairmanship of UN Human Rights Council, in spite of its highly illegal war against Yemen.
Any Western effort to the contrary is met with proportionate retaliation from the House of Saud.

The JASTA bill, which was passed by the Senate on May 17, 2016, triggered fury in Saudi Arabia, expressed both in statements by the Saudi foreign minister and in scathing attacks on the U.S. in the Saudi press.[2] On April 28, 2016, the London-based Saudi daily Al-Hayat published an exceptionally harsh article on this topic by Saudi legal expert Katib Al-Shammari, who argued that the U.S. itself had planned and carried out 9/11, while placing the blame on a shifting series of others – first Al-Qaeda and the Taliban, then Saddam Hussein’s regime in Iraq, and now Saudi Arabia. He wrote that American threats to reveal documents that supposedly point to Saudi involvement in 9/11 are part of standard U.S. policy of exposing archival documents to use as leverage against various countries – which he calls “victory by means of archives.”
Following are excerpts from Al-Shammari’s article:[3]
“Those who follow American policy see that it is built upon the principle of advance planning and future probabilities. This is because it occasionally presents a certain topic to a country that it does not wish [to bring up] at that time but [that it is] reserving in its archives as an ace to play [at a later date] in order to pressure that country. Anyone revisiting… [statements by] George H.W. Bush regarding Operation Desert Storm might find that he acknowledged that the U.S. Army could have invaded Iraq in the 1990s, but that [the Americans] had preferred to keep Saddam Hussein around as a bargaining chip for [use against] other Gulf states. However, once the Shi’ite wave began to advance, the Americans wanted to get rid of Saddam Hussein, since they no longer saw him as an ace up their sleeve.
“September 11 is one of winning cards in the American archives, because all the wise people in the world who are experts on American policy and who analyze the images and the videos [of 9/11] agree unanimously that what happened in the [Twin] Towers was a purely American action, planned and carried out within the U.S. Proof of this is the sequence of continuous explosions that dramatically ripped through both buildings… Expert structural engineers demolished them with explosives, while the planes crashing [into them] only gave the green light for the detonation – they were not the reason for the collapse. But the U.S. still spreads blame in all directions. [This policy] can be dubbed ‘victory by means of archives.’

Saudi Arabia has been cooperating with the West for their common interest in the region, i.e. House of Saud’s oil extraction monopoly and Western profits from sales thereof.
In short, there’s a clear symbiotic relationship between the ruling Arab warlord and the British oligarchy that only an organized external effort could break, in order to end the perennial conflicts in the Middle East, and elsewhere.

In closing, we can ask, is this Trump’s way of saying thank you for all your support to our previous administrations. Now, we’ll start doing it the other way – America First,” i.e. this is a diplomatic overture, a friendly gesture for Saudi Arabia to cut funds to Al-Qaeda. While at the same time, sending a message to Iran: “We are going to renegotiate the nuclear deal with you, and if you don’t work with us we might support the Sunnis, the Wahhabis led by Saudi Arabia.”
Indeed, there are so many possibilities. But, if we try to see how the Chief Strategist Bannon, and Nation Security Advisor Flynn [resigned a few hours ago] have been persistently being demonized by the mainstream media, a good indicator that the Khazarians are in panic, there’s certainly a good reason to be positive about it, as Flynn would just go underground from here on.
Still, we have to look at what’s going to actually happen in the next few months.