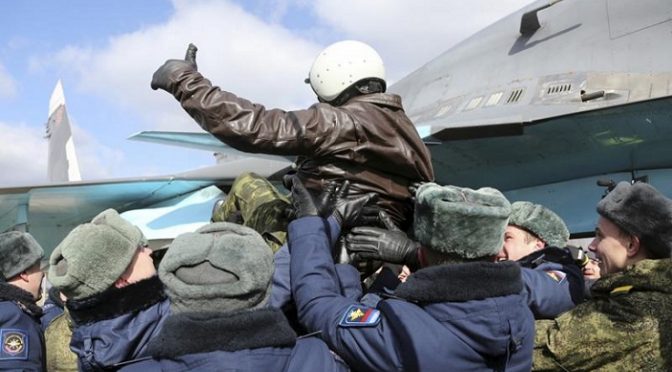 The withdrawal of Russian military forces from parts of Syria and its consequences caused numerous responses in the political and media circles of the Middle East.
Yahya Al-Aridi, the official representative of the Syrian opposition at Geneva-8 peace talks, announced in this respect that the opposition welcomes any step contributing to the reestablishment of peace in Syria.
The Arab authors had noted that Putin’s stay at the Khmeimim air base became the first visit to Syria by a president of a foreign country for the last seven years, starting with the crisis in 2011. This is the testament to the real political-moral victory of the authorities and the people and opens the door to secure visits to Syria for the leaders from other states, thus overcoming different sorts of phobias in relation to President Bashar al-Assad.
The Arab media outlets emphasise the significance of the withdrawal of the Military Police of Russia from the Syrian Arab Republic, which by agreement participated in the operation on tracking the zones of de-escalation of tensions. This decision knocks the sand from under the justification of presence for the foreign military troops, in particular, in the north of Syria, especially the American ones and makes such presence unlawful.
As per the words of Al Jazeera, in the light of the recent demarches of Moscow, the positions of the USA on the diplomatic front are becoming even more ‘marginal’. During the last year, Geneva was more frequently replaced by Astana, where Turkey acts, supporting separate groups of militants, together with Russia and Iran – the allies of Syria.
Whereby this decision allows Moscow to ‘route’ the path for negotiations during the peace talks within a broader context, noting that those powers were once partners of America.
As it seems, the foes of the Syrian Arab Republic were taken aback by this step of Moscow. To openly hold against it would mean to take the side of the opponents of any peaceful settlement and associate themselves with the American calculations.
However, it is quite challenging to do so, bearing in mind the ‘explosion’ of indignation and anger that the whole Arab, as well as Muslim world is overwhelmed with, in the light of Donald Trump declaring formal recognition of Jerusalem as the capital of Israel and its decision move the embassy there.
The Qatar daily newspaper ‘Al Sharq’ in its article entitled ‘War of civilisations after the piracy in relation to Jerusalem’, writes that the decision of the ‘owner’ of the White House risks leading to a real earthquake in this region. Many are in anticipation pending a regional political crisis to be grown into ‘a universal war’ based on religious affiliation.
The success that have been demonstrated by President of the Russian Federation Vladimir Putin during his brief visit to Khmeimim became a sort of strong signal to the governments and the people of the region.
It is all about the Russian Federation announcing to the world of its new international concept as to “how skilfully combine the diplomacy resting upon the military assistance”, says the prominent Arab politologist and media activist Abdel Bari Atwan.
As per the opinion of several observers, the involvement of Russia into the Syrian affairs is motivated not by certain expansionist ideas of one single person; it is natural and logical. They point at the critical importance for Moscow of Syria and the neighbouring countries through the lens of geography, their location at the southern ‘underbelly’ of Russia. Therefore, any ‘toxicity’ in this region will spread quickly and reach the borders of the Russian Federation. There is no such peril for the USA. It is all tied up politically and economically, in the relations with Israel, in oil and money from the Gulf and in profitable contracts (including arms sales).
Yury Zinin, Leading Research Fellow at the Moscow State Institute of International Relations (MGIMO), exclusively for the online magazine “New Eastern Outlook.”