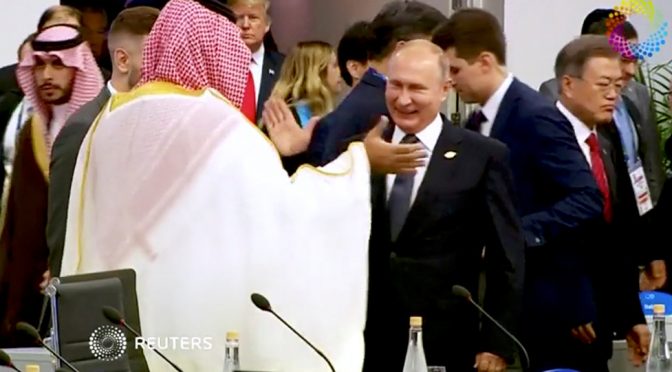 The gleeful greetings that Vladimir Putin extended to Saudi Crown Prince Mohammed bin Salman has caught, not just the mainstream media, but also Donald Trump and the rest of the global geopolitical observers. It was a pleasure indeed to see Putin smiling as if he has won a jackpot about something.
The thing is: both leaders have been the subject of multiple false flag operations by Deep State operators aiming to undermine their respective geopolitical influence in their respective regions.
In the case with MBS, his rule was threatened earlier by the Deep State murder of journalist Khashoggi inside the Saudi embassy in Turkey, while Putin’s resolve was tested by the Deep State stooge Ukraine dictator Poroshenko, when the latter sent rusty frigates into the Kerch Strait to provoke a Russian response that will provide a pretext for more US-EU acoustical offensive.
Both leaders, of course, have willfully repelled these offensives, not to mention the long streak of high gas and oil prices some weeks ago, and how fitting it would be than to celebrate their shared victory among the losers in the room.

Find someone who's as happy to see you as Putin is greeting Saudi Crown Prince MBS pic.twitter.com/fZ1TQAi342

As proof that we were right all along when we said that the Khashoggi false flag murder was meant to force Saudi to buy more arms from the Deep State military industrial complex, no less than Trump boasted about the planned Saudi installation of a THAAD system.
As some of you might know already, all Middle Eastern warlords are required to feed the petrodollar system with their cheap oil, and regular purchases of arms from the Western war industrialists, lest they’ll be subjected to a regime change operation like what happened with Muammar Ghadafi and Saddam Hussein before him.
But why is MBS doing a high five with Putin while Trump looks on? Are they both just fooling around with Trump? Will Saudi really buy US THAAD or Russian S-400?
Or, is Trump in it, too?
But the latter case is too far fetched considering that Trump is now focusing more on his Art of the Deal with Art of War Master Xi Jinping.
And GM’s latest announcement of laying off workers in the US only worsens his position across the negotiating table, thereby threatening the man’s conviction to make America Great Again.


Donald Trump’s dilemma was nowhere clearer than in the APEC Summit in Singapore a few days ago, where Putin pulled his ace with Japan pertaining to the long contested Kuril Islands…


All of the above shows who’s got the upperhand in the battle for the minds and hearts of the world leaders, as the move towards multipolarity continues to gain ground around the globe.
All of the above is why Donald Trump cancelled his meeting with geopolitical grandmaster Putin, hours before the G20 Summit kicked off.


This drama, of course, will strengthen Trump’s position against the Deep State mainstream media back home, as those attacks were all based on the Putin-Trump collusion narrative.
For Putin, Kiev’s Poroshenko just handed him the best pretext to install S-400 SAM system into Crimea in much similar fashion, although less bloody, as Bibi Netanyahu’s aerial acrobatics months before.
As an aside, another loser at the G20 Summit in Argentina is France’s Macron, who had to endure the humiliation of having no one to welcome and greet him and his wife, but the ground crew at the airport.