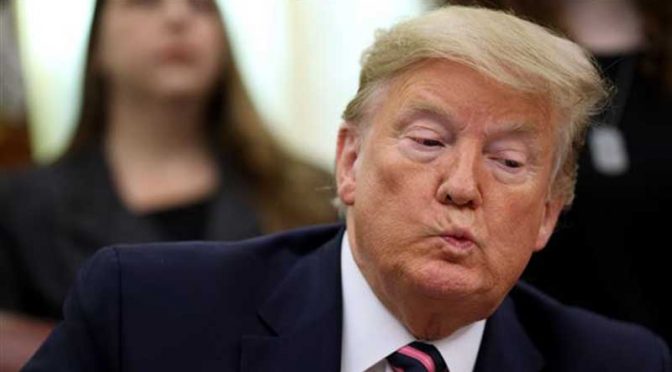 US President Donald Trump placed an advance order to purchase 10,000 copies of a book about his presidency titled “A Very Stable Genius,” days before aides realized that the title is sarcastic.

“The president had planned to just hand out the copies — to family, friends, visiting world leaders — as a testament to his cognitive aptitude,” said an unnamed US administration official familiar with the episode at the White House. “Although he had no plans to read it, personally.”

“It was not until after book reviews came out that people around the president realized the book is not flattering, unlike what the title purports,” the official said.

The book, by two Washington Post journalists Philip Rucker and Carol Leonnig, is due in book stores on January 21. It has been presented as a meticulous account of Trump’s three years in office as president of the United States, and eager advance orders have already helped it skyrocket to the top of Amazon Books best-seller’s list.

The administration official said the realization about the title had had a big impact on Trump.

“The president had been anticipating what he thought would be the first-ever complimentary account of his presidency,” the official said. “He was dumbfounded when he learned otherwise, and he hasn’t been talking to anyone since.”

In her first press briefing on Friday, White House Press Secretary Stephanie Grisham confirmed that the White House now knew of the sarcasm used in the title of the book.

“We know, and the president knows, the title of the book is a play on words,” Grisham said.

But she parried questions about how Trump could have believed a book would call him a “genius,” or more curiously, “very stable.”

“I think it’s enough to say that the authors and/or publisher played a dirty marketing trick here. To call President Trump something that he isn’t in the hopes of making more sales is less-than-clever,” Grisham said.