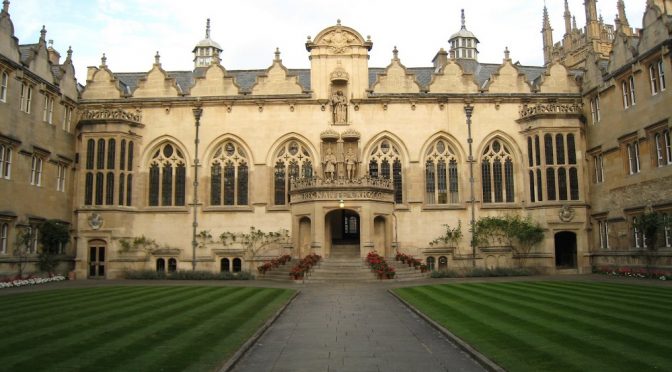 Freedom of Information requests submitted by Cherwell have revealed that Oxford University accepted at least £726,706 from the Atomic Weapons Establishment (AWE), the designer and producer of the UK’s nuclear warheads, during the years 2017-19 alone.

The majority of this money was awarded to the Oxford Centre for High Energy Density Science (OxCHEDS), which advertises AWE as one of its “national partners” on its website.

AWE’s funding is mostly used by OxCHEDS to fund individual research projects and studentships, with a substantial portion (£82,863 in 2019) funding the department’s William Penney Fellowship, named after the head of the British delegation for the Manhattan Project and ‘father of the British atomic bomb’.

According to the AWE website, William Penney Fellows “act as ambassadors for AWE in the scientific and technical communities in which they operate”.

This fellowship is currently shared by two professors, Justin Wark and Peter Norreys, both of whom collaborate closely with US state laboratories that develop nuclear weapons, the Lawrence Livermore National Laboratory and the Los Alamos National Laboratory.

AWE donations have also funded projects at the University’s Departments of Chemistry, Engineering, and Physics, a number of which are directly linked to the design of nuclear weapons.

One AWE-funded paper, published in 2019, investigated fusion yield production, a vital way of testing the destructive power of a warhead prior to manufacturing, whilst another project researched methods used by nuclear weapons designers for simulating the interior of a detonating warhead.

This research also has civilian applications, and does not in itself point towards the development of nuclear weapons. A spokesperson from Oxford University stated: “Oxford University research is academically driven, with the ultimate aim of enhancing openly available scholarship and knowledge.

All research projects with defence sector funding advance general scientific understanding, with a wide range of subsequent civilian applications, as well as potential application by the sector.”

However, AWE is not a civilian organisation. As Andrew Smith of Campaign Against the Arms Trade told Cherwell, “the AWE exists to promote the deadliest weaponry possible.

It is not funding these projects because it cares about education, but because it wants to benefit from the research and association that goes with it”. Mr. Smith concluded:

“Oxford University should be leading by example, not providing research and cheap labour for the arms industry”.

Responding to Cherwell’s findings, Dr Stuart Parkinson, Director of Scientists for Global Responsibility, described Oxford University’s ties with AWE as “shocking” and called for the work to be “terminated immediately”. He said that the findings “point very clearly to Oxford University researchers being involved in the development of weapons of mass destruction”.

In the face of this criticism, the University spokesperson claimed:

“All research funders must first pass ethical scrutiny and be approved by the University’s Committee to Review Donations and Research Funding. This is a robust, independent system, which takes legal, ethical and reputational issues into consideration.”

However, there are growing concerns over the ethics and efficacy of this process, which has seen controversial donations from the Sackler family, Wafic Saïd, and Stephen Schwarzman given the green light despite internal and public protests.

The committee’s deliberations are frequently subject to Non-Disclosure Agreements, meaning that they are not accountable to members of the University and to the wider public.

Moreover, Freedom of Information requests submitted earlier this year revealed that the committee accepts over 95% of the funding it considers, with congregation members describing the committee as a “smokescreen” and a “fig leaf”.

In recent years, the University has faced increased opposition from student groups such as the Oxford Climate Justice Campaign and Oxford Against Schwarzman over the companies Oxford chooses to affiliate itself with through investments and donations.

From this term onwards, a newly formed student group, Disarm Oxford, will be campaigning against the University’s numerous ties with the arms industry. Oxford Amnesty International is working with Disarm Oxford on the global Campaign to Stop Killer Robots, and to strive for the disarmament of the University more broadly.

Dr Rowan Williams, the former Archbishop of Canterbury and Chair of the Trustees of the Council for the Defence of British Universities, told Cherwell:

“The recent publicity around university divestment from fossil fuels has highlighted the need for university bodies to be transparent about the ethical standards they apply to their funding, and it is encouraging to see this crucial question being raised also in the context of armaments-related funds and research.”

The combination of Brexit and the coronavirus pandemic has created a particularly difficult time for university research finances. In a marketised higher education system, seeking and welcoming money from industry partnerships seems like an inevitability. However, while some industries rely on academic research to save lives, others are predicated on taking them.

With the UK confirmed this year as the world’s second biggest exporter of arms, the University’s significant ties to the development of weaponry has an alarming global significance which is now beginning to be called into question.

The original source of this article is Cherwell Copyright © Ben Jacob, Cherwell, 2020