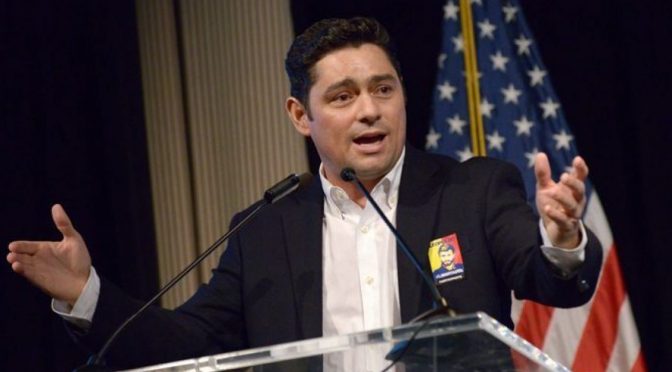 After condemning the pro-Trump invasion of the Capitol, the incoming Biden administration invited Carlos Vecchio – a coup leader charged in the 2014 torching of the Venezuelan Attorney General’s office – to its inaugural ceremony.

As Washington recovered from shock and outrage caused by pro-Trump hooligans storming the United States Congress – breaking windows, smashing doors, and intimidating police officers in order to push their way inside – a sense of pre-inaugural excitement began to sweep the nation’s capital.

While heavily armed National Guard troops descended onto Washington’s streets to set up check-points, construct fences around government buildings, and establish their military presence, news about the upcoming swearing-in ceremony began to trickle out in the media.

Lady Gaga was booked to belt out the National Anthem, while Jennifer Lopez, John Legend, Bruce Springsteen, and a host of other Democratic Party-aligned pop artists were scheduled to perform throughout the day. Former Trump cabinet members, including Vice President Mike Pence, Supreme Court Justices, and lawmakers were all expected to attend, though the National Mall would be closed to the general public.

Beyond entertainers and high-level federal officials, foreign dignitaries were invited to join a smaller-than-usual group of individuals permitted to witness the day’s festivities. Among those dignitaries is Carlos Vecchio, a former Exxon lawyer who currently serves as US-recognized “Interim President” Juan Guaidó’s envoy in Washington.

When the Trump Administration initiated a coup against Venezuela’s government in January of 2019, Vecchio became Guaidó’s ambassador, and has risen to prominence as the de facto leader of a US-based exile lobby dedicated to toppling Venezuela’s UN-recognized government.

The Biden team’s decision to invite Vecchio was a disappointing sign to those hoping the new administration would break from Trump’s failed and destructive policy of recognizing Guaidó as Venezuela’s leader. In the two years since Washington appointed the previously unknown opposition figure to lead its attempt at regime change, Guaidó has failed to rally public support in Venezuela or gain control of any government ministry. The country’s military remains loyal to President Nicolás Maduro and the United Nations still recognizes the Maduro government’s authority.

Beyond giving the appearance that Biden will continue the Trump Administration’s doomed Venezuela policy, Vecchio’s presence at the presidential swearing-in ceremony was filled with irony. In the days following the Capitol riot, Biden and his allies have denounced the violent takeover of Congress as an assault on democracy, with the incoming president himself declaring the rioters to be “domestic terrorists.”

Yet Carlos Vecchio, the Guaidó ally with a fresh ticket to Biden’s inauguration, is responsible for leading his own assault on his home country’s democracy – and is currently wanted in Venezuela for inciting a violent attack on the Attorney General’s office in Caracas. https://platform.twitter.com/embed/index.html?dnt=false&embedId=twitter-widget-0&frame=false&hideCard=false&hideThread=false&id=1350997723672150018&lang=en&origin=https%3A%2F%2Fwww.globalresearch.ca%2Fbiden-inaugural-guest-venezuelan-coup-leader-charged-inciting-violent-assault-govt-building%2F5734934&theme=light&widgetsVersion=ed20a2b%3A1601588405575&width=500px

See what Vecchio’s charged for here, it might seem familiarhttps://t.co/S3nJHdccrk pic.twitter.com/zb6umY3WJ4

On February 12, 2014, right-wing opposition leader Leopoldo López led a feverish rally of his supporters in the heart of Venezuela’s capital, Caracas. For over a month, López and his political allies had been holding demonstrations aimed at overthrowing newly-elected president Nicolás Maduro, who came into office following snap elections held in the aftermath of Hugo Chávez’s death.

Carlos Vecchio, the corporate lawyer who went on to represent Juan Guaidó in Washington, also spoke at the demonstration, and stood loyally by López’s side as he delivered his incendiary speech calling for an angry march to the Attorney General’s office, and whipping the crowd into chants of, “No fear! No fear!”

López’s supporters heeded his call and charged straight for the office of Venezuela’s Public Prosecutor, eventually setting the building on fire. Columbia University’s Global Freedom of Expression project concededthe mayhem “resulted in the death of two people and considerable damage to public property.”

López and his allies, including Vecchio, were charged for their role in inciting the destruction. López was eventually sentenced to 13 years in prison for his actions, while Vecchio fled to the United States to escape “incitement of violence” charges.

The attack on Venezuela’s public institutions in February of 2014 mirrored events that would take place in Washington DC roughly six years later, when President Donald Trump delivered a speech on the White House eclipse instructing his supporters to march to the Capitol as lawmakers voted to cerity his election loss. Within minutes of arriving at Congress, Trump’s followers overwhelmed the meager crowd of police deployed to protect the legislature and forced their way inside – unafraid to shatter doors and windows as they did so.

Following the violent breach of the Capitol, incoming president Joe Biden characterized the mob’s actions as “an unprecedented assault on our democracy, an assault literally on the citadel of liberty, in the United States Capitol itself” and “an assault on the rule of law.” Democrats in the House of Representatives quickly moved to impeach Trump, charging the president with “incitement of insurrection.”

In light of their outraged response to the Capitol raid, which they branded an act of illegal insurrection, Biden and his allies might be sympathetic to the Venezuelan government, which similarly moved to charge López and his co-conspirators, including Vecchio, for their role in encouraging a blitz on government buildings after the country’s Attorney General’s office was torched by a politically-charged mob.

The violent actions of Vecchio and his allies were hardly limited to the events of February 12, 2014. The chaotic demonstrations they led lasted until May of that year, resulting in the deaths of 49 people and roughly 10 billion dollars in damage. Regime change rampages by Venezuela’s opposition have featured assaults on journalists, the construction of barricades manned by vandals, and the burning to death of political opponents.

For his part, Juan Guaidó has led two failed campaigns of violent insurrection against Venezuela’s government. In April of 2019, he called for an uprising against President Maduro while a group of a few dozen soldiers launched an attack on the La Carlota Air Base in Caracas. While the rebellion failed to generate popular support, López was broken out of house arrest during the day’s events, leading to his eventual exile in Spain.

Roughly a year later, Guaidó was exposed at the center of yet another coup plot when former U.S. Green Beret Jordan Goudreau accused the politician of contracting his services to carry out a botched capture or kill operation targeting President Maduro. Goudreau, who previously provided private security for Trump campaign rallies, produced a contract containing Guaidó’s signature along with a voice recording of Guaidó allegedly discussing the deal though Guaidó himself has denied involvement.

Biden and the Democrats reacted with indignation when the U.S. Capitol was breached for just one afternoon, immediately initiating Trump’s second impeachment by the House of Representatives. Within days, the Capitol was surrounded with unscalable fencing and 25,000 National Guard soldiers were summoned to occupy central Washington DC – more than three times the amount of troops deployed to Iraq, Syria, and Afghanistan combined.

It would be instructive to imagine how Democrats would have responded if Trump or his supporters attempted anything like the years-long campaign of insurrection by Venezuela’s opposition – and did so with the full-throated support of a foreign power. What if Trump supporters had set up barricades around Washington DC, preventing residents from leaving or entering their own neighborhoods? What if they had lit the Supreme Court on fire and bombed it from the air in a stolen military helicopter? And how would Democrats have reacted if Trump had contracted foreign mercenaries to capture or kill Biden?

Anyone troubled by these hypothetical scenarios should be equally disturbed that Carlos Vecchio, a veteran coup leader allied with seditious forces in his home country, will be present at Biden’s inauguration on January 20.

In the lead up to the House vote on President Trump’s impeachment, on January 11, U.S. Senator Dick Durbin tweeted, “The President and his Republican enablers incited a violent mob into storming the Capitol… This was an assault on our democracy, our national security, and our Constitution. There must be accountability, including impeachment.”

Hours later Durbin took to Twitter again to boast of his meeting with incoming Secretary of State Anthony Blinken, saying the two discussed “his plan for the State Department in the Biden Administration.”

According to the senator’s office, Durbin explicitly advocated the Biden administration preserve support for Juan Guaidó, whom he described as Venezuela’s “Interim-President.”

We thank you @SenatorDurbin for addressing with the nominee for US Secretary of State @ABlinken the critical situation of Venezuela, the actions to restoring democracy hijacked by Nicolas Maduro’s dictatorship, and the necessary support to the Venezuelan people. https://t.co/IUTNVPbTI7

“We thank you Senator Durbin for addressing with the nominee for U.S. Secretary of State Anthony Blinken the critical situation of Venezuela, the actions to restoring democracy hijacked by Nicolas Maduro’s dictatorship, and the necessary support to the Venezuelan people,” Vecchio tweeted in response to news of the conversation.

Anya Parampil is a journalist based in Washington, DC. She has produced and reported several documentaries, including on-the-ground reports from the Korean peninsula, Palestine, Venezuela, and Honduras.