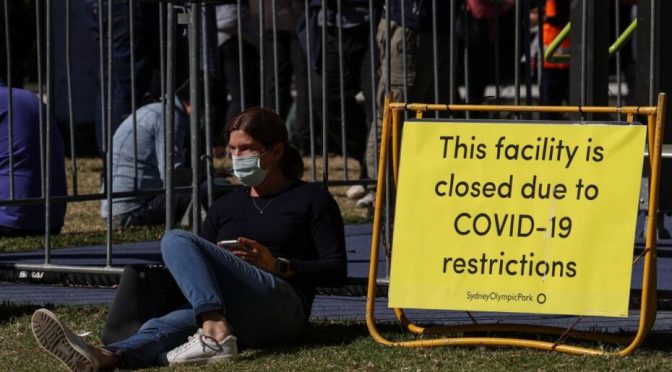 The land Down Under appears to be reverting back to its original status as a penal colony as government officials, looking more like prison wardens than any servants of the people, clamp down on demonstrators weary of more Covid lockdowns.

A heavy police presence in the major Australian cities on the weekend didn’t stopped thousands of protesters from taking to the streets in what many saw as a last-ditch effort to protect their severely threatened liberties and freedoms.

The protests came after New South Wales announced its second extended lockdown, which puts Sydney’s 5 million residents under strict curfew conditions until mid-September. The wait will seem all the more excruciating, however, as rumors are flying that the shelter in place orders may be extended all the way until January.

Meanwhile in Melbourne, Australia’s second largest city behind Sydney, citizens face similar restrictions, which mean that – aside from going shopping within a designated radius from their homes, exercising for an hour a day outdoors, and going to work so long as they are engaged in “essential employment” – have essentially become prisoners inside of their own homes.

At this point in Australia’s history, the only thing that remains certain is the uncertainty, which makes the lockdowns all the more unbearable.

Images from Australia’s two major cities on Saturday showed powder keg conditions as demonstrators squared off against police, who responded with batons, pepper spray and mass arrests (It will interesting to see if Big Media describes the police actions against the lockdown protesters in the same compassionate way it described the actions taken against Australia’s very own Black Lives Matter protests around the same time last year. As the Guardian sympathetically reported: “At least 20,000 attended the Sydney [BLM] march which passed off peacefully, except for ugly scenes when police officers used pepper spray on protesters who had flowed into Central station after the rally finished.” It will be advisable not to hold your breath). In live footage obtained by Facebook user ‘Real Rukshan,’ large groups of police are seen confronting individual citizens, seemingly guilty of nothing else aside from just being there.

In one scene (at the 2:10 marker), an elderly man who appears to be leaving a Starbuck’s coffee shop is surrounded by no less than five police officers, who proceed to handcuff the man and, presumably, take him to prison. In another scene (at the 0:30 mark), two men are seen standing in front of the Bank of Melbourne confronted by six officers. In front of them on the street are four mounted officers astride anxious horses. The feeling conjured up in these incidences is the same: authoritarian police-state overkill.

Given the massive police presence amid the steady deterioration of basic human rights a person might get the impression that Australia is really dealing with an existential crisis. While that may be true with regards to obesity, drug abuse and homelessness, it seems to be a real exaggeration when it comes to Covid-19. After all, while evidence of the above mentioned scourges is visible everywhere in the country, the only place the coronavirus seems to exist in Australia is on the nightly news channels (which, by the way, have done a very poor job of keeping their audiences up to date on latest developments. Sources in New Zealand, for example, have informed that the media there has largely ignored the story of anti-lockdown protests happening just across the Tasman Sea).

For example, New South Wales Premier Gladys Berejiklian, in an effort to portray the pandemic as enemy number one, expressed from the boob tube her “deepest, deepest sympathies” to the families of three people who died overnight from/with the coronavirus. Who were these fatalities? The public was not informed of their identities, but Berejiklian described them as “a man in his 80s, and a man in his 90s, and a female in her 90s.”

It’s just a hunch, but could the comorbidity in each of those “tragic” cases have been that silent killer popularly known as ripe old age? Yes, every life is precious and worth saving, but is Australian officialdom secretly shooting for absolute immortality among the population and not just prevention? That would certainly be the height of irony if true considering that the effort is killing just about everyone. In fact, it seems that the real pandemic attacking the Australian people is government-sponsored fear.

Meanwhile, Victoria Premier Daniel Andrews added insult to injury when he commanded from his bully pulpit that citizens, now deprived of their favorite drinking holes to while away the jobless hours, were forbidden from removing their masks to drink alcohol in the great outdoors. As to whether the consumption of a non-alcoholic beverage outdoors would also fall within the tight confines of the mask regime, dear leader did not say. However, the answer seems pretty clear since the state is actually using police helicopters to shoo away sunbathers from the nation’s many famous beaches.

All of this insanity has befallen the people Down Under after the continent has witnessed the barest uptick of Covid cases. In the state of New South Wales, for example, where Sydney is located, there were just 825 acquired infections reported on Saturday, an increase from the 644 the day prior. In the state of Victoria, home to Melbourne, the situation appears even less worrying, with just 61 cases reported as of Saturday. These low infection rates, taken together with a high level of public skepticism with regards to the safety of the Covid vaccines, translates into just 29 percent of the population opting to be jabbed to date.

So as the petty tyrants Down Under seem more concerned with getting every single Australian citizen the Big Pharma jab – together with the lifetime of booster shots and lockdowns that will certainly follow – the populace is more concerned about how to save their collective health, sanity and jobs. That’s no easy task when the police give a hard time even to people who are found to be walking their dogs without a face mask on. These days even man’s best friend seems to have it better than the people struggling to survive Down Under.