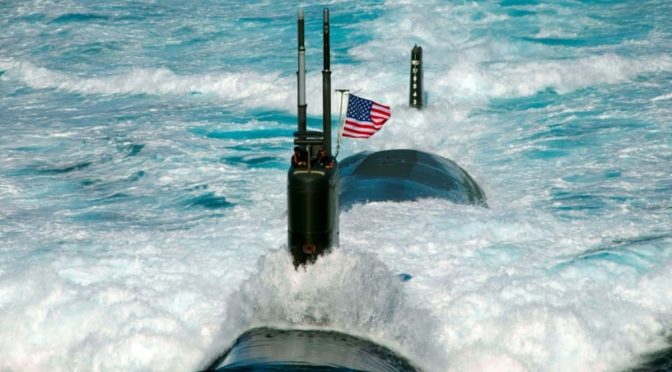 US-Australia nuclear submarine deal is part of a wider alliance-based strategy to counter and contain China’s rise and ambitions.

The Indo-Pacific’s Cold War is heating up as the region splits ever more decisively into opposed camps with a loose alliance of US-led democratic powers on one side and authoritarian China and its aligned satellites on the other.

And the first economic salvos of the contest launched by Donald Trump’s trade war are becoming more militarily provocative under Joe Biden.

The escalating contest took a game-changing turn last week when the US and Britain announced they will provide Australia with the technology and capability to develop and deploy nuclear-powered submarines in a new trilateral security arrangement that will put more pressure on China’s contested claims in the South China Sea and other maritime theaters.

The nuclear submarines will tilt the region’s strategic balance and potentially cause China to concentrate more of its security energies closer to home and less so on far-flung theaters. From that perspective, the submarine deal is part of a coordinated encirclement strategy that Beijing will certainly view as a threat to its plans to increase and strengthen its presence in the Indian Ocean region.

Meanwhile, the US and India signed a new agreement on July 30 to jointly develop Air-Launched Unmanned Aerial Vehicles (ALUAV). The deal is the latest under the Research, Development, Testing and Evaluation Memorandum Agreement between India’s Ministry of Defense and the US Defense Department first signed in 2006 and renewed in 2015.

A September 3 statement describes the deal as yet another step towards “deepening defense technology collaboration between the two nations through co-development of defense equipment.” Needless to say, the target of the deal is China.

Just as provocatively, US ally Japan is now staging its largest military drills since 1993, separately but hardly by coincidence at the same time Taiwan has launched a new major military exercise known as Han Kuang to strengthen combat readiness in the event of a Chinese attack.

China considers self-governing Taiwan a renegade province that must be “reunified” with the mainland, a seizure Chinese President Xi Jinping has indicated is a near-term priority. Taiwan’s incorporation into the mainland would undermine the US’ strategic advantage in the Indo-Pacific, making the island a strategic center point of the new Cold War.

China was not explicitly mentioned as a target in any of the recent deals, tie-ups and exercises. Indeed, Biden administration officials who briefed reporters after the nuclear sub announcement said specifically that the new trilateral partnership “was not aimed at countering Beijing.” The US-India deal was likewise announced without mentioning China.

But there is no mistaking that Biden is actualizing his vow to build alliances of so-called like-minded powers to tackle and confront China’s rise. That alliance-building will be underscored at Quadrilateral Security Dialogue, or Quad, meeting at the White House in Washington on September 24.

The Quad, a strategic tie-up of the US, Australia, Japan and India, is in China’s crosshairs. The Global Times, a Chinese Communist Party mouthpiece, ran a September 15 editorial headlined “Quad summit will see limited concrete outcomes as US, Japan, India, Australia are ‘four ward mates with different illnesses’: experts.”

The commentary said, “the summit will make no big chance [SIC] in its hostility against China, though the statement released by the White House about the summit didn’t mention China.”

Lü Xiang, a specialist in US studies at the Chinese Academy of Social Sciences and one of the Global Times’ cited “experts”, spoke to contradictions and weaknesses in the Quad: “The US hasty pull-out from Afghanistan caused huge loss to India; Australia refused to make promise on coal mining for the climate change issue; Japan is now facing a chaotic political situation, and is being unwisely provocative toward China due to the Taiwan question.”

The Global Times has it right from one perspective: “hostility against China” is rising precisely due to Beijing’s increasingly assertive moves in the Indian and Pacific Oceans, an outward thrust that the Biden administration and its allies are broadly countering in the name of maintaining a “free and open Indo-Pacific.”

The shift in US strategic perspective from fighting terrorism to countering China is open and clear. US Vice President Kamala Harris renewed that pledge during a visit to Singapore and Vietnam in late August literally coincident with America’s withdrawal from Afghanistan, where she said the US “will pursue a free and open Indo-Pacific that promotes our interests and those of our partners and allies.”

Like the Global Times, Harris did not mince words when she said “In the South China Sea, we know that Beijing continues to coerce, to intimidate and to make claims to the vast majority of the South China Sea” [and] “Beijing’s actions continue to undermine the rules-based order and threaten the sovereignty of nations.”

After four years of what many viewed as four years of neglect, mixed messaging and miscues under former president Donald Trump, the US under Biden is making clear the US’ renewed commitment to the region.

US ally Britain is also back in the region in a muscular manner not seen in decades. A strike group led by aircraft carrier HMS Elizabeth sailed through the South China Sea in route to Japan in July, a freedom of navigation flex that elicited a strong response from China.

Britain “is still living in its colonial days”, fumed Global Times’ columnist Lin Lan on July 26 while taking shots at issues unrelated to the aircraft carrier’s voyage in China’s nearby waters.

“While Britain is trying to show off its strength, its own problems are acute. On July 14, a Covid-19 outbreak was reported on the HMS Queen Elizabeth and around 100 cases were confirmed…Besides, the UK’s economy has fallen into recession and about one-fifth of UK pensioners are living in poverty, according to an analysis of government figures in June.”

The Global Times also shot at Japan’s recent military exercise. Columnists Yang Sheng and Liu Xuanzun wrote on September 15: “Right-wing political forces in Japan have been lying to the Japanese public about the essence of the Diaoyu Islands issue [disputed islands in the East China Sea] and Taiwan question.

“Now the Japanese public holds unreasonable hostility and bias against China, and this is why the massive drills targeting China could win support for Japanese politicians.”

Their comments were punctuated with what could be construed as a veiled warning from Beijing: “But to what extent Japan would intervene militarily, the US has the final say … China is prepared for the worst-case scenario — the US and its allies, including Japan, launch an all-out military intervention to interrupt China’s national reunification.”

But China’s leadership has been doing more than printing provocative articles in their mouthpiece aimed at international audiences.

In a sign of China’s wider global ambitions, Beijing recently built a 330-meter-long pier large enough to accommodate an aircraft carrier at its naval base in Djibouti, China’s only foreign military base strategically located at the southern entrance of the Red Sea.

From there, China’s navy can readily monitor traffic to and from the Suez Canal — and collect vital intelligence from the entire region. At least 2,000 Chinese navy personnel are present at the Djibouti base, which has been expanded gradually since it was opened in August 2017.

To be sure, China’s move into the Indian Ocean makes strategic sense. Christopher Colley, a security analyst writing in the Washington-based War on the Rocks, recently noted:

Japan and Australia, which also see less benign motives behind China’s interest in the Indian Ocean, could be added to that list.

Its newly established presence has unmistakably shifted the huge and strategically important ocean’s security dynamics to their mutual detriment, particularly as China projects power through two aircraft carriers, the Liaoning and Shandong, with a third under development.

China’s increasing assertiveness in the Indian Ocean has been seen in the growing presence of Chinese survey ships and submarines. In January, the Paris-based Naval News website reported that Chinese ships “have been carrying out a systematic mapping of the [Indian Ocean’s] seafloor. This may relate to submarine warfare.”

That echoes a 2020 US Department of Defense report that said the Chinese navy may have an Indian Ocean fleet “in the near future.”

Image on the right: The 16th installment of the China navy escort fleet conducts a two-ship alongside replenishment in the eastern waters of the Indian Ocean in a file photo. Photo: Twitter

The Chinese obviously want to protect their economic and therefore strategic interests in the Indian Ocean, not least their crucial fuel imports from the Middle East, but it is also clear that China has wider strategic ambitions to challenge the US as the world’s leading military superpower.

“Although China’s ultimate aims in the Indian Ocean remain somewhat ambiguous, it is clear that the Chinese leadership is actively pursuing capabilities that would allow it to undertake a range of military missions in the region,” said a Brookings Institution think tank report from last year.

The Australian nuclear submarine deal, US-India drone deal and rising Quad meetings and operations should all be viewed from the perspective of China’s perceived expanding threat, a multi-pronged strategy driven by multiple aligned actors to encircle and contain Beijing’s global ambitions.

While the US and its allies cloak many of these moves in euphemisms about “freedom”, “liberty” and “democracy”, the battle lines are being drawn and pieces positioned for what increasingly seems like an inevitable new Cold War conflict to come.