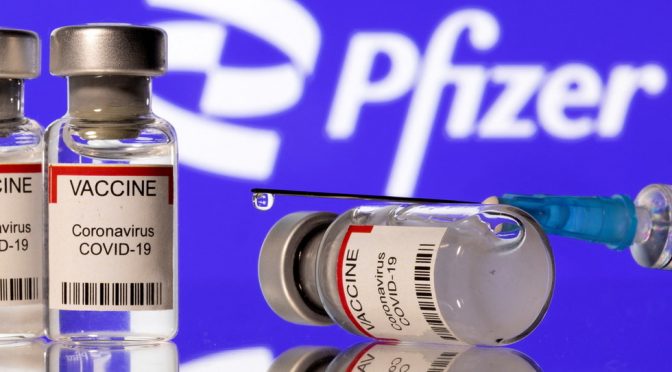 Documents released by the Food and Drug Administration (FDA) reveal that drugmaker Pfizer recorded nearly 160,000 adverse reactions to its Covid-19 vaccine in the initial months of its rollout.

The documents were obtained by a group of doctors, professors, and journalists calling themselves Public Health and Medical Professionals for Transparency, who filed a Freedom of Information Act (FOIA) request with the FDA for their release.

The first tranche of documents reveal that, as of February 2021, when Pfizer’s shot was being rolled out worldwide on an emergency basis, the drugmaker had compiled more than 42,000 case reports detailing nearly 160,000 adverse reactions to the jab.

These reactions ranged from the mild to the severe, and 1,223 were fatal. The majority of these case reports involved people aged between 31 and 50 in the United States.

More than 25,000 nervous system disorders were reported, along with 17,000 musculoskeletal and connective tissue disorders and 14,000 gastrointestinal disorders. A range of different autoimmune conditions were reported, along with some peculiar maladies, including 270 “spontaneous abortions,” and incidences of herpes, epilepsy, heart failure and strokes, among thousands of others.

These side effects were previously known, and have all been logged on the Centers for Disease Control and Prevention’s Vaccine Adverse Event Reporting System (VAERS) database, which as of Sunday has tracked 3,300 deaths following vaccination with Pfizer’s vaccine, a figure broadly in keeping with the company’s own data.

Critics say that some of these deaths cannot be conclusively linked to vaccination, while others argue that the true number of deaths and adverse effects is underreported.

Critically, Pfizer’s documents were used by the FDA to declare the company’s jab safe, which it did for Americans aged 16 and older in August. It has since been approved for children as young as five, and booster doses for people aged 16 and up were approved last week.

In the face of the more transmissible and apparently more vaccine-resistant Omicron strain of the coronavirus, the US government has continued to tout vaccination as key to defeating Covid-19. So too has Pfizer CEO Albert Bourla, who said on Wednesday that a fourth shot of his company’s vaccine may be needed to keep immunity levels up.

With one South African study showing Pfizer’s vaccine up to 40 times less effective against Omicron than previous variants, the company says it could have an Omicron-specific vaccine on the market by March 2022.