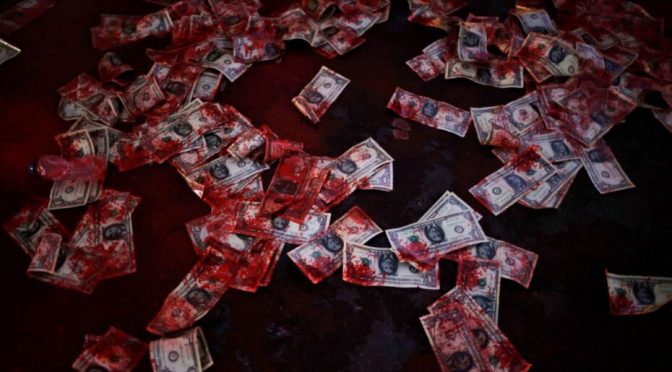 The US dollar’s dominance as the world’s reserve currency is under threat, and that’s why Washington wants Russia to invade Ukraine.

For months now we’ve been hearing Washington ring alarm bells regarding what they have cited as an “imminent Russian invasion of Ukraine.” According to the latest so-called US “intelligence,” a full-scale invasion would take place this week. Yet, as some of us have for months insisted would be the case, no invasion has transpired, nor, I believe, is one likely.

Moscow, which has announced that its troops are pulling back from Russia’s border with Ukraine, has consistently denied that it has any intention of invading. But Washington, with its repeated accusations regarding an imminent false-flag incident, to its stationing of troops in Eastern Europe, has appeared desperate to goad Russia into making such a move. The more Russia’s President Vladimir Putin refuses to take the bait, the greater the despair in Washington.

Why is Washington – and by extension NATO and the EU – so obsessed with Ukraine? What is it that they hope to achieve? Once one understands the mechanism by which Washington derives its real power, its actions in relation to Russia become easier to understand.

Let’s put aside all the bluster Washington spews regarding human rights, democracy and sovereignty, because these are just issues which it uses as cover and which it routinely disregards itself in order to achieve its aims. What is it that Washington really wants?

It wants to conflate and stoke the Ukraine issue in order to contain Russia. Why does it want to contain Russia? Well, Washington derives its global power through its control of the US dollar, also known as the world’s reserve currency. This special status enables Washington to amass obscene deficits that do not in any way reflect America’s true productive capacity.

The US dollar has been utterly dominant as the currency used for international trade since it replaced sterling in the 1920s. Commodities such as oil, gold, base metals and agricultural products are priced in, and paid for, in dollars. This created large worldwide demand for the greenback, adding massive value to its worth, and created strong demand for US Treasuries. All this enables the American federal government to print dollars by the trillions, borrow without limit, and spend with abandon.

The dominance of the dollar has afforded America great global power, but it is now under threat as never before as Russia, China and others economically challenge the US. Many are now seeking to ditch their dependence on the dollar as Washington has continued to abuse it’s status as issuer of the world’s reserve currency over the decades.

Russia and China have, in particular, drastically cut their use of the dollar. In 2015, around 90% of their bilateral transactions were conducted in dollars. But since the start of the US-China trade war, that’s fallen to 46% and is rapidly declining further. Even US allies and partners, like Turkey and India, have begun trading in their respective national currencies when it suits them. Countries are questioning why US financial institutions should serve as the intermediaries for international banking.

Beijing is actively encouraging the use of its currency, the renminbi, in trade transactions, especially under its massive Belt and Road Initiative. With China recovering more strongly than the other big economies from Covid-19, foreign capital has been flooding in, too, as Beijing opens its financial markets.

Alexey Maslov, director of the Institute of Far Eastern Studies at the Russian Academy of Sciences, has told The Nikkei Asian Review that the Russia-China “dedollarization” was approaching a “breakthrough moment” that could elevate their relationship to a de-facto alliance.

This alliance, and its threat to the supremacy of the dollar, deeply worries Washington. “The current dollar-centric system cannot continue forever,” says Barry Eichengreen, Professor of Economics and Political Science, University of California, Berkeley. “A multipolar international monetary and financial system is coming, as the United States accounts for a declining share of the global economy.”

Goldman Sachs strategists have predicted that there are now “real concerns around the longevity of the US dollar as a reserve currency,” while billionaire US fund manager Stanley Druckenmiller has warned that the dollar could cease to be the predominant global reserve currency within 15 years.

Ironically, America’s growing use of severe sanctions against countries it doesn’t like, such as China and Russia, has fuelled this trend, as countries seek new ways of financing trade without Washington having the ability to seize their money. “The U.S., by continuously using sanctions, is beginning to cut off its nose to spite its face,” Anuradha Chenoy, formerly the dean of Jawaharlal Nehru University’s School of International Studies in New Delhi, has said.

I discussed all of this in detail in a piece for RT DE (Germany) in April, 2021, entitled Nord Stream 2 – The real reason for the US government’s revulsion:

“…The United States government, as the issuer of the world’s reserve currency, is only interested in one thing: the proliferation of the US dollar. This single fact is all one needs to grasp to truly understand US foreign policy.

“What does this mean in practice? It means that the US government, in collusion with the Federal Reserve, has the ability to print the US dollar at will… and can export its inflation to the rest of the nations of the world. Any nation that wishes to engage in international trade, including the purchase of commodities such as natural gas or oil, must maintain massive US dollar reserves to enable its purchases.

“The world, in effect, acts as a sponge to absorb US inflation, allowing the US government to amass obscene deficits that enable a massive military budget and enrich a very small portion of the US population at the expense not only of the world’s population, but also of the American working class.

“As for any nation that wants to break free of the US dollar, we know all too well what the US has in store for them…This is where the Russian Federation comes in. If one really wants to understand why the US establishment hates Russia under Vladimir Putin, all one must do is understand the dollar’s role in the world. Russia is a direct threat to the proliferation of the US dollar.

“For its part, the Russian Federation has become quite resilient over the last 20 years and much less susceptible to any outside pressure or influence… Russia is a sovereign nation that is not intimidated by the United States.

“The United States cannot simply launch a military strike against the Russian Federation as it did in Iraq and many other nations that rejected dollar hegemony. Russia now has the power to prevent the proliferation of the US dollar. To return to the sponge analogy: Russia is reducing the size of the sponge. This leaves the US government with a smaller and smaller number of countries to export dollar inflation to. The smaller the sponge becomes, the more desperate US foreign policy becomes, as US leaders try by all means to preserve their grip on world power…”

Any nation that does not abide by Washington’s edicts and refuses to play the dollar game is met with a color revolution, a coup, a false flag or brute military force. Washington knows that if more and more of those dollars held in foreign reserves become superfluous, they will make their way back to the US to compound inflationary pressures there. This is the main reason, for example, why Washington is so vehemently against the Nord Stream 2 gas pipeline: because the Russians and the Germans together will determine the pricing mechanism, not Washington.

The nations of the world should have the sovereign right to choose which currency they choose to trade in and not be forced, at the barrel of a US gun, to use the US dollar.

This is the real reason Washington is hell-bent on drawing Russian forces into Ukraine. Washington must attempt, by any means possible, to contain Russia and then to try to force her into subjugation, i.e. full and total acceptance of US dollar hegemony upon her.

But, after decades of abuse, the current dollar-based monetary system is running on fumes. Interest rates have been artificially manipulated to zero, western central banks are monetizing debt via quantitative easing at pace, and consumer prices are skyrocketing as a function of inflating the monetary base.

Washington will continue to do anything required to continue the dollar’s supremacy, including using Ukraine and the Ukrainian people as cannon fodder in its efforts to provoke Russia and force dollar hegemony on her. Washington wants to further isolate Russia from the West by painting her as a violent aggressor. I am confident Vladimir Putin will not be lured in.

Thomas J. Penn is a US citizen and has lived in Germany for many years. He was a non-commissioned infantry officer in the US Army. He studied finance and management and has extensive experience in the financial markets.