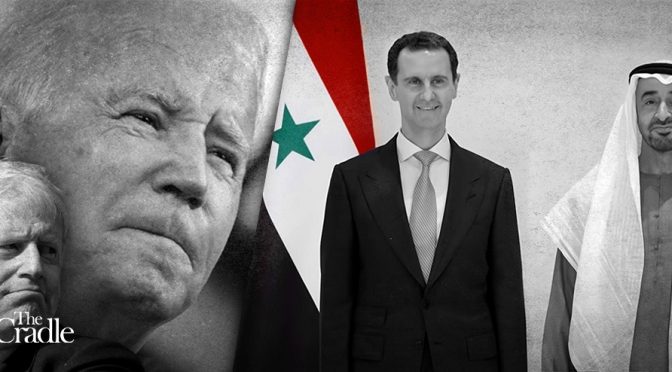 The rapid-fire ‘messages’ directed at Washington from old Persian Gulf allies are brutal, and strongly suggest that the days of US hegemony are done.

If any good has come out of the Ukraine war for the Arab world, it is the diminished status and influence of the US in West Asia. Washington is losing many of its traditional allies in the region, especially in the Persian Gulf, and this trend looks like it will accelerate.

First, Syrian President Bashar al-Assad’s visit to the UAE on Friday. The warm welcome laid on for him by its leaders was a slap in the face of the US administration, its strongly stated objections to the visit, and its sanctions aimed at de-legitimizing the Syrian government.

Second, the growing defiance of US hegemony by Saudi Arabia and the UAE, OPEC’s two largest oil producers. Most notable was their rejection of US President Joe Biden’s pleas to increase oil production in order to push down prices and provide extra supplies to enable western sanctions of Russian oil and gas imports.

Third, the failure of British Prime Minister Boris Johnson’s visit – on Washington’s behalf – to Abu Dhabi and Riyadh, where he conveyed veiled threats to the two countries should they fail to toe the western line on Ukraine, join in imposing economic sanctions on Russia, or break their oil production agreements with it.

Fourth, Saudi Arabia’s invitation to China’s President Xi Jinping for an official visit and Riyadh’s openness to pricing its oil sales to Beijing in yuan. This signals that the kingdom and possibly other Gulf states may be willing to join the new global financial system Russia and China are developing as an alternative to the western one.

Of the four developments, the reception accorded to President Assad in Abu Dhabi and Dubai was the clearest sign of this Gulf rebellion against the US and its domination. The visit didn’t need to take place now; that it did shows more about the mood in the Gulf centers of power than anything else.

Moreover, Saudi Arabia and the UAE have reportedly declined to receive US Secretary of State Anthony Blinken, who is keen to follow up Johnson’s visit to try to succeed where he failed.

Instead, in a snub seen around the world, the UAE’s foreign minister Sheikh Ahmad Bin Zayed visited Moscow for talks with his Russian counterpart Sergey Lavrov. The public show of bonhomie they displayed was bound to rub salt into the American wound.

The timing of Assad’s trip – on the 11th anniversary of the start of the US-led war on Syria aimed at toppling its government, and three weeks into the Russian invasion of Ukraine – and the UAE’s indifference to the angry US reaction, are further signs of the start of divorce proceedings with an abusive partner that fleeces and cheats on its allies.

Assad’s visit to the UAE provided important gains for both countries and their leaders. It broke Syria’s official isolation in the Arab world and heralded the breaking of the US embargo imposed on the country. This caps a broader process of Arab ‘normalization’ which is set to see Damascus regain its membership of the Arab League and role in collective Arab decision making, and take part in the Arab summit to be held in Algiers in November.

This bold step also benefits the UAE in many ways. It helps offset the hugely negative impact on its image that resulted from its signing of the so-called Abraham Accords and enthusiastic courtship of the Israeli enemy.

Building bridges of trust and cooperation with the Axis of Resistance via Syria, Iran’s closest ally, could also help the UAE and Saudi Arabia find ways out of their quagmire in Yemen. It may be no coincidence that Riyadh is proposing to host an all-party Yemeni dialogue and has officially invited the Houthi Ansarullah movement to take part.

In short, what we are seeing today are manifestations of a revolt against US hegemony in the Arab world by the axis of Arab ‘moderation’ led by the Egyptian-Emirati-Saudi trio. It is open for other Gulf and Arab states such as Iraq, Algeria, and Sudan to join should they wish. This new axis may take clearer shape at the Algiers summit in the fall.

The process of Arab normalization with Israel is bound to slow down. It is the most grievous error that normalizing countries – old and new – could have made, and should be halted completely. But there is optimism in this regard, as turning against the US also implies turning against Israel.

Meanwhile, Assad’s presidential plane, which over the past decade has only flown to Moscow and Tehran, looks set to do a lot more traveling in the coming weeks and months. Its next destination after Abu Dhabi could be Riyadh or Cairo, despite the best efforts of the US to bar its way.

Abdel Bari Atwan was born in Gaza, Palestine and has lived in London since 1979. The founder and editor in chief of Raialyoum since 2013, Abdel Bari was previously the editor of London-based Al-Quds al-Arabi, an independent, pan-Arab daily newspaper since 1989. He is the author of several books, including the bestselling ‘The Secret History of al-Qa’ida,’ a prolific contributor to international media outlets – TV and print – and lectures worldwide.