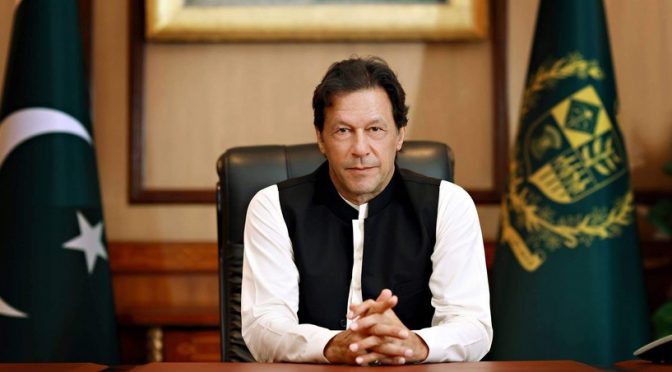 For the first time in the history of Pakistan’s parliament, its members chanted “Death to America” as they rejected a no-confidence vote, which sought to oust Prime Minister Khan, saying “foreign powers” are interfering in the country’s democratic process.

Qasim Khan Suri, the National Assembly deputy speaker, dismissed the no-trust move against the prime minister on Sunday, terming it as “contradictory” to Article 5 of Pakistan’s Constitution.

Suri said that the motion was presented on March 8 and should be conducted according to the law and the Constitution, stressing, “No foreign power shall be allowed to topple an elected government through a conspiracy.”

“The President of Pakistan, Dr. Arif Alvi, has approved the advice of the Prime Minister,” a statement from his office said, meaning fresh elections must be held within 90 days.

Khan on Saturday accused the United States of being behind the parliamentary the no-confidence motion, calling it an attempt at regime change backed by Washington.

The Pakistani PM had earlier accused an unnamed “foreign power” – in a clear reference to the United States – of funding a “conspiracy” to topple his democratically-elected government.

Addressing a large rally in the capital Islamabad last week, Khan said the “foreign power” sent millions of dollars to opposition parties to launch a no-confidence vote against him in the parliament.

“That ‘foreign power’ hasn’t been doing too well lately,” New York-based journalist Don DeBar said, adding “You can call it ‘Empire Collapse.’ They’re 0 for 3 in the past year alone. And their efforts in the last past few years haven’t been a tremendous success, either.”

“Last year, they failed in Belarus and Kazakhstan. They also failed in Honduras – the 2009 coup was undone in the election earlier this year and their attempted coup in the legislature also failed,” DeBar said.

And the analyst provided some additional examples.

“They’re even seeing rebellion in the EU,” he said. “Even though they have Brussels in their pocket, Hungary is dissenting and Poland is having some doubts, although they are allowing the Maidan coup government to use Warsaw, as their version of Vichy, which was the capital of France during the Nazi occupation during WW II. The attempted coup in Cuba failed before that. And the attempted coup in Nicaragua failed. They were able to capture Ecuador by buying off the designated successor to Correa, and that has also become a dead-end.”

DeBar continued to list the failures of the CIA – “The coup d’etat in Bolivia was very short-lived. Lula is now poised to win the next election in Bolivia. And Cristina Fernández de Kirchner, the former president of Argentina, was returned to power in the 2019 election, this time as vice president.”

The radio journalist concluded by pointing to the big picture items that have been unfolding of late. “Governments representing more than half of the population of the world are refusing to stand with the US in condemning Russia’s actions in Ukraine, and are also refusing sanctions. In fact, the sanctions regime is so full of holes that the Little Dutch boy needs four or five extra arms to plug them all. To me, this indicates the Empire’s days as hegemon are over.”Pakistan PM Imran Khan accuses US of funding ‘conspiracy’ to topple his governmentPakistan

Imran Khan, who had formed a coalition government after winning the election in 2018, said he was the subject of a “foreign conspiracy” aimed at dislodging his government and that “funding was being channeled into Pakistan from abroad.”

“We have been threatened in writing but we will not compromise on national interests,” said Khan, who met with Vladimir Putin in Moscow on February 24, the same day the Russian leader ordered a military operation in neighboring Ukraine.

Before that, Khan visited Beijing in January, defying US President Joe Biden’s call for a diplomatic boycott of the Winter Olympics.

“The money is from abroad and the people that are being used are ours (Pakistan’s). Some of them unknowingly, and some knowingly, are using this money against us,” the prime minister said.

“Attempts are being made to influence our foreign policy from abroad. We have been aware of this conspiracy for months. We also know about those who have assembled these people (the opposition parties) but the time has changed. This is not the era of Zulfikar Ali Bhutto,” he said, referring to the former prime minister of Pakistan who was allegedly threatened by former US Secretary of State Henry Kissinger over the country’s nuclear program.

Bhutto’s government was toppled and he was hanged by the military in 1979.

Press TV is Iran’s first 24/7 international television news network that broadcasts in English. It started broadcasting in earnest in June 2007.