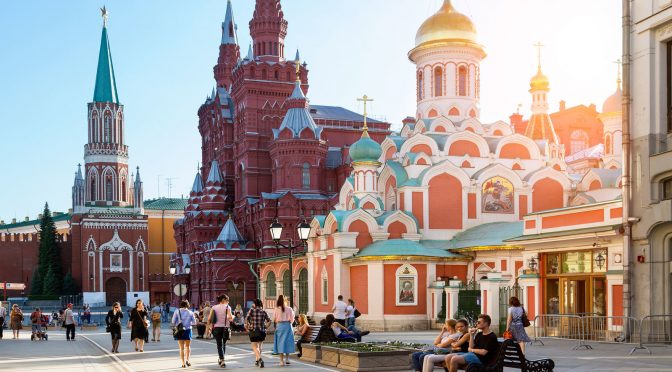 Renewing the strategies of Germany during the First World War and of the United States and the Ukrainian integral nationalists during the Cold War, the Westerners have just created a Forum of the free peoples of Russia. The aim is to prolong the break-up of the USSR, to create separatist movements and, ultimately, to proclaim the independence of twenty regions of the country.

At the beginning of the 20th century, before the world wars, Central Europe was deeply unstable. Two powers clashed in this great plain: in the West, the German and Austro-Hungarian Empires, in the East, the Russian Empire. The populations were invited to choose their protector, knowing that the borders had been modified many times and that none seemed definitive.

The Russian Empire had remained blocked for several centuries, leaving its subjects in a situation of ignorance and complete misery, while the German Empire had become the main scientific center of the world and was developing at great speed. Therefore, most Central European intellectuals chose to support Germany rather than Russia.

During the First World War, the German and Austro-Hungarian foreign ministries launched a joint secret operation: the creation of the League of Allogenic Peoples of Russia (Liga der Fremdvölker Rußlands – LFR) [1]. They recruited many high-level intellectuals to lead it. The aim was to implode the Russian Empire by creating separatist movements. The League called on the United States (which did not enter the war until 1917) to liberate the enslaved peoples.

Dmytro Dontsov, the future founder of “Ukrainian integral nationalism” [2], supported this movement and even became its employee. He shamelessly directed the Bern branch and edited the monthly Bulletin des nationalités de Russie in French.

THE UNITED STATES AGAINST THE SOVIET UNION

In addition, at the end of World War II, the OSS, and later the CIA, organized the transfer of anti-communist leaders from the Axis to the Third World and recycled them into various governments. They created an Asian Peoples’ Anti-Communist League around the Chinese Chiang Kai-shek, then a World Anti-Communist League (WACL), with the support of the former Ukrainian full nationalist Prime Minister, the Nazi Yaroslav Stetsko [3]. This secret organization, whose headquarters are still in Taiwan, was renamed the World League for Freedom and Democracy in 1990.

It is no coincidence that the war in Ukraine is followed by provocations in Taiwan, but the logical extension of this strategy. The League is always financed by the Taiwanese secret service and its actions are covered by the defense secret.

Ukrainian integral nationalist Dmytro Yarosh created in Ternopol (Western Ukraine) in 2007 – that is, under the presidency of Viktor Yushchenko – an “Anti-Imperialist Front”, an organization aimed at blowing up the Russian Federation. But whereas the attempts of the 1910s were based on the appeal of the German Empire and those of the Cold War on anti-communism, this third operation relied on jihadists [4].

The first Islamic emir of Itchkeria (Chechnya), Doku Umarov, should have participated, but he was wanted worldwide and could not get out of Russia. He sent a message of support and was elected co-chairman of the organization. In addition to the above-mentioned, he was elected co-chairman of the organization. Jihadists from Crimea, Adygea, Dagestan, Ingushetia, Kabardino-Balkaria, Karachaevo-Cherkessia and Ossetia came to the meeting.

Dmytro Yarosh and many Ukrainian integral nationalists fought in Chechnya on the side of the Islamic Emirate of Itchkeria. At the time, the Western press spoke of a national liberation movement and ignored the imposition of Sharia law by Doku Umarov.

THE FORUM OF FREE PEOPLES OF RUSSIA

Today, when Dontsov’s works are required reading for the 120,000 soldiers of the Ukrainian integral nationalist militias and Dmytro Yarosh has become an advisor to the commander-in-chief of the Ukrainian armies, an unidentified sponsor – presumably the German BND, the U.S. CIA and the Ukrainian SBU – organized a Forum of Free Nations of Russia in Prague on July 23-24, 2022 [5].

It seems that the SBU was reluctant to participate and that this was one of the reasons that led the US to recommend to President Volodymyr Zelenskyy to dismiss its director.

The term “Free Peoples” is the one used by Ukrainian integral nationalists, including the Ukrainian economist Lev Dobriansky. Dobriansky founded the National Captive Nations Committee with President Dwight Eisenhower and Yaroslav Stetsko, and later helped found the World Anti-Communist League. His daughter, Paula Dobriansky, played a central role in the propaganda apparatus of the State Department and the Thomson Reuters news agency. She served as Under Secretary of State for Global Affairs during the presidency of George W. Bush. President Donald Trump opposed her appointment as Under Secretary of State for Political Affairs.

The Free Peoples’ Forum of Russia uses the argument of peoples’ self-determination to justify a partition of Russia. When the USSR was dissolved, fifteen separate states were freed, including the Russian Federation. The idea is to extend this partition, this time creating twenty more states. This would not only create new states in the Caucasus, but also completely change the map of Siberia, that is, the marches of China.

However, if there is a real problem of development in some regions of Russia, it is being solved with the creation of new communication routes, first East-West, then for the last ten years, North-South. The peoples that the BND, the CIA and the SBU wish to “liberate” have never expressed their desire to leave the Russian Federation, with the exception of Chechnya, which is now at peace.

Again, it is no coincidence that the Russian army is emphasizing the place of its Chechen units in its special military operation against the Ukrainian “Nazis” in Donbass [I prefer the term “Ukrainian integral nationalists”]. This is a way for her to remind that she has satisfied the Chechen demands after two terrible wars. Similarly, the President of the Chechen Republic, Ramzan Kadyrov, calls on his people to take revenge for the abuses committed in his country by Ukrainian integral nationalists.

On August 15, 2022, President Vladimir Putin, who is acutely aware of this Western strategy, announced the convening of a world anti-Nazi conference in Moscow.

[2] In previous articles, I have used the term “Nazi” to describe this school of thought. However, this term is incorrect insofar as these are two distinct ideologies. Then, I used the term “banderists”. But it is not more adequate insofar as it refers to the context of the Second World War. I therefore now use the expression “integral nationalists” that those who lay claim to be so claim. It refers to the writings of the Frenchman Charles Maurras and especially to those of the Ukrainian Dmytro Dontsov. However, the first was Germanophobe while the second was Germanophile. [3] “The World Anti-Communist League: the Internationale of Crime”, by Thierry Meyssan, Translation Anoosha Boralessa, Voltaire Network, 12 May 2004. [4] “The CIA Coordinates Nazis and Jihadists”, by Thierry Meyssan, Translation Roger Lagassé, Al-Watan (Syria) , Voltaire Network, 19 May 2014. [5] “Declaration about the decolonization of Russia”, Voltaire Network, 24 July 2022.

One thought on “The Western Strategy to Dismantle the Russian Federation”