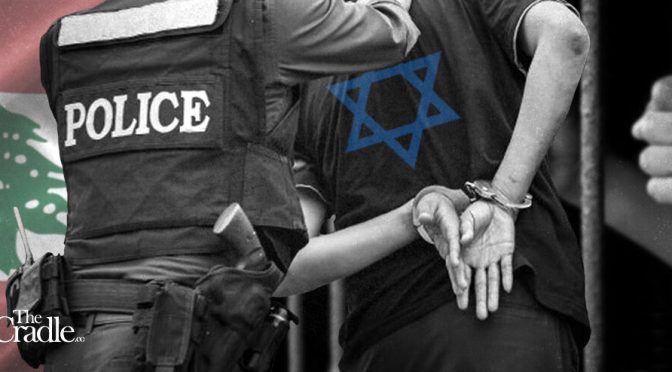 Hundreds of Lebanese detainees have been released, despite the serious charges of espionage on behalf of Israel.

In the past few months, Lebanese security services have arrested more than 100 people implicated in alleged Israeli spy networks. Among these were young women tasked with photographing locations in the predominantly Shia southern suburbs of Beirut, the main stronghold of Hezbollah, and the primarily Sunni neighborhood of Tariq Al-Jadida in the western part of the city.

Working for the Israelis

According to investigations carried out by Lebanese security services, most of the detainees had applied online for employment opportunities, before being contacted from phone numbers belonging to Israeli citizens. Some of the accused were asked to buy local SIM cards and send them to addresses abroad.

For months now, Lebanon has been subjected to an unprecedented covert Israeli assault, during which Israel’s spy agency Mossad has recruited hundreds of Lebanese citizens to do its dirty work.

This uptick in espionage activity in the country is no coincidence. Under the guise of private companies looking for employees, the Israeli Mossad is taking advantage of the difficult economic crisis that Lebanon is going through to recruit agents and assign them intelligence gathering missions.

But what is most remarkable is the performance of Lebanon’s military judiciary, which has issued lenient sentences and quick verdicts to acquit many of those arrested. Is this a sign of creeping normalization with the Israeli enemy, beginning with the state’s judicial system? Or have the military courts been tasked to ignore these cases for different reasons?

As mentioned, the Lebanese security services arrested a number of suspects who were assigned to photograph buildings and cars in the southern suburbs of Beirut (Dahiyeh). The investigations revealed that some of these detainees were assigned seemingly mundane tasks to test their willingness to cooperate with Israeli intelligence.

Among those arrested was an individual known only as Layal R., who took photos of streets in Dahiyeh, and of apartments in the Tariq Al-Jadida area, said to be inhabited by leaders of the Palestinian Hamas movement.

As Tariq Al-Jadida is a predominantly Sunni area, adjacent to Shiite-majority Dahiyeh, the Israelis may have been keen to assign tasks in these areas in preparation for igniting future sectarian clashes.

According to security sources, Mohammad published anti-Hezbollah propaganda at Israel’s behest for three Lebanese online news outlets: Lebanon 24, VDL News, and Alkalima Online. But the military court acquitted him by claiming Mohammad was unaware that Israel was his benefactor, despite Lebanese investigators discovering the exact opposite.

Amir Z., another detainee, was tasked with photographing the names of the apartment owners listed on the interphones of buildings in Dahiyeh, while detainee Muhammad B. was responsible for establishing commercial companies on behalf of his recruiters.

Investigations show that one of the detainees was in the process of opening a store to sell cell phones containing spy applications planted by Israeli intelligence, and that another detainee worked under the cover of a humanitarian association, tasked with monitoring apartments of Hamas members in Dahiyeh.

An official Hamas source told the The Cradle that the resistance movement is fully aware that it is under surveillance by Israel’s Lebanese spy network, and that its leaders and members are monitored by Israel everywhere.

This is confirmed by previous attempts to assassinate Hamas officials in Lebanon. The source added that this surveillance has increased in recent years, as Hamas strengthens its relations with Hezbollah and the Axis of Resistance.

The Israelis fear that Hamas will increase its influence in the Palestinian refugee camps in Lebanon, enabling it to build military bases used to carry out attacks from outside occupied Palestine.

The Palestinian Islamic Jihad (PIJ) is another resistance faction whose leaders and members’ homes detainees were assigned to photograph. A prominent PIJ source told The Cradle that Israeli intelligence has a target list of leaders from all the resistance factions.

He added that PIJ has been under Israeli target for quite some time, recalling the assassination of two PIJ leaders, brothers Mahmoud and Nidal Al-Majzoub, in the southern city of Sidon on 26 June, 2006, in an operation carried out by Israeli intelligence officers.

It was discovered that some of the detainees received sums of money ranging from $100 to $200, through money transfers, in exchange for providing their recruiters with information over social media.

Not all were lured by cash incentives during these times of economic hardship. Others worked for the Mossad, not out of financial motive, but out of political or sectarian hatred for Hezbollah, which they blame for “destroying” the country and accuse of being an Iranian proxy.

Investigators also found that some of the suspects underwent courses in photography, surveillance, and polygraph tests.

Among them was Elijah al-Rayes (arrested on 15 January 2022), who confessed that he met Israeli intelligence officers in the Georgian capital, Tbilisi. Although he admitted receiving $1,500, he claimed that he had no idea that he was working for Israeli intelligence until his Israeli recruiter “Ziad” subjected him to a lie detector test.

Rayes denied that he had known in advance that he would undergo this test. But a review of his cell phone records showed that he had conducted an internet search on how to cheat a lie detector, which suggests otherwise.

Despite this, the military court acquitted Rayes due to “insufficient evidence.” The same applies to Asaad Al-Hakim (arrested on 24 January), who was also acquitted on the same grounds.

The Lebanese judiciary’s performance in these cases raise many questions. Judges belted through these espionage trials and issued judgments with unprecedented speed, and did not bother to thoroughly interrogate the detainees.

A large number of their judicial rulings do not exceed two or three pages, which is highly unusual in this type of serious crime. A number of suspects were not even tried due to “lack of evidence,” although most of them were suspected of working for Israeli intelligence because of the specific security nature of their assigned tasks.

This is extremely unusual in the history of Lebanon’s military courts. Sentences in such cases usually range from 5 to 15 years in prison. To any keen observer, it looks like a decision was made by senior military and/or political officials to sweep the Israeli espionage cases under the carpet.

In September 2019, 57-year-old Lebanese-American Amer Fakhoury was detained in Lebanon after being accused of overseeing the torture of Lebanese civilians at the notorious Al-Khiam prison. His crimes were committed in south Lebanon in the 1980s and 1990s, as part of Fakhoury’s role with the Israel-backed Southern Lebanon Army (SLA) militia during Israel’s occupation of the country.

Fakhoury was known among the prison’s former detainees as “the Butcher of Khiam.” The case prompted US senators Ted Cruz and Jeanne Shaheen to introduce a bill that would sanction Lebanese officials involved in detaining US citizens in Lebanon.

Under pressure from Washington, the Lebanese military court acquitted Fakhoury on March 2020, citing the expiry of the statute of limitations – in a move that drew furious criticism from local media and politicians alike. The US went as far as to violate Lebanese sovereignty when they sent a helicopter to transport Fakhoury out of Lebanon.

Fakhoury died shortly after returning to the US, and his family have reportedly sought to sue Lebanon’s security forces, ironically claiming that his arrest and “torture” contributed to Fakhoury’s illness – stage 4 lymphoma – while under imprisonment.

Treachery ignored, to what end?

On 18 July 2022, The Lebanese Directorate of General Security arrested the Maronite Archbishop of Haifa and the Holy Land, Moussa al-Hajj, at the Naqoura border crossing between Lebanon and occupied Palestine.

Al-Hajj was caught while attempting to smuggle $460,000 and €4,000 in cash, and a car-load of pharmaceuticals from Israel into Lebanon. The smuggling attempt constitutes a major violation of both Lebanese law and the Arab boycott laws.

The Lebanese archbishop was questioned by security services for 12 hours upon his arrest, only to be released as a result of pressure exerted on the Directorate of General Security and the Lebanese Armed Forces (LAF) by the Maronite political and religious establishment.

Al-Hajj was released despite revelations that he had been smuggling cash into Lebanon from Israel on an almost monthly basis, and that the funds were used to buy land and infrastructure for former members of the now disbanded SLA.

The money brought in by al-Hajj was also destined for Mossad agents recently arrested in Lebanon, according to security reports.

Other reports reveal that the archbishop had previously been monitored by security forces because of his contacts with former SLA members who fled to Israel when the Lebanese resistance liberated south Lebanon in May 2000. For several years, al-Hajj led prayers in Israel attended by SLA members and their families.

These incidents raise many questions about the activities, intentions, and direction of Lebanon’s military court: are its rulings in matters related to Israeli spy assets operating in Lebanon a prelude to normalization? Or are they wholly related to the state’s lack of sovereignty, and the exceptional US leverage over the Lebanese military to which Washington has directly paid hundreds of millions of dollars?

Radwan Murtada is a Beirut-based journalist who has written for Al Akhbar since 2007 and has contributed to many foreign media outlets on political, criminal, social and judiciary affairs in Lebanon and the wider region. Radwan is a specialist on Islamic jihadist groups, and honed his connections and craft during the Syrian conflict, interviewing both Al Qaeda and ISIS leaders for various outlets. He is the founder of Blue House Film, a Beirut production company specializing in documentaries, and is the author of the book “How the Syrian Revolution Grew its Beard.” In 2020, he founded “The Hub” with a group of regional journalists and producers that provides news and media services to foreign journalists covering West Asia.